Churchill painting a view of the Sorgue River, Rance in 1948.(Getty Images)
During the Second World War, Winston Churchill produced only one painting. We should be grateful he otherwise eschewed his beloved pastime. As he wrote in a 1948 essay, “Painting is complete as a distraction. I know of nothing which, without exhausting the body, more entirely absorbs the mind. Whatever the worries of the hour or the threats of the future, once the picture has begun to flow along, there is no room for them in the mental screen. They pass out into shadow and darkness. All one’s mental light, such as it is, becomes concentrated on the task. Time stands respectfully aside, and it is only after many hesitations that luncheon knocks gruffly at the door.” Given his description of painting as fully engrossing, who knows how differently the war might have turned out had the indispensable leader given in more often to the temptation to put brush to canvas.
Churchill’s outsized role during the global struggle makes it easy to see why historians and biographers have paid scant attention to his painting—there is so much else to write about—but it was an important part of his life. Though he was 40 before he began to paint, he managed to produce about 500 canvases.
So it is fascinating to read Churchill: The Statesman as Artist—a new collection of his own writing about art, plus reviews of his work by contemporary critics, edited and introduced by David Cannadine—alongside two other new books: Andrew Roberts’s full biography and John von Heyking’s monograph about Churchill and friendship. Cannadine, Roberts, and von Heyking each mention one painting in particular—the one painting Churchill made during the war years. The story of that painting can help us better understand the interplay of friendship and painting in his life, and how both related to his greater vision in politics and war.
Churchill himself told the story in the fourth volume of his wartime memoirs. In January 1943, when Franklin Delano Roosevelt was getting ready to leave the Casablanca conference to return to the United States, Churchill stopped him and pleaded, “You cannot go all this way to North Africa without seeing Marrakech,” and then insisted, “I must be with you when you see the sunset on the snows of the Atlas Mountains.” FDR agreed. The two leaders set off on a heavily guarded, five-hour journey across the desert to Villa Taylor, the residence of American vice consul Kenneth Pendar. As Churchill related, they “talked a great deal of shop, but also touched on lighter matters.” This was just a couple of months after the Battle of Alamein, a battle so decisive that Churchill referred to it as the “hinge of fate” (the name he would confer on that volume of his memoirs). American friendship—demonstrated in the form of badly needed supplies—had been so essential in giving the British an advantage that Churchill invoked the old aphorism, “A friend in need is a friend indeed.”
When they arrived in Marrakesh, Churchill and Pendar climbed the 60 steps to the top of the villa’s tower. FDR allowed two men to carry him up; among these companions he felt comfortable enough not to hide his disability. They watched the sun set over snow-capped mountains, recalled evocatively by Pendar as a “mystical” moment, by one of the bodyguards as a “riot” of color, and by FDR as “the most breathtakingly beautiful” scene he had ever witnessed.
“He is the truest friend,” Churchill said when FDR left. “He has the farthest vision; he is the greatest man I’ve ever known.”
Churchill was so moved by his time with the American president that he decided to commemorate the moment. Almost immediately after the president departed the next day, Churchill returned to the tower, where he spent two days painting The Tower of Katoubia Mosque; he later gave it to FDR. 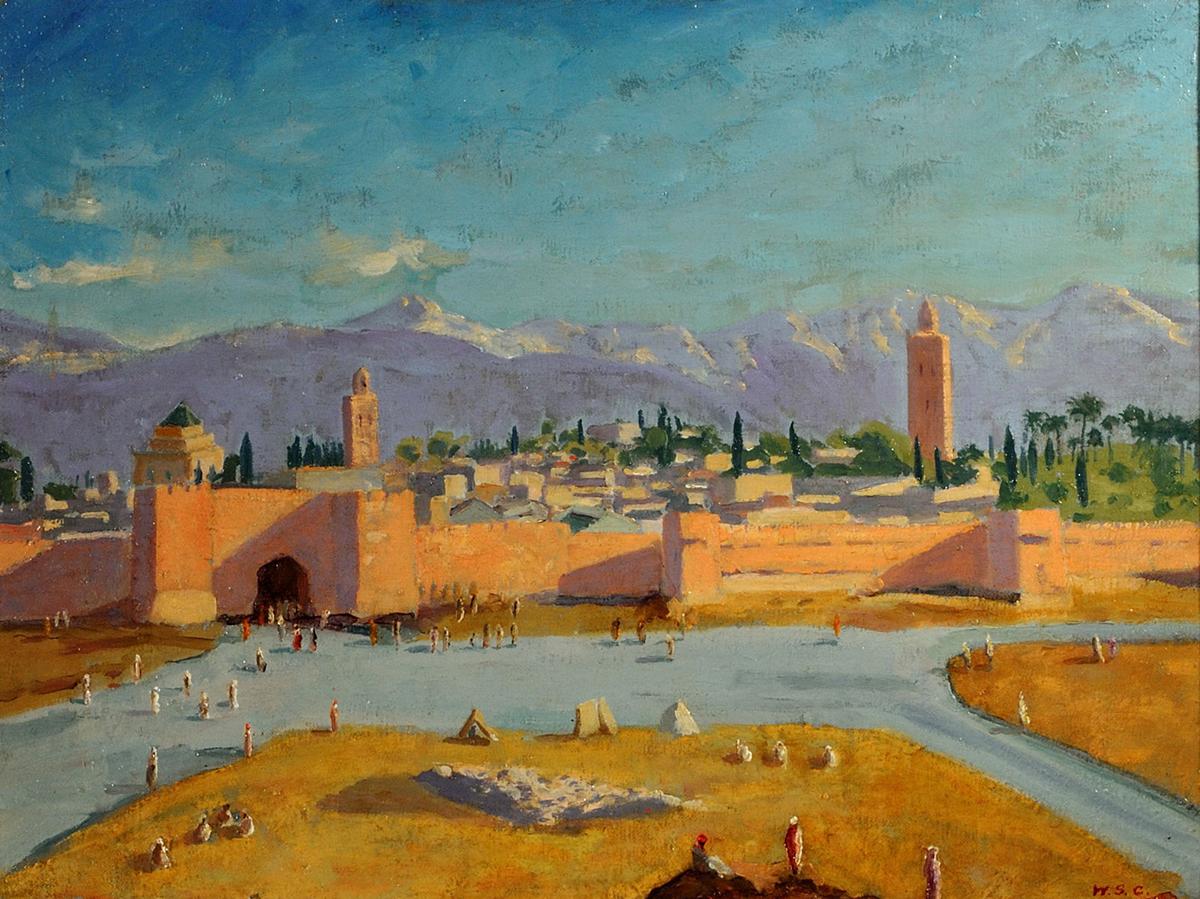 In his book’s lengthy and helpful introduction, Cannadine explains how the preoccupations of the war years kept the prime minister from painting. But he was ever the artist. Cannadine reminds readers that in the June 1940 speech famously ending “This was their finest hour,” Churchill contrasted “the abyss of a new dark age” if Hitler were to win the war with the “broad sunlit uplands” if he were to be defeated. In other words, Churchill looked to lead his country and its allies to the same vistas that he loved to paint. Marrakesh provided such a view and he insisted on experiencing it with a friend who shared that vision.
Not only did Churchill paint word-pictures with his oratory, but his whole mode of rhetorical composition, Cannadine argues, is similar to his artistic composition.

Not surprisingly, then, when Churchill later came to write about painting, he revealingly described the ideal finished canvas as resembling “a long, sustained, interlocking argument,” characterized by “a single unity of conception”—words that would equally apply to the composition and the structure of his finest orations.

These could apply, too, to his battle plans: Churchill compared fighting a battle to painting a picture, suggesting that the latter is “more exciting.”
Cannadine notes the irony that Churchill, a successful amateur artist, played such a huge role in defeating Hitler, a failed professional artist. One of the critical commentaries he includes in his book confirms Churchill’s talent. “Judged by any fair test,” art historian Thomas Bodkin wrote in 1959, Churchill “has to be regarded as a serious and accomplished painter who has won, on his merits, the right to take a place among the ranks of his professional colleagues.”
John von Heyking’s Comprehensive Judgment and Absolute Selflessness: Winston Churchill on Politics as Friendship leans heavily on philosophy and is at times quite technical. However, it fulfills the promise of its subtitle by zooming in on Churchill as friend. Remarking on the time in Marrakesh, von Heyking writes, “There they shared what Aristotle calls a joint perception of the good, the consummate act of virtue friendship.” They were taking in the whole scene, which for most friends of Churchill usually meant the entire military scene. The author reminds readers that Churchill wrote of the friendship between his great ancestor the Duke of Marlborough and Eugene of Savoy as “two bodies with one soul” and “working like two lobes of the same brain.” It is that kind of friendship that Churchill shared with FDR.


In addition to his appraisal of Churchill as friend, von Heyking points to another example of Churchill’s foresight resembling that of an artist. It should come as no surprise that Churchill had a plan for winning the war. But it is extraordinary that he sketched out his six volumes of memoirs in December 1940—before having yet lived out all the events of even the second volume. Colleagues complained that, as von Heyking puts it, “he was fighting the war simply to write the history.” Again, Churchill demonstrated the mind of an artist at work, concerned as much with eventual presentation as with current decision.
Andrew Roberts bears the most challenging task in his cradle-to-grave biography,Churchill: Walking with Destiny. In the mammoth work of some 980 pages (not counting notes and other end material), Churchill as artist plays a bit role, cropping up only a handful of times. Actually, that Churchill painted just once during the war is, at best the third most surprising fact on the relevant page of Roberts’s book. He remarks in a footnote that Churchill suffered “housemaid’s elbow” while painting The Tower of Katoubia Mosque and that Angelina Jolie currently owns the piece.