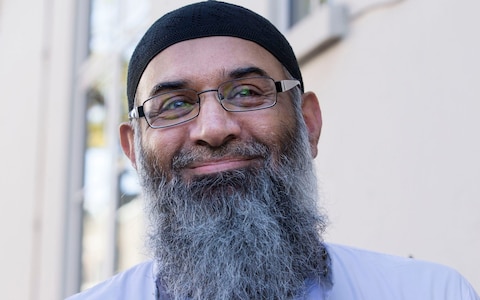 Anjem Choudary said nothing as he posed for pictures outside a probation hostel in north London after his release. CREDIT: JEFF GILBERT FOR THE TELEGRAPH

The Islamist firebrand preacher Anjem Choudary, described as Britain's "most dangerous extremist," has been released from prison after serving only half of the five-and-a-half-year sentence he received in 2016 for pledging allegiance to the Islamic State.

Prison authorities could not prevent his release: under British sentencing guidelines, prisoners — even those who are still a risk to the public — automatically become eligible for release under license (parole) after serving half their terms.


Prime Minister Theresa May has downplayed concerns over Choudary's release; British counter-terrorism authorities, however, say they are worried that he will re-exert influence on hundreds of followers upon his release. The cost to British taxpayers of keeping Choudary under surveillance is expected to exceed £2 million (€2.25 million; $2.6 million) a year, compared to the £50,000 (€57,000; $65,000) to keep him in prison.

Choudary, a 51-year-old born in Britain to Pakistani immigrants, has actively been promoting Islamic fundamentalism in Britain for more than three decades. In 1986, Choudary and an exiled preacher, Omar Bakri Mohammed, founded an Islamist group, al-Muhajiroun (Arabic: The Emigrants), a network of Salafi jihadists determined to spread Sharia law across Britain.

Al-Muhajiroun — which hailed the September 2001 jihadi attacks on the United States — was banned under the UK Terrorism Act 2000, in January 2010.

After that, al-Muhajiroun reinvented itself under an array of successor aliases. These included Islam4UK, Call to Submission, Islamic Path, Islamic Dawa Association, London School of Sharia, Muslims Against Crusades and Need4Khalifah, all of which have also been proscribed.

A November 2013 investigative report published by the anti-extremism charity Hope Not Hate concluded that al-Muhajiroun was "the single biggest gateway to terrorism in recent British history."

A September 2014 study published by the London-based Henry Jackson Societyfound that one in five terrorists convicted in Britain have had links to al-Muhajiroun.

In October 2018, during a debate in the House of Lords, Lord Anderson, a former independent reviewer of terrorism legislation, said that existing British law is insufficient to deal with Islamic radicalizers:

"Anjem Choudary has been mentioned, with good reason. As many as 25% of British jihadis convicted between 2001 and 2015 were associated with his organizations, outnumbering the 10% linked to al-Qaeda and the 5% linked to ISIS, or Daesh. His organizations also had great influence in northern Europe, yet although the police reported his activities to the Crown Prosecution Service 10 times between 2002 and 2015, no prosecution could be brought, whether for incitement to religious hatred, indirect encouragement to terrorism, inciting terrorism overseas, incitement to murder or proscription offences."

For years, Choudary, a lawyer by training, managed to stay "just within the law" by treading the fine legal line between the inflammatory rhetoric of Islamic supremacism and the right to free speech. Choudary — who called for the flag of the Islamic State to fly above Downing Street and wanted Buckingham Palace converted into a mosque and the Queen's face to be covered — was never been convicted of any offense, presumably much to the frustration of British authorities.

That scenario changed after the Islamic State proclaimed the establishment of an Islamic Caliphate in Iraq and Syria in June 2014. Police said that Choudary had become far more brazen and repeatedly crossed the legal threshold for criminal prosecution by encouraging terrorism.

In September 2014, Choudary pledged allegiance to the Islamic State anddeclared that the leader of the Islamic State, Abu Bakr al-Baghdadi, is "the caliph of all Muslims and the prince of the believers." Between June 29, 2014 and March 6, 2015, Choudary also uploaded a series of lectures on YouTube in which he invited support for the Islamic State. At the time, Choudary wasbelieved to have had links to as many as 500 jihadis who left Britain to join the Islamic State.

Police said the oath of allegiance was a "turning point" in terms of their ability to prosecute him. On September 25, 2014, Choudary and Mohammed Mizanur Rahman, of Palmers Green in London, were each charged under Section 12 of the Terrorism Act with one offense of inviting support for the Islamic State.Speaking to Sky News before his conviction, Choudary claimed that he was exercising his right to freedom of speech and had not broken the law:

"If you look at my speeches, I have said the same thing for 20 years. For me, it is a matter of worship. If people are implementing the Sharia, then I cannot shy away from what the divine text says in relationship to that. If you cannot say when you believe in something and you cannot share that view, then you don't really have freedom to express yourself in this country."

Choudary also welcomed the prospect of spending time in prison: "If they arrest me and put me in prison, I will carry on in prison. I will radicalize everyone in prison."
On July 28, 2016, following a trial at the Old Bailey, Choudary and co-defendant Rahman, were found guilty of inviting support for the Islamic State. Both were sentenced to five-and-a-half years in prison.

Choudary spent some of his sentence in a special "separation unit" for dangerous extremists inside Frankland Prison in County Durham, to limit his possible influence over other inmates. He was released from Belmarsh prison in south-east London on October 19.

It is probable that Choudary will carry on as before: During his time in prison,according to the BBC, Choudary refused to take part in deradicalization programs.

Choudary will spend the rest of his sentence on "license" (parole) in the community, as part of attempts to reintegrate him and reduce the risk of reoffending. He must comply with 25 conditions that his release team, made up of probation and police officers, believe are necessary and proportionate to manage the risk he may still pose. If he breaches them, he risks being recalled to prison.

Several British officials downplayed the significance of Choudary's release. Prime Minister Theresa May said that "obviously he's an extremist preacher" but "if and when any terrorist offender is released, well-rehearsed plans are put in place to keep the public safe."

Mark Rowley, the Metropolitan Police's former assistant commissioner and former national lead for the UK's counter-terrorism policing, said it was important not to overstate Choudary's influence:

"At the end of the day he is a pathetic groomer of others.That is what he has done in the past. He is not some sort of evil genius we all need to be afraid of. I think we have to recognize that radicalizers look to generate a profile, look to prey on the vulnerable and we need to be thoughtful about how we report their activity."

Rowley also criticized the media's elevation of individuals like Choudary:

"That is giving him a profile because these companies chase your attention through the salacious and contentious rather than through anything accurate or responsible.That is the disgrace in this and it gives people like him, who is a sad individual, more credibility and more attention than they deserve."

Others vehemently disagree. Prisons Minister Rory Stewart admitted that Choudary remains a "genuinely dangerous" individual; he added that the "completely pernicious" cleric would be watched "very, very carefully" by police and security services.


"I would describe him as a hardened terrorist, somebody who has had huge influence on the Islamist extremist scene in this country over many years. I believe we are underestimating the potency and danger of the radicalizers who don't carry knives, guns and overtly plot terrorist attacks but who pollute the minds of young Muslim men."

A former member of al-Muhajiroun, Adam Deen, who is now a director of the anti-extremist group Quilliam, warned that "it's highly unlikely that he's reformed and being out of prison he would definitely get lots of credence from his followers." Deen added:


"Restrictions are not going to stop Anjem's act. Be it middle-men or whoever, he will find a way to make an impact. I would be very surprised if he has in any way been reformed by prison. He has too much invested in his image. Some think he doesn't mean what he says, but he does. It's the scariest thing about him."


"[Choudary] is aware of what the law allows him to say and what not to say, and he rarely steps over the line. He knows how not to get himself into trouble. We were extremely lucky to find some material showing him promoting IS that allowed us to put him away. He remains a danger to anyone with whom he comes into contact — those who are vulnerable and impressionable.

"Goading is part of his strategy. He wants to drive a wedge between the Muslim community and the secular community. Terrorism is about polarizing views. Muslims are left alone by the main population and that allows extremists to thrive within that community.

"Choudary is one of the few public faces of Islamist extremism.There are not many people with his public persona, but several hundred who behind closed doors share his views. He is at the top of a hierarchical structure that at its base has about 20,000 people who are known to have contact with these hundreds of advisers."

The head of the anti-extremist group Faith Matters, Fiyaz Mughal, spoke of his interaction with an imam who was brought into prison to try to deradicalize Choudary:


"Choudary was put in containment that stops him engaging with other prisoners, but also given pastoral care to see if they could get through to him. I asked the guy who spoke to him if the de-radicalization program had worked and he said, 'No, he's got worse. He's hardened. He speaks in the mind-set of the victim. He sees himself as a martyr the state tried to silence.'"

"He [Choudary] should have served the full term. It's a terrible day for victims of the attacks he has helped incite. We need a change in the law so that anyone named as the inciter in two terrorist attacks should automatically serve the full sentence."

Only hours after Choudary arrived at a halfway house, where he will spend the next six months before being allowed to return home, he held a staged photo session. Choudary smiled and waved to the cameras — but said nothing, mindful not to breach his parole conditions, which prevent him talking to the media.

Choudary is now considering mounting a legal challenge to the strict conditions of his release, according to the Telegraph. It reported that he has applied for legal aid funding, at taxpayer expense, to bring his action against government ministers, and arguing the parole conditions breach his human rights.

Soeren Kern is a Senior Fellow at the New York-based Gatestone Institute.
Posted by jtf at 10:35 AM