Is Guilt Killing the West from Within?

A "sense of guilt" for colonialism is debasing the West from within, according to Professor Bruce Gilley, and authoritarian regimes such as Iran, Russia, China and Turkey are profiting from this weakness.

The Romans called it damnatio memoriae: the damnation of memory that resulted in destroying the portraits and even the names of the fallen emperors. The same process is now underway in the West about its colonial past. The cultural elite in the West now seem so haunted by feelings of imperialist guilt that they are no longer confident that our civilization is something to be proud of.

A sense of guilt now seems a kind of post-Christian substitute religion that seduces many Westerners. The French scholar Shmuel Trigano suggested that this ideology is turning the Westerners into "post-colonial subjects" who no longer believe in their own civilization, but instead what will destroy it: multiculturalism. In France, for example, a manifesto was launched for "a multicultural and post racial republic". The result would be, in the words of the anthropologist Jean-Loup Amselle, a "war of identities" and a clash between communities. Last month, the UK Labour Party leader Jeremy Corbyn said that, if elected Prime Minister, he would order the British Museum to return to Greece the Elgin Marbles, the frieze that had surrounded the Parthenon of Athens and one of the major attractions of the British Museum. "This whole campaign is sheer lunacy," wrote Richard Dorment. But it is a lunacy spreading all over Europe. 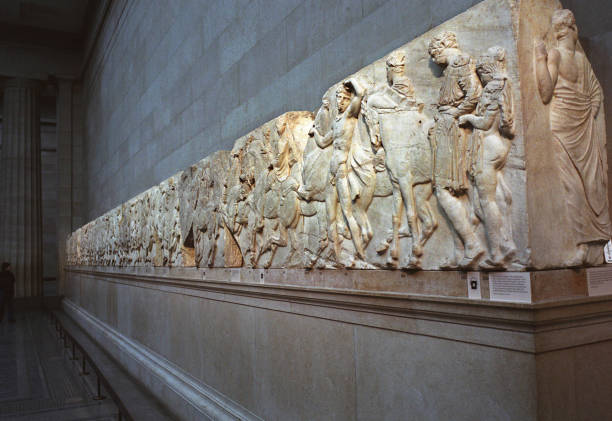 A frieze which forms part of the 'Elgin Marbles', taken from the Parthenon in Athens, Greece almost two hundred years ago by the British aristocrat, the Earl of Elgin, are on display January 21, 2002 at the British Museum in London (Getty Images)


French President Emmanuel Macron announced that he wants to change the rules that make French public collections untouchable, and allow the return to Africa of dozens of historical artifacts now in the Louvre Museum. Macron has appointed two commissioners, the writer Senegalese Felwine Sarr and the art expert Bénédicte Savoy, to prepare a report.

Tanzania is asking for the return of the famous skeleton of a prehistoric Brachiosaurus, the main attraction of Natural History Museum of Berlin. New guidelines on restitution of "colonial objects" were recently unveiled by Germany's Minister of Culture, Monika Grütters.

Most historians are now taking the side of the campaign for returning these objects. One is David Olusoga, a historian of Nigerian origins, who has claimed that these colonial artifacts were "thefts" committed by the colonial powers at the time. Writing in The Telegraph, Zareer Masani, a historian of Indian origins, took a different position. It was the colonialists, he said, who had a decisive role in preserving the antiquities of the civilization:

"It was their dedication, often at huge personal sacrifice, that unlocked the wonders of many lost classical civilisations... The fact is that we have no idea what would have become of the world's 'looted' antiquities if they hadn't been preserved in Western collections. Would the treasures of Beijing's Summer palace have survived Mao's Cultural Revolution? Would the Elgin marbles have survived Turkish tour guides chopping off chunks to sell as souvenirs? Would Daesh [ISIS] have spared those Middle Eastern artefacts that survive in European museums?".

In 1969, the BBC aired Kenneth Clark's "Civilization", the series exploring Western art and culture. Then, civilization was something to be glorified. In 2018, the BBC aired the remake of Clark's classic, "Civilizations" -- note the plural. "This year, the 21st century version of the landmark show is to turn a critical eye to the history of British civilisation, questioning whether it is built on 'looting and plunder' and who, really, are the barbarians," writes Hannah Furness in The Telegraph. One of the new presenters is David Olusoga, the historian who called the Elgin Marbles "a very clear case of theft".

Thirty years ago, in a book, The Tears of the White Man, the French philosopher Pascal Bruckner wrote that, "the remorseless and self-righteous critic who endlessly denounces the deceptions of parliamentary democracy is suddenly rapt with admiration before the atrocities committed in the name of the Koran, the Vedas, the Great Helmsman..." Since then, Western elites have excused many crimes committed in the name of political Islam, as if these were the consequences of our own colonial crimes.

When Christians in Iraq were exiled, murdered or persecuted en masse by the so-called Islamic State, the West stood silent -- as if these Christians were the agents of the Western colonialism and not the legitimate and oldest inhabitants of the Middle East long before the Arabs converted to Islam. When a mob destroyed the French Institute in Cairo, burning books and collections, those who now want to return the "colonial artifacts" stood silent. When Iran's President Rouhani visited Rome, the Italian authorities covered the naked statues in the Capitoline Museums. Are we covering our own culture to please the Islamic world?

Unfortunately, what we are "returning" are not only the colonial artifacts, but our very pride in Western civilization. A new "damnation of the memory" is taking place in our own museums, academia and chattering classes -- and it has deep consequences for our ability to deal with the enemies of civilization. "Postcolonial material provides an important fuel for jihadism," stated France's most important scholar of Islamism, Gilles Kepel.

"The Monuments Men", a film made in 2014 by George Clooney, is about a group of Western curators and art experts who traveled to Europe to rescue the artistic masterpieces stolen by the Nazis. It was a story of Western bravery and moral clarity during the Second World War. In 2015, ISIS destroyed Palmyra, one of the most important cities of the ancient world. But the West watched this cultural destruction passively and no "Monuments Men" were dispatched to save Palmyra and other threatened sites. The Russians, profiting from the Western passivity, entered Palmyra and Russia's most famous conductor, Valery Gergiev, on performing a triumphal concert in the Palmyra arena, said: "We protest against barbarians who destroyed wonderful monuments of world culture". The Westerners then recreated a banal copy of the arch of Palmyra in London.

Where are our Monuments Men now?

Giulio Meotti, Cultural Editor for Il Foglio, is an Italian journalist and author.
Posted by jtf at 6:35 AM