Richard Pipes, authority on Russia and Soviet Union, and a Reagan-era hardliner, dies at 94


By Mark Feeney and Bryan Marquard
https://www.bostonglobe.com/metro/obituaries/2018/05/17/richard-pipes-authority-russia-and-soviet-union-and-reagan-era-hardliner-dies/lSovElkZUSJ5RYLvET4dRI/story.html
May 18, 2018 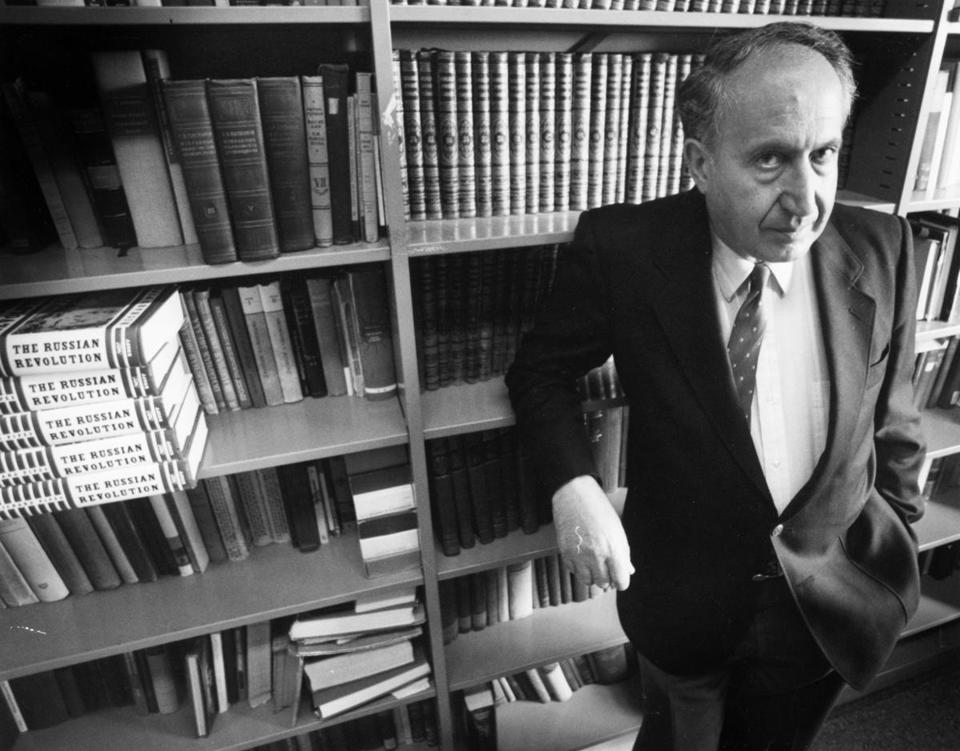 Richard Pipes, the Frank B. Baird Jr. research professor emeritus of history at Harvard University and one of the West’s foremost authorities on Russia and the Soviet Union, died Thursday in Belmont. He was 94.

Dr. Pipes was a participant in history as well as its student. He headed an outside group, which became known as Team B, brought in by the Central Intelligence Agency in 1976 to analyze Soviet strategic objectives. Its hard-line findings helped lay the foundation for Washington’s eventual abandonment of the policy of cooperation with the Soviets, known as detente, and the massive arms buildup of the Reagan years.

From 1981 to 1983, Dr. Pipes served as director of East European and Soviet Affairs for the National Security Council.

“I never made history, but I certainly played a part in historical events,” he said in a 1999 Globe interview. “It was a great experience, and I think I contributed something to destroying the Soviet regime.”


Dr. Pipes’s “The Russian Revolution” (1990) and “Russia Under the Bolshevik Regime” (1994) are widely considered the most comprehensive studies of the origins and early years of the communist assumption of power in 1917. A one-volume condensation, “A Concise History of the Russian Revolution,” was published in 1995. All three books have been widely translated.
The books on the revolution concluded a larger study that had begun with “Russia Under the Old Regime” (1974), which had emphasized the continuities between Russian and Soviet history. In all, Dr. Pipes was the author or editor of more than two dozen books, including a two-volume biography of the Russian reformer Peter Struve (1970 and 1980), “Survival Is Not Enough” (1984), “The Unknown Lenin” (1996), “Property and Freedom” (1999), and “Communism: A Brief History” (2001).
“Richard Pipes was one of the most prominent, versatile, prolific, and influential historians of Russia in the English-speaking world,” said Jonathan Daly, a professor of history at the University of Illinois Chicago. Daly is at work on an intellectual biography of Dr. Pipes.
Dr. Pipes liked to describe himself as a “conservative anarchist.” He explained why in that 1999 interview: “a conservative because I have great respect for tradition . . . an anarchist because I don’t like anyone telling me what to think.”
Scorning “revisionist” studies of the Soviet Union, with their comparatively benign interpretations of Soviet actions and aims, Dr. Pipes held a critical view of the communist regime. Indeed, the dedication of “The Russian Revolution” reads “To the victims.”
Dr. Pipes’s feelings were reciprocated. Quotations from him were banned in the Soviet press, where he was exclusively referred to as an “imperialist adept” or “antisovietchik.” When the Kremlin published a book called “Richard Pipes: Falsifier of History,” he kept a stack of copies in his office, which he would show off to visitors.
The collapse of the Soviet Union was something Dr. Pipes took great satisfaction in. “In September of ’91 I stood inside the building where the Central Committee had had its offices,” he once recalled. “A Russian standing next to me said, ‘Did you ever think this would happen?’ That was a thrilling moment.”
Dr. Pipes’s knowledge of Russia’s past made him prescient about its future.
“I was very hopeful in ’91, ’92, that they would take a more democratic course,” he said in 1999. “I don’t think there’s the slightest chance communism will come back . . . but it’s entirely possible that they’ll go to some kind of authoritarian regime — and that would be consistent with their traditions.”
Vladimir Putin was first elected in 2000.
Richard Edgar Pipes was born in Cieszyn, Poland, on July 11, 1923, the son of Mark Pipes and Sophia (Haskelberg) Pipes. Growing up in Warsaw, he was first taught German, then Polish. His initial interests were musical and artistic. As an adult, Dr. Pipes collected art, favoring prints by the renowned Japanese artist Hiroshige. One of his books was “Russia’s Itinerant Painters” (2011).
“By a combination of daring and good fortune,” as Dr. Pipes once put it, he and his parents escaped Warsaw a month after it fell to the Nazis. Guards at the Austrian-Italian border questioned the authenticity of the Pipes’s forged passports. After a long delay, the family was told they could proceed, on one condition: that they not return to German soil. “We said ‘OK,’ ” Dr. Pipes recalled in 1999, with a long, heartfelt laugh.
From Italy, Dr. Pipes and his parents went to Portugal, reaching the United States in the summer of 1940. “It was so stable,” he said in that Globe interview. “I remember reading an advertisement in Life magazine for some insurance company: ‘Unforeseen events should not affect the course of a man’s life.’ I remember thinking, ‘These people are living in the 19th century!’”
He attended Muskingum College in Ohio and Cornell University. After serving in the Army Air Force, he entered Harvard in 1946. He got his doctorate there in 1950, became a full professor in 1958, and retired in 1996. From 1968-1973, he was director of the university’s Russian Research Center.
Of the time Dr. Pipes spent in the nation’s capital, he said in 1999 that he didn’t “want to be controversial. I don’t want just to be attacked, but it happens that I very often am. I tremendously value my intellectual independence and being able to say what I want, which made life very difficult for me when I was in Washington.”
As a mentor, Dr. Pipes “gave his students great latitude, though he often suggested to them what he considered promising research topics,” said Daly, who was among his graduate students at Harvard.
“His analytical brilliance, broad learning, extraordinary productivity, and dedication to clear scholarly writing served as a model to all of us.”
Daly added that “there were tensions with some of his graduate students in the late 1960s and beyond, given Pipes’s anti-Soviet and anti-communist convictions. Yet even those of his PhD students who fell out with him over his politics universally acknowledged the great benefits they reaped from the scholarly journal ‘Kritika,’ which Dr. Pipes launched in 1964.”
A 2007 recipient of the National Humanities Medal, Dr. Pipes leaves his wife, Irene Eugenia (Roth) Pipes; two sons, Daniel of Philadelphia and Steven of New York; and four grandchildren.
A graveside service will be held Friday in Beth Israel Memorial Park, in Waltham.
In 2003, Dr. Pipes published an autobiography, “Vixi: Memoirs of a Non-Belonger.”
“There are various reasons for writing an autobiography, but for me the most important is to get to know oneself,” he wrote.
“For if one has lived to a ripe old age, as I have, one’s life is a long story whose earlier chapters are clouded in darkness,” he added. “Are we the same over these decades? Can we still understand what we have once said and done, and why? To write an autobiography is akin to doing an archeological dig, with the difference being that the digger is also the site.”
Mark Feeney can be reached at mfeeney@globe.com. Bryan Marquard can be reached atbryan.marquard@globe.com.
Posted by jtf at 8:52 AM