It’s Villanova’s world, and college basketball should be glad to be living in it 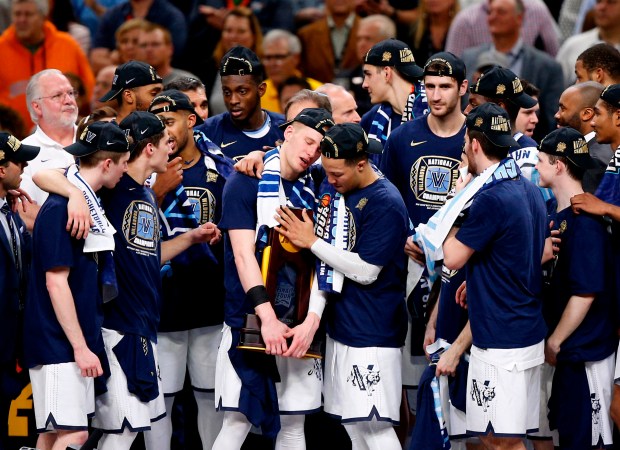 Villanova players celebrate with the trophy after beating Michigan 79-62 in the championship game of the Final Four NCAA college basketball tournament, Monday, April 2, 2018, in San Antonio. (AP Photo/Brynn Anderson)
SAN ANTONIO — In Villanova’s world, which now should be the most desired locale in college basketball, the best player on the court can be a redshirt sophomore sixth man nicknamed the Big Ragu. Donte DiVincenzo, who is Italian and redheaded and a good sport for accepting Fox broadcaster Gus Johnson’s sobriquet, can enter the NCAA men’s national championship game and shred every piece of an effective Michigan game plan with a steely performance.
In Villanova’s world, it is simply his turn to lead a balanced team. Jalen Brunson, the national player of the year, can suppress his game, watch his playing time shrink and still marvel. The rest of the team can flow with DiVincenzo as if it’s the most natural thing, as if his 31 points and driving dunks and wink-inducing three-pointers are exactly what the Wildcats expected.
In Villanova’s world, which is fascinating and enviable and potentially dynastic, the players are on stage after a 79-62 victory over Michigan, holding their second championship trophy in three seasons and turning the moment into a bromance, with expressions of love for each other and awe over what their unselfish spirit has created.


“I really can’t put my mind around it,” Coach Jay Wright said. “I never dreamt of this.”
Two titles in three seasons? At Villanova? For so long, it seemed the Wildcats should be satisfied with being a spunky overachiever, not a perennial contender but the underdog program that Rollie Massimino led to a miracle win over Georgetown in 1985. Maybe Villanova could do that once every 30 years or so. But own college basketball? Provide a blueprint for how a sport in trouble should be played by everyone? It was unimaginable, and now it’s something that must happen.
Be like Villanova? Yes, slimy college basketball peers, be like the Wildcats. Or at least try to be. Their run amounts to the most inspiring multiyear example of an unselfish championship culture and exquisite roster construction the sport has seen since Florida won back-to-back titles in 2006 and 2007. Villanova is just the eighth school to win at least two NCAA men’s basketball championships in a three-season span.
The Wildcats did it with a style that defies the one-and-done, go-for-your-money, quick-fix, build-an-instant-contender mentality that now haunts college basketball. The game needed the example of Loyola Chicago to restore the charm of amateurism during this tournament, but it was desperate for a team with the characteristics of Villanova to win the whole thing.
At the Alamodome on Monday night, you saw a final that inspired pride after a long season of scandal. To conclude a tournament filled with reminders of college basketball’s dignity — from Maryland Baltimore County’s historic upset to Loyola Chicago’s riveting Final Four run — Villanova and Michigan served as finalists that augmented a reassuring message.
As he celebrated the win, Wright made sure to say of Michigan, “We’re proud to have played them in this game.”
It’s a challenge to dislike how Villanova and Michigan are built. Long before the FBI exposed widespread corruption in the sport, they were models for sustainable winning, but their successes have been amplified in the current climate. It should be apparent now that it’s dangerous to declare any major program immune to impropriety, but you can say safely that Jay Wright and John Beilein are coaches that aspire to do everything the right way. Beilein, in fact, was voted the sport’s cleanest coach in a CBS poll of 100 coaches last year. The manner in which they run their programs decreases the likelihood of scandal because of one important tenant: They prioritize recruiting players who want the full collegiate experience.
They aren’t infatuated with chasing the best talent. They want the right talent. And they excel in developing players.
That’s why Michigan forward Moritz Wagner, a frail German kid when he entered the program three years ago, dominated the opening minutes Monday and finished with 16 points and seven rebounds. That’s why DiVincenzo, who was a redshirt working on the scout team in practice when Villanova won the title in 2016, became the Final Four’s most outstanding player. And Mikal Bridges, another former redshirt, scored 19 points.
“I think both of us are looking for guys that want to be in college,” Wright said. “And we both love having guys that are pros, too, but we want guys that want to be part of a program.”
Wright and Beilein aren’t self-righteous about their methods, however. They don’t coach at Duke, Kansas or Kentucky. There are recruiting limitations at Villanova and Michigan, even though they have developed into consistent elite-level programs. Duke and Kentucky are really the only programs that have been able to keep winning despite the yearly roster upheaval caused by signing one-and-done stars. Wright admits he’d like a few more five-star players in his program, but not at the risk of ruining what he has established. Beilein craves certainty and continuity.
“We’re trying to get a program that can just sustain itself,” said Beilein, who has now been the national runner-up twice in his last six seasons at Michigan. “And it’s very hard to sustain when you have the kids go pro who should have gone pro, but you didn’t plan on that when they were freshmen because nobody else thought they were going to go pro, and all of a sudden, they’re good enough to go pro.”
Said Wright: “Well, the reason we stick to it is we can’t get the one-and-done guys. We’re trying. We really are . . . . We recruit guys that just want to be in college. We want them to enjoy the college experience and then we hope that after one year of enjoying the college experience they have a really difficult decision to make that the NBA wants you but you really enjoy college. Rather than come to college saying I want to get out as soon as I can.”
Two years ago, Villanova rode its approach and its delightful perimeter-dominant style of play and won the 2016 title over North Carolina on Kris Jenkins’s stunning buzzer-beater. But this time, it wasn’t close. Villanova won all six of its tournament games by double figures. In the Final Four, the Wildcats blew out Kansas and Michigan. There’s no doubt that, for the time being, this is the best program in college basketball.
“How close we are just carries us when we’re on the court,” DiVincenzo said.
Near the end of the game, DiVincenzo spotted former Villanova star Josh Hart in the crowd and pointed to his old teammate. Hart grinned and pointed.
“Another one!” DiVincenzo yelled, spreading his arms out wide.
With Villanova running things, maybe this lost sport has a chance.
For more by Jerry Brewer, visit washingtonpost.com/brewer.
Posted by jtf at 9:03 AM