In London, Homicides Spike, and Politicians Do a U-Turn on Stop-and-Search 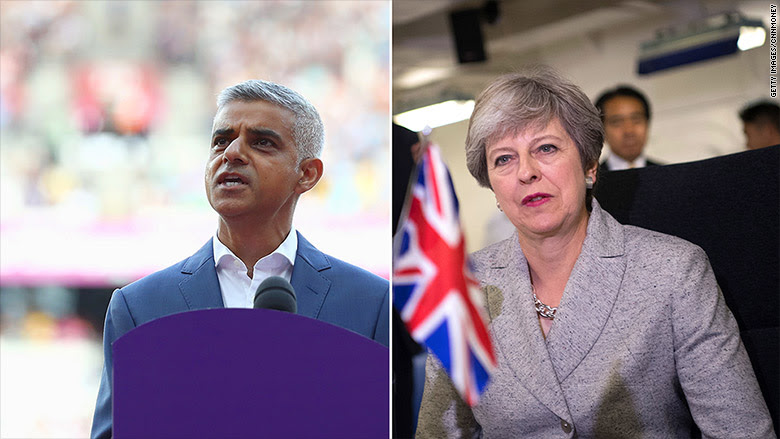 Sadiq Khan and Theresa May

During the past week, Londoners have woken to the fact that for the first time in living memory the homicide rate in their capital city has overtaken that of New York. There were 15 homicides in London in February, compared with 14 in New York. In March, there were 22 in London, 21 in New York. In recent weeks in London there has been at least one gang-related stabbing almost every day: often fatal, sometimes not. At least 35 deaths since the start of this year have been gang-related. Doctors talk of the emergency wards in parts of London in the evenings resembling a warzone. Just one of the oddities is that most Londoners remain untouched by this. As Harry Mount wrote at The Spectator last month, it is perfectly possible for a killing to be going on near a smart north-London dinner party.

Nevertheless, given that, among Brits, New York still has a reputation for violence, the comparison has struck a nerve. Apart from focusing the national mind, it has also fired up one of the most subterranean and troubling calculations any political class has to make. How many lives are you willing to sacrifice in pursuit of a political position?

In recent years the subject of stop-and-search has been an exceptionally emotive one in the U.K., as it is in America. Because it was deemed to target young black men disproportionately, police and politicians alike found stop-and-search to be a useful tool — not for targeting those people who were thought most likely to be carrying weapons but for parading their own political virtues by objecting to the practice.

When she was home secretary and looking — as any cabinet minister would — for a clear route to the top job, Theresa May used stop-and-search in exactly such a way. She berated the police for using it too often, and misapplying it, and came very close to reinforcing the charge most likely to give the police a nervous breakdown. For beneath May’s 2014 attack on police tactics was the implication that the British police still had some way to go to prove they were not (to use the words of Sir William Macpherson’s 1999 report into the racist murder of the black teenager Stephen Lawrence) still guilty of “institutional racism.” Since then politicians from across the political divide, including the mayor of London, Sadiq Khan, have repeatedly attempted to make political capital from suggesting that the British police are in some way still “on notice” with respect to the racism accusation. And exhibit A in the case for the prosecution is their alleged fondness for stop-and-search.
We have seen in the recent past where these sorts of in political positioning around the police can lead. In 2009 the police were criticized for what was claimed to be excessively heavy policing during a violent anti-capitalism protest in the center of London. One man — who was not in fact involved in those protests — was hit by an officer and died at the scene. Police heavy-handedness became a standard critique. Two years later rioting broke out after a 29-year-old black criminal was shot by the police in London. The riots swiftly spread across the city and then the country, fueled by the fact that the police seemed everywhere to be holding back. Lives were lost and millions of pounds of damage were caused by this decision. But why would the police not have been inclined to hold back in such a situation? Of course since the 2011 riots, the view has been that the police were not heavy enough with their policing in 2011. And so on and on it goes.
Now stop-and-search is going through a similar revolve. Since the New York/London homicide stats emerged, politicians are now suggesting that the police should indeed be able to stop and search people whom they suspect of carrying knives or other illegal weapons (such as acid to throw in people’s faces — which is another variant of violence that has now become a part of city life).
This weekend Theresa May began the process of carrying out a necessary U-turn on her own criticism of stop-and-search. Amazingly enough, a change of heart has even come upon Mayor Khan. The mayor has been almost completely absent from the scene in recent weeks, even flying to the U.S. to lecture Silicon Valley about “hate speech” while people were stabbing each other every day in the city he is meant to govern. Now even he is calling for an increase in stop-and-search to bring the current homicide rate down.

Such about-turns will be a passing embarrassment for politicians like May and Khan. But they will be a cynicism-enforcing moment for the public. The most strident opposition to stop-and-search was always based not on what was best for the communities affected by violence but on what was the best for politicians wishing to position themselves to look opposed to racism. The best critique of the policy was always that when it was misapplied, too frequently and without explanation, it could increase a feeling of alienation and unfairness among some communities. But that criticism, even when it was correctly made, once again sank in too fast and too deep with the police. And dozens of deaths later we are faced with the reminder that the immediate short term will always matter more than the potential long one. And that political positions can shift with the wind. Or blood. If it comes regularly enough. For at least the first quarter.