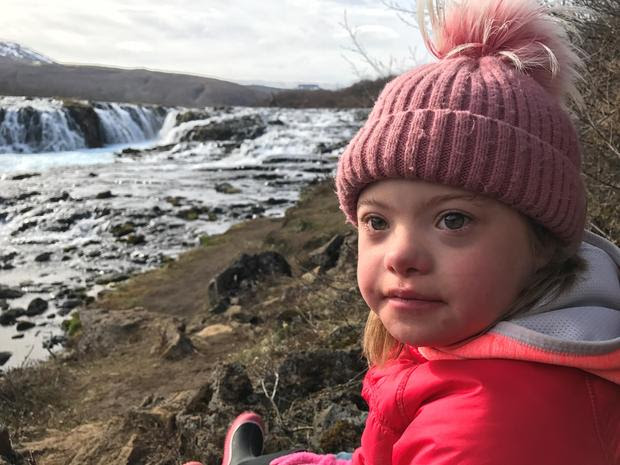 Agusta, now age 8, a citizen of Iceland (CBS News)
Iceland must be pleased that it is close to success in its program of genocide, but before congratulating that nation on its final solution to the Down syndrome problem, perhaps it might answer a question: What is this problem? To help understand why some people might ask this question, meet two children. One is Agusta, age 8, a citizen of Iceland. The other is Lucas, age 1, an American citizen in Dalton, Ga., who recently was selected to be 2018 “Spokesbaby” for the Gerber baby food company. They are two examples of the problem.
Now, before Iceland becomes snippy about the description of what it is doing, let us all try to think calmly about genocide, without getting judgmental about it. It is simply the deliberate, systematic attempt to erase a category of people. So, what one thinks about a genocide depends on what one thinks about the category involved. In Iceland’s case, the category is people with Down syndrome.
This is a congenital condition resulting from a chromosomal abnormality. It involves varying degrees of mental retardation (although probably not larger variances than exist between the mental capabilities of many people who are chromosomally normal — say, Isaac Newton and some people you know). It also involves some physical abnormalities (including low muscle tone, small stature, flatness of the back of the head, an upward slant to the eyes) and some increased health risks (of heart defects, childhood leukemia and Alzheimer’s disease). Average life expectancy is now around 60 years, up from around 25 years four decades ago, when many Down syndrome people were institutionalized or otherwise isolated, denied education and other stimulation, and generally not treated as people.
Highly (almost but not perfectly) accurate prenatal screening tests can reveal Down syndrome in utero. The expectant couple can then decide to extinguish the fetus and try again for a normal child who might be less trouble, at least until he or she is an adolescent with hormonal turbulence and a driver’s license.

Lucas Warren with parents Cortney and Jason (Splash/Reuters)
In Iceland, upward of 85 percent of pregnant women opt for the prenatal testing, which has produced a Down syndrome elimination rate approaching 100 percent. Agusta was one of only three Down syndrome babies born there in 2009. Iceland could have moved one-third of the way to its goal if only Agusta had been detected and eliminated. Agusta’s mother is glad the screening failed in her case.
An Iceland geneticist says “we have basically eradicated” Down syndrome people, but regrets what he considers “heavy-handed genetic counseling” that is influencing “decisions that are not medical, in a way.” One Icelandic counselor “counsels” mothers as follows: “This is your life. You have the right to choose how your life will look like.” She says, “We don’t look at abortion as a murder. We look at it as a thing that we ended.” Which makes Agusta and Lucas “things” that were not “ended.”
Because Iceland’s population is only about 340,000, the problem (again, see the photos of problem Agusta and problem Lucas) is more manageable there than in, say, the United Kingdom. It has approximately 40,000 Down syndrome citizens, many of whom were conceived before the development of effective search-and-destroy technologies. About 750 British Down syndrome babies are born each year, but 90 percent of women who learn that their child will have — actually, that their child does have — Down syndrome have an abortion. In Denmark the elimination rate is 98 percent.
America, where 19 percent of all pregnancies are aborted, is playing catch-up in the Down syndrome elimination sweepstakes (elimination rate of 67 percent, 1995-2011). So is France (77 percent), which seems determined to do better. In 2016, a French court ruled that it would be “inappropriate” for French television to run a 2½-minute video (“Dear Future Mom”) released for World Down Syndrome Day, which seeks to assure women carrying Down syndrome babies that their babies can lead happy lives, a conclusion resoundingly confirmed in a 2011 study “Self-perceptions from people with Down syndrome.” The court said the video is “likely to disturb the conscience of women” who aborted Down syndrome children.
So, photos of Agusta and Lucas are probably “inappropriate.” It speaks volumes about today’s moral confusions that this — the disruption of an unethical complacency — is the real “Down syndrome problem.”
Read more from George F. Will’s archive or follow him on Facebook.
Read more on this topic:
Ruth Marcus: I would’ve aborted a fetus with Down syndome. Women need that right.
Marc A. Thiessen: When will we stop killing humans with Down syndrome?
Rachel E. Adams: My son with Down syndrome is not a mascot for abortion restrictions
Posted by jtf at 5:24 AM

Email ThisBlogThis!Share to TwitterShare to FacebookShare to Pinterest
Labels: Abortion and Life Issues, George Will