When a nation seals the fate of its enemies 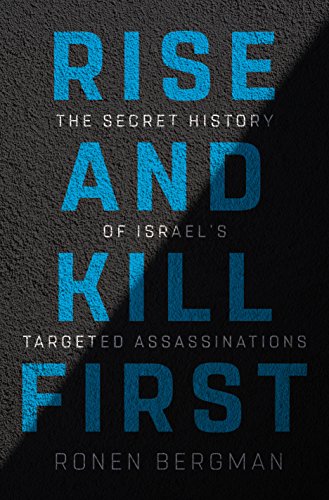 RISE AND KILL FIRST: THE SECRET HISTORY OF ISRAEL‘S TARGETED ASSASSINATIONS
By Ronen Bergman
Random House, $35, 784 pages
Targeted assassination is a type of premeditated killing of those who pose an imminent threat. It is usually carried out by a covert intelligence or military unit often when the enemy’s capture is made impossible by his protected presence in hostile territory.
Due to the protracted nature of the conventional military and terrorist threats by Israel’s adversaries such as Iran, Syria, Hamas and Hezbollah, the Jewish state has developed one of the world’s top covert special operations capabilities to target selected adversaries for assassination.
As Ronen Bergman writes in “Rise and Kill First,” Israeli covert agencies have conducted targeted assassinations against the country’s Arab adversaries throughout its pre- and post-statehood periods and the total number of these spectacular killings is staggering.
Before the outbreak of the second Palestinian intifada (uprising) against Israel in September 2000, Israel had conducted some 500 targeted killing operations, killing at least 1,000 people. These included the systematic revenge assassinations of the Palestinian Black September terrorists who had murdered Israeli athletes at the Summer 1972 Munich Olympics, and the daring raid in Beirut, Lebanon that killed Ali Hassan Salameh, the terror group’s operations officer in January 1979 — almost seven years after the massacre of the Israeli athletes had occurred.
Other covert operations include the assassination in April 1988 by an Israeli special forces’ team of Abu Jihad, a top Palestinian leader, at his exile home in Tunis, Tunisia, and the use of a remote cellphone miniature bomb, in the Gaza Strip, to kill Yahya Ayyash, known as the “Engineer,” in his hideout in the Gaza Strip in January 1996. Ayyash was responsible for masterminding numerous Hamas suicide bombing attacks against Israel.
Following the second Palestinian intifada, when the Palestinian suicide bombers targeted Israeli citizens on a daily basis, causing the deaths of some 887 Israeli civilians and 250 military personnel (these figures do not appear in the book), Mr. Bergman reveals that Israel carried out some 1,000 targeting operations, of which 168 succeeded in killing their targeted terrorists, with an additional 800 operations conducted against them from 2005 (when the intifada ended) until late 2017.
These killings were directed against leading Hamas operatives, such as the firing by a helicopter gunship of a rocket bomb against Hamas’ leader, Ahmed Yassin in March 2004, at his hideout in the Gaza Strip, as well as revenge targeting of selected senior Hezbollah operatives, such as the notorious terrorist mastermind Imad Mughniyeh, who was killed by a remotely controlled car bomb explosion in Syria in February 2008. This was followed, on Jan. 19, 2010 by a fatal poisoning by an Israeli hit team of Mamoud al-Mabhouh, a Hamas financier, at his hotel room in Dubai.
In an example of “bazaar diplomacy,” and despite international outrage, there were no repercussions against Israel, supposedly due to a “behind the scenes” understanding that let Israel off the hook.
Other operations included a series of killings in Iran by Israeli covert operatives (and, as the author speculates, by Israeli allies in the region) against numerous scientists who were involved in developing Iran’s nuclear weapons program, which was directed against Israel, between the years 2010 and 2012.
About targeted assassinations, the author asks, “First, is it effective? Can the elimination of an individual, or a number of individuals, make the world a safer place? Second, is it morally and legally justified?”
Mr. Bergman writes that Israel’s targeted killing campaign significantly weakened the PLO’s terrorist commanders and greatly diminished the rate of Palestinian suicide attacks. With PLO leader Yasser Arafat repeatedly targeted for assassination, and his ability to continuously evade his assassins, the author reveals that, in the late 1970s the Israeli Mossad intelligence service tried to delegitimize Arafat with evidence of his engaging in homosexual relations with his bodyguards, but they did not go forward with it.
Mr. Bergman also writes when Arafat “succumbed to a mysterious internal disease” that killed him in early November 2004, “traces of polonium, a radioactive material used in assassinations,” were found on his “clothes and remains,” and “the timing of Arafat’s death was quite peculiar, coming so soon after the assassination of Yassin” in March of that year.
Although he may know whether Arafat’s death was a product of an Israeli assassination operation, he writes, “If I knew the answer to the question of what killed Yasser Arafat, I wouldn’t be able to write it here in this book, or even be able to write that I know the answer.”
As for moral justification, Mr. Bergman writes, the target “must be an individual directly linked to terrorism” and that “there should be no killings when there was a ‘reasonable arrest alternative’”
He observes that Israel’s campaign of targeted assassinations “provided Israel’s leaders sooner or later with operational responses to every focused problem they were asked to solve. But the intelligence community’s very success fostered the illusion among most of the nation’s leaders that covert operations could be a strategic and not just a tactical tool — that they could be used in place of real diplomacy to end the geographic, ethnic, religious, and national disputes in which Israel is mired.”
Further, he writes, this “tactical method of combating terror” has been “elevated and sanctified at the expense of the true vision, statesmanship and genuine desire to reach a political solution that is necessary for peace to be attained.”
Highly dramatic and thoroughly informed, “Rise and Kill First” explains Israel’s successes and dilemmas as it confronts the continuous, implacable hostility of its Middle Eastern adversaries.


• Joshua Sinai is a senior analyst at Kiernan Group Holdings in Alexandria, Va.

How Israel's Leaders use Targeted Killings to try to 'Stop History' -

https://www.timesofisrael.com/how-israels-leaders-use-targeted-killings-to-try-to-stop-history/
Posted by jtf at 6:59 AM