After the West Side Highway Jihad: What Does ‘Extreme Vetting’ Mean?

Our immigration system needs to take Islam into account, to distinguish pro-American Muslims from sharia supremacists. 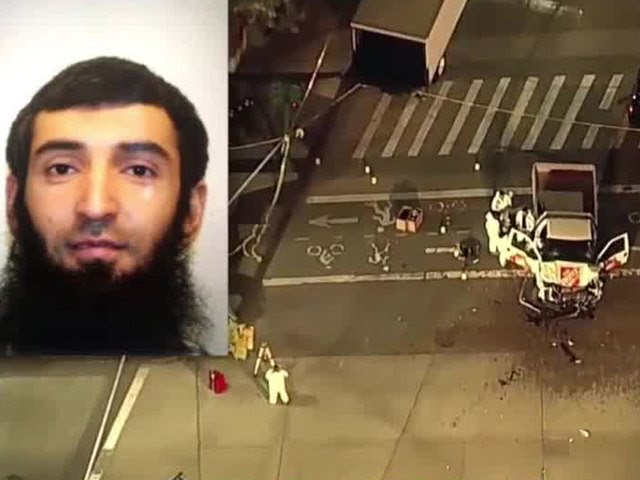 To the surprise of exactly no one, it turns out that the Uzbek-born jihadist who murdered eight people on the streets of New York City on Tuesday was invited into the United States under the cockamamie “Diversity Visa Program.” (Paul Mirengoff has the details at Powerline.) Sayfullo Habibullaevic Saipov, a sharia supremacist and Islamic State supporter, came to our shores seven years ago, as a young Muslim man of 21.

I wrote about the Diversity Visa Program in The Grand Jihad, my book about the sharia supremacist strategy for infiltrating and “destroying the West” (to quote the Muslim Brotherhood). As detailed there:

Since the Bush 41 administration, the State Department has also been running a “Diversity Visa” program, the very purpose of which is to promote immigration from countries whose citizens resist coming to the United States — i.e., to encourage our cultural disintegration. It is a hare-brained scheme, concocted by hard-Left Senator Ted Kennedy, because the Irish (yes, the Irish!) were purportedly underrepresented in our gorgeous mosaic. Mark Krikorian, the director of the Center for Immigration Studies, describes the consequences: Fully one-third of the annual diversity-visa lottery winners now come from Islamic countries, which means that the program has become a disproportionately important immigration vehicle for Muslims.

Thanks to [this and other federal immigration] policies, another million or so Muslims reside in the United States (i.e., in addition to the roughly million-and-a-half American Muslims). It is impossible to say for sure what the precise number is because our crack Homeland Security Department keeps track only of immigrant entries into the U.S. — not whether these aliens leave, much less whether, once here, they adhere to their stated purpose for coming. It bears repeating, however, that these aliens are not American Muslims. They are legal and illegal immigrants whose fealty is to some other country, or, more realistically, to the ummah [(i.e., the notional worldwide Islamic community)]. This is a matter of no small importance when we are well aware of the supremacist Islamist design: Immigration not to pursue the American dream but to become the American nightmare — a jihad to transform the United States.

It has been nearly a decade since I wrote that passage. In the interim, it has become only clearer that the jihadists are only the tip of the spear. We are dealing with an ideological enemy whose aim — they are quite explicit about this — is to supplant Western culture and law with sharia’s repressive societal system and legal code. This is the objective of all jihadism. These violent attacks cannot happen, at least not with regularity, unless the militants have a support system: ideological enclaves that foster incitement, recruitment, training, fund-raising, and moral support.

As night follows day, we learn that, in the years leading up to yesterday’s attack, Saipov gravitated to the Omar Mosque in Paterson, N.J. Sharia supremacism’s inroads have made the community the object of counterterrorism investigations for over a dozen years.

Because of the centrality of immigration issues to the Trump campaign and presidency, we have been debating visa and refugee policy. I’ve thus tried to point out, any number of times: While the potential that trained jihadists could enter the country by masquerading as good-faith immigrants is serious, it is not the primary danger. The overarching threat is self-created: an immigration policy that promotes assimilation-resistant enclaves in which sharia supremacism embeds. Though we worry about the jihadist of today, we must be at least as concerned about the ten-, twelve-, 15-year-old kid who settles into a sharia-supremacist enclave and, like Saipov, is a jihadist seven years from now.

Ever quick with a tweet, President Trump reacted last night by asserting (among other things): “I have just ordered Homeland Security to step up our already Extreme Vetting Program. Being politically correct is fine, but not for this.”

But he is being politically correct. After all, what is it that “Extreme Vetting” is vetting for? No one wants to say. Why? Because, as we’ve been contending here for months, the ill-considered, ineffectual “travel bans” have pushed the Trump administration into a posture that makes screening for sharia supremacism much more difficult.

I revisited this problem after the Supreme Court allowed these travel restrictions to go into effect last summer:

As I have been arguing, the executive orders in question have been a disaster because they provide no meaningful improvement in security, yet the litigation over them has done serious damage to the overarching goal of an improved vetting system. In order to defend the president from the claims of anti-Muslim bias, the administration has argued that the travel-ban orders have nothing to do with Islam. Thus, the administration has been lured into supporting, at least tacitly, the proposition that restrictions on alien admissions would be constitutionally invalid if they took Islam into account.Yet, without taking Islam into account — i.e., without sorting anti-American sharia supremacists from pro-American Muslims supportive of the Constitution — there is no way to restrict the entry of Muslims who would increase the threat of jihadism and undermine our society. That is, if we cannot vet for sharia supremacism, there is little point in what Trump calls “extreme vetting.”

Have you watched President Trump’s recent canoodling with the Saudis? Have you noticed the Trump State Department’s intervention on behalf of terror-supporting Qatar and reluctance to crack down on the Muslim Brotherhood? I have, and it bolsters my long-held suspicion that, when push comes to shove, the Trump administration does not really grasp what “radical Islam” is and would have no stomach for a battle over factoring sharia-supremacist ideology into account when vetting aliens who seek to enter our country.

Now, let’s go back to the president’s tweeting after yesterday’s atrocity in Manhattan:

We must not allow ISIS to return, or enter, our country after defeating them in the Middle East and elsewhere. Enough!
— Donald J. Trump (@realDonaldTrump) October 31, 2017

Right . . . except it’s never going to be “Enough!” until the Swamp is willing to acknowledge what the challenge is. It is not ISIS. Jihadist organizations are a symptom. The pathology is sharia supremacism. If you don’t vet for it, you’re going to keep having attacks long after ISIS, which started as al-Qaeda, transforms into whatever the next flavor-of-the-month jihad group is.
Sharia supremacism is not a religion. It is a totalitarian political ideology with a religious veneer. This is the critical distinction — ideology, not religion. If we cannot vet for sharia supremacism because the political establishment decides it is not a political ideology but an Islamic religion entitled to all First Amendment protections, then we cannot protect the country. Period.