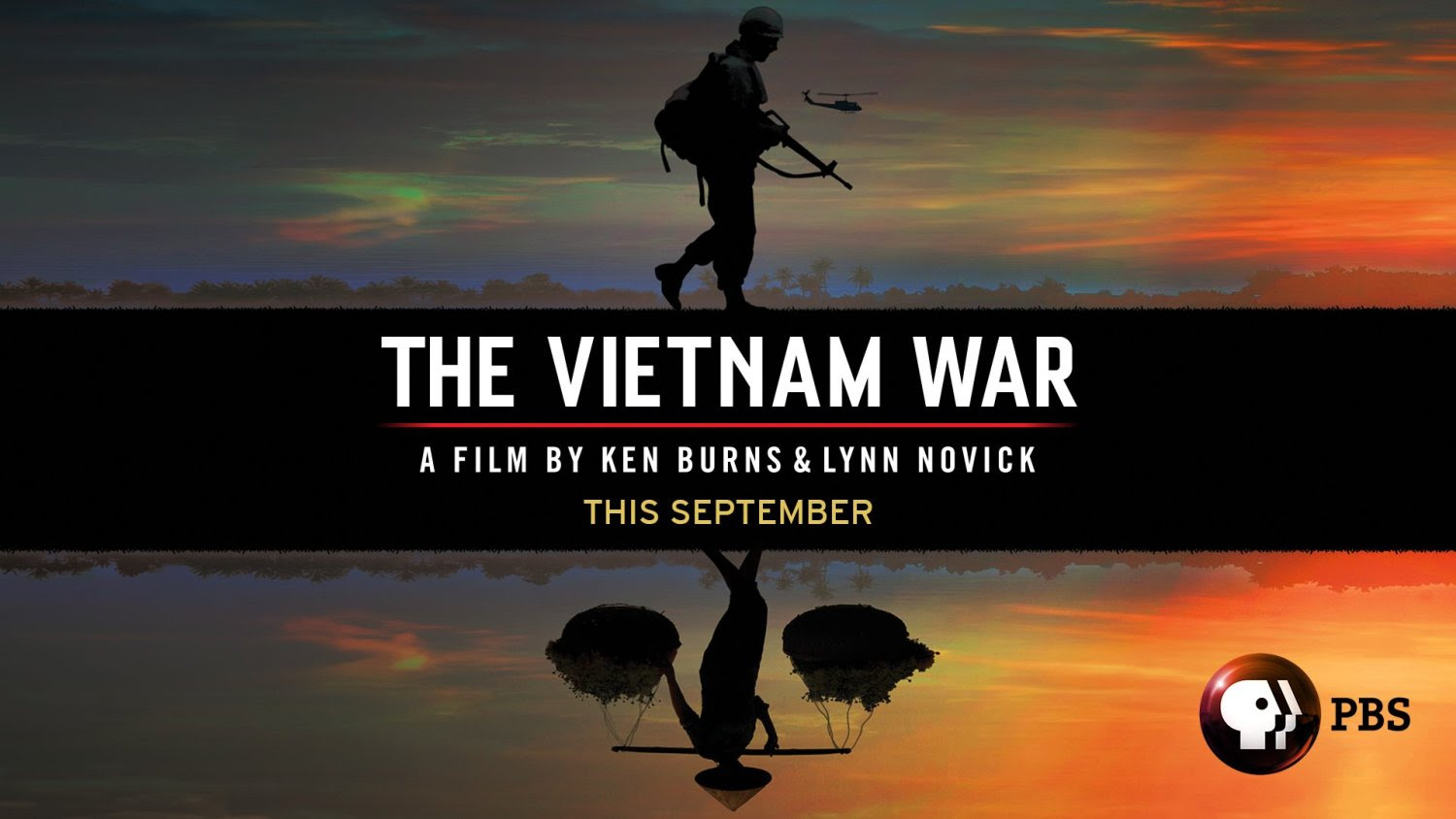 The Ken Burns-Lynn Novick documentary on Vietnam, which covers 18 hours of air time, has received major media attention and generally high praise. In scores of interviews before its premiere on PBS last week, Burns predicted that both anti-Vietnam war and pro-Vietnam war sides would be surprised, and that both would find things to like and dislike about the episodes.

From his own standpoint, Burns said he and Novick wanted to try to bring the country together and end our old divisions over Vietnam, and to give everyone new angles to consider which both sides ignored at the time. In a piece in The Atlantic, Burns and Novick end with this:

The war may have robbed America of its innocence, but it also reminded us that the duty of citizens in a democracy is to be skeptical -- not to worship our leaders … but to question their decisions, challenge their policies, and hold them accountable for their failures.

The film has been hailed by the mainstream media. Time, for example, gave it a rave review in which Karl Vick writes the following:

To its immense credit,  The Vietnam War occupies itself entirely with striving to capture what happened in Vietnam. The principals, including diplomats, spies, prisoners of war, draftees and Viet Cong, speak with often aching candor, since for many the definition of patriotism shifted from supporting the government to challenging it. No single view dominates, but a kind of consensus appears to take shape, formed out of shared experience and mutual respect.

So far, the only critical review I have seen in a major publication is from revisionist historian of the war Mark Moyer. He writes in The Wall Street Journal that rather than making a film that would be definitive and bring the country together, Burns and Novick “chose instead to make it another partisan harangue that is certain to keep Americans divided.” In a forthcoming issue of The Weekly Standard, Stephen Morris, a historian of Vietnam, will publish a substantial review that will offer an in-depth critique of the series.

Burns and Novick’s claim that no single view dominates their series has not won it plaudits from most left-wing commentators. They largely argue that the film projects an American innocence, and portrays those who fought as idealists who tried to serve their country, while neglecting to show “American imperialism” as the war’s cause -- and failing to conclude that those who opposed the war had the correct arguments at the time.

However, there is something in the documentary the Left does like: its depiction of Ho Chi Minh, the Stalinist leader of North Vietnam who presided over the country during the war, as almost a saint.

[The documentary] corrects a few of the mistakes that have been common to popular accounts, for instance acknowledging that Ho Chi Minh was a full-blooded communist, who pulled the strings of the ostensibly independent Viet Cong.

In an interview conducted by leftist historian Jon Wiener with Todd Gitlin, a leading SDS activist in the '60s and now a radical professor at Columbia University, Gitlin gives Wiener the following description of Ho that he got from the film:

If there’s a hero in the early history they present, it’s Ho Chi Minh -- who, however flawed, is depicted as resolute, honorable, and devoted to his people and their independence.

Indeed. Gitlin might have added that if there is a villain, it was the first leader of South Vietnam, Ngo Dinh Diem. Contrary to their picture of Ho, Diem is painted as corrupt, faithful only to his family and cronies, and not a real nationalist who wanted an independent but non-Communist Vietnam. 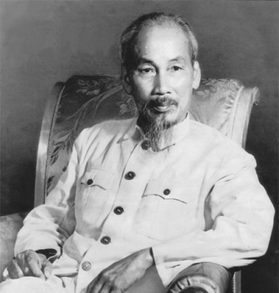 Viewers get the impression that while Ho was indeed a communist and a nationalist, he was also a Jeffersonian and so might not have been all that bad. The truth, of course, is that Ho Chi Minh was no Washington or Jefferson. He was a committed Marxist-Leninist trained to be a Soviet agent in the 1920s at Moscow’s Lenin School.

During WWII, Vietnam -- a French colony -- was taken over by Japan. Towards the end of the war, with Japan in retreat, a power vacuum developed. Ho Chi Minh, leading his Communist guerrilla force, worked to seize power before the French could regain their former control and restore colonial rule.

Ho needed allies, and understood that FDR was both anti-French and anti-colonial. Ho’s aim -- according to one of his biographers, William Duiker -- was to “induce the United States to support the legitimacy of his government, rather than a return of the French.” On Sept. 21, 1945, Ho won his war, and proclaimed Vietnamese independence. Speaking to the crowds at a major square, Ho “began by quoting the words of Thomas Jefferson, ‘All men are created equal, endowed by their Creator with certain inalienable rights, among them life, liberty, and the pursuit of happiness.’”

Ho believed that he had to have a “tactical, flexible attitude towards the national bourgeoisie,” whose help he needed to build a communist Vietnam. But this did not extend to his internal rivals like the Trotskyists, with whom he wrote that “there can be no compromise, no concession.”

To consolidate the Communist party’s power, Ho instructed his top aide General Giap, as narrator Peter Coyote tells us, to conduct a:

They also show us one South Vietnamese nationalist saying the Viet Minh weren’t fighting for Vietnam, but were fighting for “international Communism.”

However, this comes as a throwaway one-time comment, quickly forgotten as the documentary continues to portray the communist troops as the only true nationalists. Nor does the film explain the killing of the 50,000 members of the then-powerful Trotskyist Communist party in Vietnam, which revealed that even on the revolutionary political Left, Ho showed he was beholden to Stalin.

The truth is that Ho was “a disciplined Communist” who had “proved time and time again his profound loyalty to Communism.” These words were written by ex-Communist German revolutionary Ruth Fischer, who defected to America and became an anti-Communist activist and a member of a U.S. intelligence agency “the Pond,” which existed between 1942 and 1955. Writing in 1954 in Foreign Affairs, Fischer revealed that she knew Ho Chi Minh when they were both in Moscow in the 1920s. Summing up Ho’s role, Fischer wrote:

Ho is of course a veteran Communist; he will of course head a party state striving for the maximum industrialization and finally for collectivization of agriculture. One can even describe Ho as the model of the disciplined Communist; he has proved time and again his profound loyalty to Communism. However, his subordination to Moscow's authority stemmed as much from a sober evaluation of his political alternatives.

Despite this, the myth that Ho was the George Washington of Vietnam and a Jeffersonian persists.

Seven years ago, Barack Obama had a meeting in the White House with Vietnam’s president Truong Tan Sang. With the war long in the past, his goal was to continue to help reconcile the U.S. and Vietnam and to cooperate on trade, disaster relief, and other matters.  After the meeting, the White House news release quoted Obama as saying:

[W]e discussed the fact that Ho Chi Minh was actually inspired by the U.S. Declaration of Independence and Constitution, and the words of Thomas Jefferson.

So what will viewers take away from the documentary’s depiction of Ho? Let us turn to the words of PBS anchor Judy Woodruff on News Hour, as she speaks with Ken Burns:

JUDY WOODRUFF: Ho Chi Minh, did you come away from this experience understanding better who he was and what he represented?

I mean, it’s striking. He was, what, quoting Jefferson, Thomas Jefferson, at one point.

KEN BURNS: During his declaration of Vietnamese independence

KEN BURNS: … quoting Thomas Jefferson. And there’s an OSS officer standing next to them.

So, you begin to say, as Lynn is talking about, if you understand the overlay of the Cold War and how we’re going to not have World War III … so what we’re going to do is, we’re going to pick our little battles, and fight it through places like South Vietnam/North Vietnam struggle, that you can misread what a local leader is all about.

But we do know what Ho Chi Minh was all about. He postured as a Jefferson-inspired lover of independence, simply following America’s model of revolution. It was a charade that some Americans, including more than a few OSS officers stationed in Vietnam, fell for.

Despite their claims, some of which you will hear in the documentary, Ho Chi Minh had not the slightest interest in the Declaration of Independence. His only concern was to use it as a tool to help neutralize the United States and to keep them out of his way in attaining his goal of a unified Communist nation.
Posted by jtf at 9:31 AM