Time for a Full Investigation... of the FBI 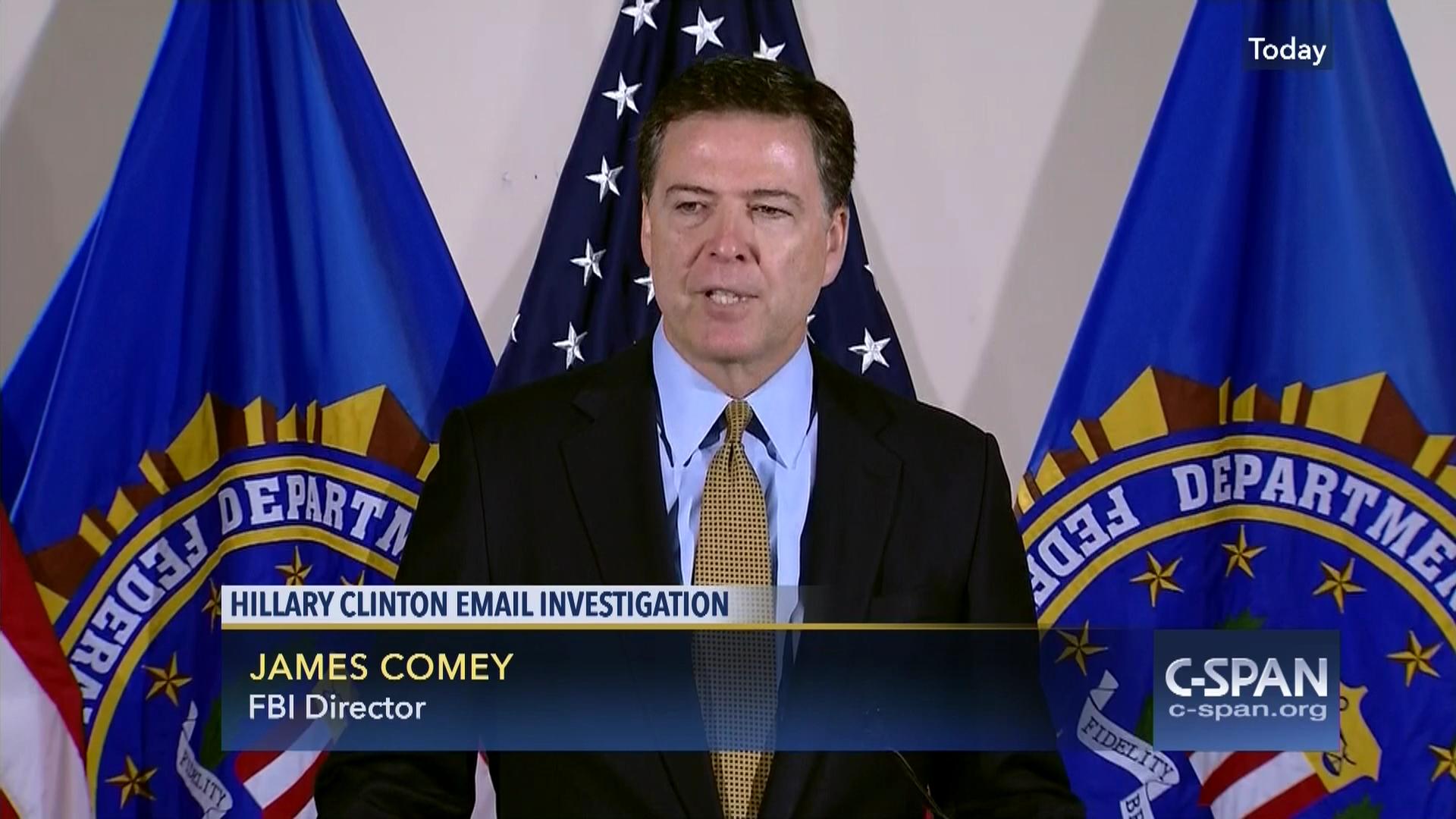 FBI Director James Comey spoke to reporters about presumptive Democratic presidential nominee Hillary Clinton’s use of private email servers while serving as secretary of state. He said that although the investigation found extremely “careless” behavior by Secretary Clinton and her staff in their handling of sensitive information, the FBI concluded that no charges were appropriate and that the agency believed no reasonable prosecutor would bring such a case. (July 5, 2016/C-Span)


What happens to a country whose most important police force — and its key investigators — is no longer telling the truth to the citizens of that nation? Nothing good, I'm sure most would agree.  There's almost no point in going through all the analogies to despotic regimes. Writers from George Orwell to Arthur Koestler have already done it for us.

But those analogies come immediately to mind following two revelations regarding our Federal Bureau of Investigation that surfaced this week. In one instance, the FBI refused to turn over documents regarding the Hillary Clinton emails because of -- wait for it -- "lack of public interest."

The head of the FBI Records Management Division wrote Ty Clevenger, a New York Attorney who filed the FOIA request in March 2016, to inform him that his request was being denied in late August.

“You have not sufficiently demonstrated that the public’s interest in disclosure outweighs personal privacy interests of the subject,” the letter, obtained by Fox News, reads. “Therefore, records regarding your subject are withheld pursuant to FOIA exemptions.”

It's hard to imagine what was going on in the mind of Records Management Division head David M. Hardy when he wrote -- or was forced to write by some unknown superior -- such a risible lie, but things have only gotten worse from there.  Now we learn that then FBI director James Comey may never have planned to find Clinton guilty in the first place.

While the transcripts of those interviews are heavily redacted, they indicate that Comey started working on an announcement clearing Clinton in April or May of last year, before the FBI interviewed 17 witnesses in the case, including Clinton and some of her top aides.

Defenders of Comey insist this early draft exonerating Clinton is standard FBI practice, but, not surprisingly, none of them mention that a similar draft deeming Clinton culpable has not surfaced.  One doubts it exists.

To millions of Americans, Hillary Clinton was as guilty as O.J. Simpson.  You would have to be an imbecile not to think she didn't know she was doing something illegal secreting her professional emails as secretary of State on a private server hidden in a bathroom. And yet James Comey's ultimate decision on Clinton depended on her putative ignorance after literally decades of government service.

No wonder he vacillated so many times in his statements and actions.  Only someone completely without conscience wouldn't have.  And  Comey should have a guilty conscience because it is now becoming increasingly clear he was looking for way to exonerate Clinton virtually no matter what. The famous Bill-Loretta tarmac meeting was an unnecessary embarrassment, as was Lynch instructing Comey to call the investigation a "matter."  This was ultimately, as the Italian film goes, "The Investigation of a Citizen above Suspicion."  That is why she was never interviewed under oath and so many of her subalterns were let off free or allowed to destroy records and negotiate the most outlandish requests that neutered the inquiry. That is why we have never seen the tens of thousands of erased and supposedly missing emails.

Meanwhile, the ongoing Mueller-Russia investigation is tied intimately to the FBI through the close relationship of former director Robert Mueller to his successor Comey with a steady stream of Clintonistas joining Mueller's team.  How much more tarnished could it get?

Well, a lot more -- because it is the reputation of the Federal Bureau of Investigation itself that is even more dangerously tarnished.  The conventional wisdom is that there are plenty of good, patriotic civil servants in the FBI -- and that is undoubtedly true -- but not since the days of J. Edgar Hoover has the organization's leadership been so suspect, their opaque decision-making process so fraught with defensive self-preservation  and political bias. Sometimes, it seems the "G-men" spend far more time dodging FOIA requests --  redacting almost everything in sight, lest it be "misunderstood" by we in the great unwashed -- than in stopping crime. That may not be so, but the reasons for the perception are undeniable.

Something must be done and quickly.  The latest revelations about Comey make the recusal of Mueller more urgent, but the overall situation is yet more severe.  The FBI itself needs some form of investigation and reorganization. A true reform.  Otherwise a huge percentage of the country will continue to distrust it and that distrust, pending the results of the closely tied Mueller-Russia inquiry, will only continue to grow.  That is untenable in a democratic republic.

Failing that, we might as well rename the FBI as the GDS -- the  Guardians of the Deep State.

Roger L. Simon is an award-winning novelist, Academy Award-nominated screenwriter and co-founder of PJ Media.  His latest book is I Know Best:  How Moral Narcissism Is Destroying Our Republic, If  It Hasn't Already. He procrastinates on Twitter @rogerlsimon.
Posted by jtf at 6:37 AM