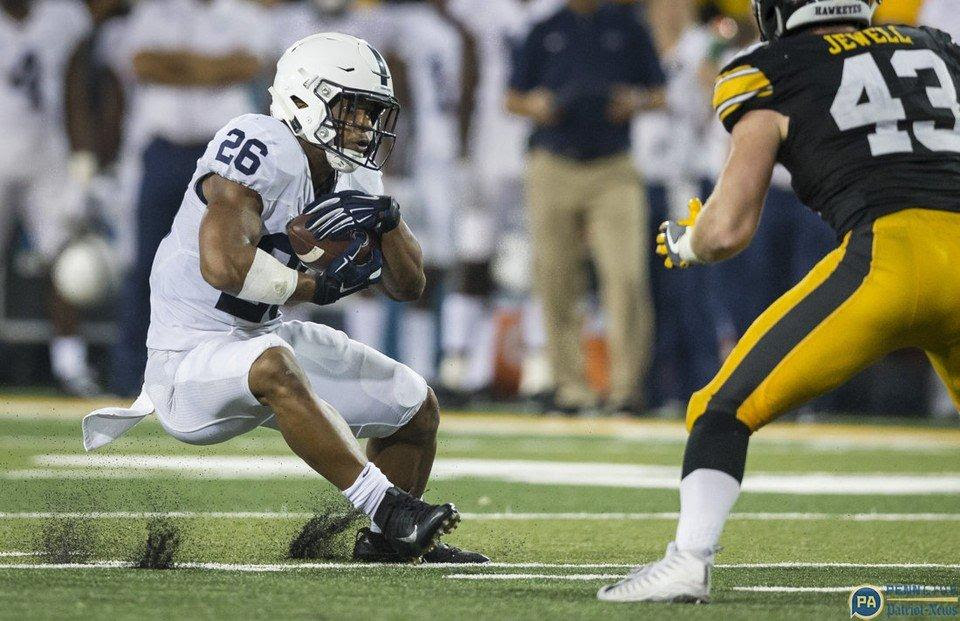 Saquon Barkley didn’t score the game-ending touchdown, the one that kept Penn State’s undefeated season alive. But, boy oh boy, he did nearly everything else.
Barkley has wowed before. He’s boggled the mind, left jaws on the floor and dropped defenders to their knees. Literally. That’s not new.
But Barkley has never put together a performance quite like Saturday night. In Penn State’s tight 21-19 win against Iowa at Kinnick Stadium, Barkley broke down the Hawkeyes with 358 all-purpose yards — a new single-game program record.
In a showcase that only furthers his Heisman Trophy campaign, Barkley racked up 211 rushing yards on 28 carries (7.54 yards per carry), 94 receiving yards on 12 catches and 53 kickoff return yards. The total broke Curt Warner’s record of 341 yards, which has stood on the books for 36 years.
"Saquon’s a dog. That’s simply what it is,” Penn State safety Marcus Allen said, nodding his head. “Saquon’s a dog, and dogs do dog things.”
“I can’t take credit for the performance I had today. It’s an 11-man sport,” Barkley said, when asked where this showing ranked for him personally. “You can’t do it by yourself.”
But humility aside, Barkley put the offense on his back.
The elusive back had 10 offensive plays of 10 yards or more (six rushing, four receiving). He scored Penn State’s first touchdown of the night, an eight-yard run in which he dove and reached the ball out over the pylon, putting Penn State up 15-7 late in the third quarter. Barkley accounted for 12 of Penn State’s first downs, including a critical one in the game’s final drive.
And, of course, the dizzying junior dazzled with yet another highlight reel moment: a 44-yard run that stupefied one of the best defensive players in college football. Before he punched in that eight-yard score, Barkley jump-started Penn State’s first touchdown drive by looping around the Iowa defense for an 11-yard gain. Then he stopped along the Penn State sideline still in-bounds and allowed Iowa linebacker Josey Jewell to dive right past him. From there, he put the key in the ignition and raced for 33 more yards deep into Hawkeye territory.
“I’m going to have to watch that 17 more times to know what he did to get out of it,” Penn State quarterback Trace McSorley said of the 44-yard gain, in which Barkley was pinned by four Iowa defenders, including Jewell, on the sideline. “But he somehow got out of it. During that play, I was like, ‘Oh my God.’”
When asked about Barkley’s performance as a whole, McSorley said it was just “unreal.”
“I don’t know what his numbers were,” the quarterback added.
“358,” a reporter said.
“All-purpose?”
“Yeah.”
McSorley smiled. “That’s absurd.”
Indeed it was, and Barkley’s display wasn’t just impressive on the stat sheet. He showed up when his teammates needed him most.
On Penn State’s final series — a 12-play, 80-yard two-minute drill for the win — the Nittany Lions went to Barkley twice. The back had 22 yards on two receptions. But more importantly, Barkley picked up the blitz on Penn State’s last play. Jewell bull-rushed through an opening in the Nittany Lions’ offensive line, and Barkley stepped to him. That gave McSorley just enough time to find Juwan Johnson streaking in the back of the end zone.
After the play, Barkley celebrated with his teammates — and, in the media room, lauded their efforts.
Football isn’t an individual game, and no, he didn’t punch in the decisive touchdown. But Barkley did his best to will the Nittany Lions to a win they desperately needed. With the pressure closing in at a raucous Kinnick Stadium, Barkley was the one guy Penn State could look to each and every time and know that something positive was bound to happen.
He was consistent. He was explosive. And he was, by far, the best player on the field.
“I cannot imagine that there’s a better player in all of college football,” Penn State coach James Franklin said.
He may have a point.
John McGonigal: 814-231-4630, @jmcgonigal9
Read more here: http://www.centredaily.com/sports/college/penn-state-university/psu-football/article175120281.html#storylink=cpy