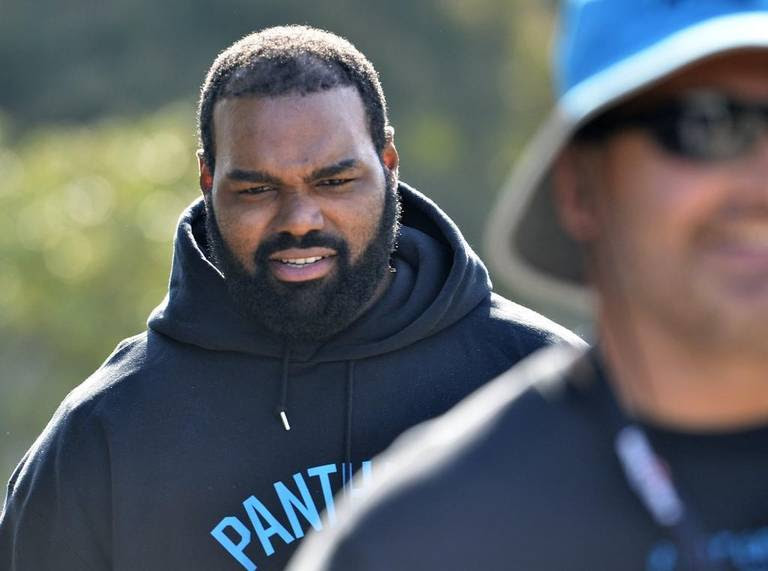 The story of Michael Oher has become so large, so legendary, that in some ways we’ve forgotten there’s a real human being underneath it all.

In many ways, what’s happened to Oher represents what happens to many NFL players. They bash their heads in (by choice). They play with brain injuries that would sideline normal human beings for months (by choice).

We cheer them, we love them, we hate them. In most cases, we never get to truly know them, or understand, or care, what is happening to their bodies. This is especially true with offensive linemen like Oher. They are nothing but helmets and shoulder pads and numbers.
They make millions, we tell ourselves. They make choices, we say. That is all true. When some of them end up so brain damaged they can’t function in their 40s, or have suicidal thoughts in their 30s, we shake our heads—damn, that’s a shame—and move on. When does camp start?
Oher became one of the more famous players of his generation. He was an All-American at the University of Mississippi. His life was chronicled in the 2006 best-selling book The Blind Side: Evolution of a Game by Michael Lewis. That book was adapted into the Academy Award-winning movie The Blind Side.
This week, when the New York Times reported 110 of 111 former NFL players examined posthumously for CTE had the disease, we barely blinked. Think about that for a second. We’ve become so used to players battering their brains so badly that they have a deadly disease that may have ended their lives prematurely, and no one gives a damn.
There is perhaps no player who represents this phenomenon more than Oher. Hollywood, and the media, fetishized him, and we were all too busy slobbering over his story to realize that Oher the human being was suffering.
Oher took a picture of his 10 pill bottles—medicine he said was "all for the brain" (he later deleted the post). Oher had been in the NFL’s concussion protocol for nine months. That's longer than the NFL season itself.
In May, Oher was charged with assaulting an Uber driver. And earlier in July, he took shots at people in the Panthers' building who were happy that former general manager Dave Gettleman was fired.
When he was cut by the Panthers this month, Sandra Bullock wasn’t there speaking to the media. There was no red carpet. No Academy Awards. Just a designation: failed physical.
After his release, Oher tweeted: "The Brain is a scary thing. You have to be careful with it."
When speaking to a former Panthers player this week, he was succinct in describing Oher’s situation: "It’s one of the scariest I’ve ever seen. I’ve never known any player to be in concussion protocol that long."
The player's fear was simple: No one he knew had ever suffered from concussive effects so long, and so thoroughly, they stayed in the concussion protocol for almost a year.
The player said most Panthers who knew Oher were privately hoping he never played football again. It's possible his livelihood is dead at just 31 years old.
I can also say, with certainty, some players now are genuinely scared. I'm hearing a level of concern I haven't heard before. I've heard from some who say the latest story and data regarding CTE rocked them more than any other. It was the near 100 percent number that triggered it. Some players tell me now they don't see it any other way: If you play in the NFL, you will get CTE. It's that simple to some of them.
On Thursday, Baltimore offensive lineman John Urschel, who turned 26 in June, retired from the NFL. Urschel is pursuing his doctorate in mathematics at MIT, and his retirement could have nothing to do with fear of CTE. Maybe he retired because he has bigger things to do, like expand the theory of relativity.
But the suddenness of his retirement is indeed interesting. He participated in all of the team's offseason camps, and his quitting the sport occurred just two days after the release of the latest CTE data. It's also part of a trend we're seeing in the NFL with younger players retiring.
Video recently emerged of former player Brian Price running through a glass door. Price's wife believes her husband is suffering from CTE.
How does Oher figure in all of this? He went from the subject of a Hollywood movie starring one of its most bankable stars, to a solid NFL player, to having his brains so scrambled he spent nine months in NFL medical limbo, to being released. His NFL life, and the life of so many other players, comes down to a variation of an old saying: The NFL giveth and the NFL taketh away.
Oher exemplifies a deal we all make with the NFL devil. Fans make that deal because they tend to ignore the damage done to players. The media makes it because we still, at times, glorify the violence of the sport, and too many of us in the media play the part of sycophants for the league, refusing to acknowledge the CTE issue. The players make that deal, earning millions off their unique skill set, as they should, while knowing it could potentially take years off their life.
Leonard Marshall, who played for three NFL teams from 1983-1994 and won two Super Bowls, said in a Thursday interview with The DA Show on CBS Sports Radio that before he began taking the drug Elixinol, he dealt with depression and suicidal thoughts.
"I'm always worried," Marshall said when asked about CTE and its potential long-term effects, "because it's always going to be in the back of my mind that I'm one of those guys."
The aforementioned alleged assault on the Uber driver may have nothing to do with CTE. Yet that is part of this horrific disease. It can disguise itself as so many things.
What happened to Michael Oher?
The same thing that happened to so many others.
He played in the NFL.
Mike Freeman covers the NFL for Bleacher Report. Follow him on Twitter @mikefreemanNFL.
Posted by jtf at 6:33 AM