He went toe-to-toe with Muhammad Ali — and inspired ‘Rocky’ 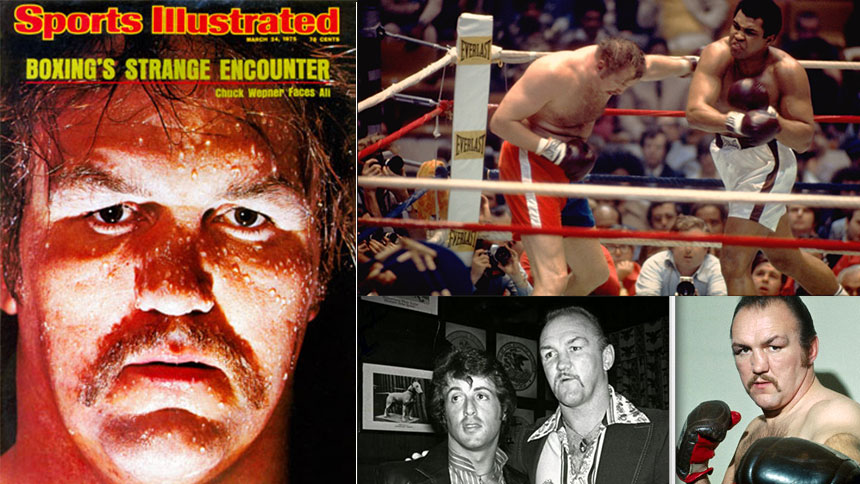 Chuck Wepner has fought some of the biggest names in professional boxing: Ali. Liston. Foreman.
But taking on those powerhouses was nothing compared to the time he fought a bear. Actually, the two times.
The first was at Asbury Park’s Convention Hall in 1976. “This 1,250-pound bear charged me and pinned me,” Wepner said. “I was supposed to raise my hand if I wanted to stop the fight, but the bear held down my arms. And his [fur] was like Brillo. By the end of the fight, my body was beet red.”
Their rematch went no better: “That bear charged me again, stood on his hind legs and threw me out of the ring,” said Wepner, now 78. “I was [also] asked to fight a kangaroo in South Africa, but I told them to forget about it. Kangaroos hit hard!”
Wepner’s checkered life story — including allegedly inspiring Sylvester Stallone to write “Rocky” — is chronicled in the new movie “Chuck,” starring Liev Schreiber and opening in theaters Friday. It tells the unvarnished tale of a struggling New Jersey fighter who earned the evocative but deprecating nickname “the Bayonne Bleeder” during a fight in which his blood splattered on a reporter sitting ringside.
Indeed, while Wepner won 35 of his 51 pro bouts, he also had some viciously bloody losses — including a 10th-round TKO by Sonny Liston that left him needing more than 70 stitches in his face.
But in 1975, promoter Don King offered Wepner $100,000 — the boxer’s highest-ever payday — to take on Muhammad Ali.
“Ali said he needed an easy fight after [George] Foreman [at 1974’s “Rumble in the Jungle”] and figured he would cut me up,” said Wepner. “But I had a shot to win a title against the most famous man in the world.”
Wepner went the distance, but the match was brutal. The Post called it “a fight between a house painter and an artist.”
Still, “Ali was exhausted from punching Chuck so many times,” Schreiber told The Post. “That’s a testament to Chuck’s spirit and tenacity [to] keep moving forward.”
As for Wepner’s take on it all, he said, “I thought I was ahead during the fight.”
Despite losing by taking a knee 19 seconds before the final bell, Wepner showed the world that he had heart. Ali himself later said, “There’s not another human being that can go 15 rounds like that.” 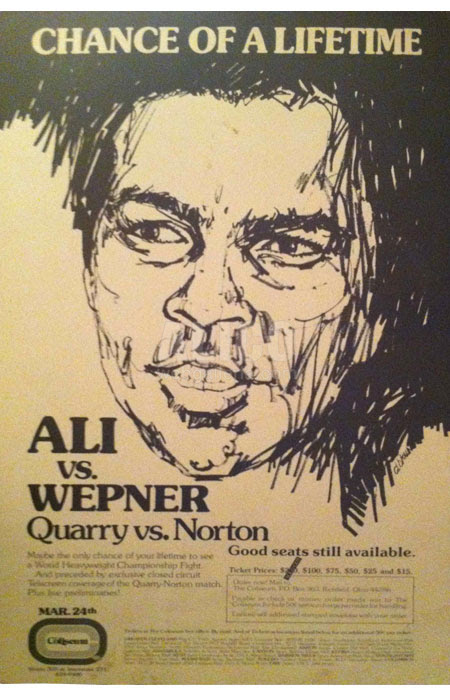 Sylvester Stallone took notice and allegedly based his Rocky Balboa character on “the Bleeder.” Released in 1976, “Rocky” was a low-budget film with an essentially unknown writer-star (Stallone), but it went on to become the highest-grossing film of the year and win three Oscars, including Best Picture.
“I saw ‘Rocky’ in a Manhattan movie theater, and the crowd went nuts for Rocky,” said Wepner. “And, to be honest, so did I.”
Wepner, meanwhile, was in a weird place. Besides his match with the bear, that summer he had fought wrestler Andre the Giant in front of 42,000 people at Shea Stadium. Manager Al Braverman has said that they took this undignified gig strictly for the money. Wepner was in the midst of a hard-partying binge, including a cocaine habit, that would eviscerate much of his $100K windfall.
Word had gotten out that Wepner was supposedly the inspiration for “Rocky.” He lied to friends, saying that he had been paid for his life rights. “I was upset about [not being compensated] and had a lot of pride,” he said.
Stallone tried to make good on the slight by offering him a role in the sequel. But Wepner handicapped himself: “I had been partying for two days before the audition — drinking, doing coke, not sleeping. Sly saw me and said, ‘Champ, you look a little tired.’ I read but did not do well. I failed to make it.”
Things hit rock bottom in 1985 when, according to Wepner, he “did a friend a favor and brought him an ounce of coke” — although then-Middlesex County prosecutor Alan Rockoff described Wepner as a “mid level” drug dealer in possession of four ounces. The boxer pleaded guilty and was sentenced to 10 years but served three in Newark, NJ’s Northern State Prison.
Although he maintained that he was set up, Wepner also admitted that “going to jail might have been a good thing. Since getting out, I’ve been a good boy.”
These days, Wepner is happily married to his wife of 22 years, Linda, makes a living as a wholesale liquor salesman and drives around with a personalized license plate that reads “Champ.” He’s even come to think of the “Rocky” franchise, which exacerbated his downfall by bloating his ego, as a positive: “Stallone created a legendary character and it rubbed off on me.”
Nevertheless, in 2003, Wepner sued the actor for hijacking his life. Three years later, they settled for an undisclosed sum. “Everyone thinks that Sylvester Stallone and I don’t like one another, but it’s not true,” insisted Wepner. Stallone — who’s favorably portrayed in “Chuck” by actor Morgan Spector — even helped the producers finagle a deal for some potentially pricey fight scenes.
“If we shot it in America, we would have had to pay $2 million,” Wepner said. “Stallone said, ‘I’ll hook you up in Bulgaria, where I shoot my “Rambo” movies.’ ”
Still, Wepner would not mind one more favor from the Hollywood star, who brought the Rocky character back to the big screen for “Creed” in 2015. “If Sylvester Stallone wants me for a movie, he knows where to find me,” he said. “I will happily be available."
Posted by jtf at 5:18 AM