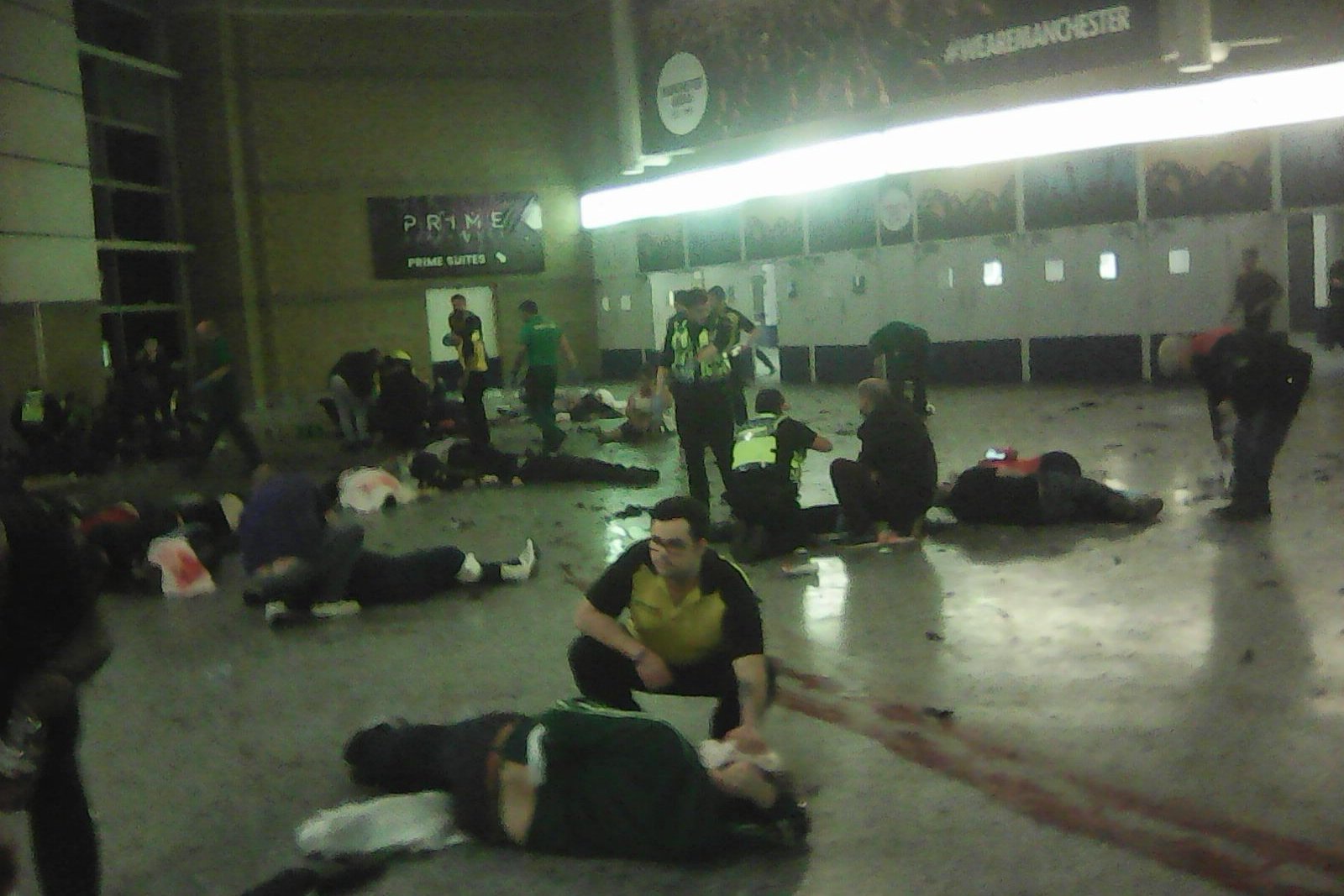 Injured concertgoers and police officers inside the arena after the explosion. (Credit Press Association, via Associated Press)

The pop star Ariana Grande has canceled the remaining dates of her "Dangerous Woman" tour following the murder of 22 fans (at the time of writing) and the injury of dozens more at her concert in Manchester. The Manchester Royal Infirmary reports that half the victims brought to the hospital overnight are children. The killer was a suicide bomber. Theresa May says the police believe they know his identity. The usual, predictable details will follow. [UPDATE: He's Salman Abedi, the Manchester-born son of Libyan refugees and another "known wolf".]

As The Independent's headline has it:

There's only one way Britain should respond to attacks such as Manchester. That is by carrying on exactly as before.

That's not actually the "only" way Britain could respond, but it seems the way to bet, judging from the responses of the political class. "Carry on" is a very British expression. One thinks of the famous scene in one of the most famous of the Carry On comedies, Carry On Up The Khyber, surely the most insightful film ever made about Afghanistan: as you'll recall, the revolting Khasi of Khalabar grows ever more enraged at the British Governor's refusal to let the shelling and destruction of Government House disrupt his dinner party. Even when the Khasi has the main course replaced with the head of a decapitated fakir, Her Majesty's viceroy declines to let his eye be caught by these vulgar attention-seeking jihadists. The film received unenthusiastic reviews from London critics in 1968. One would not have predicted that half-a-century later it would be official British policy on the home front.

Easier said than done, alas. A couple of hours ago, as I write, the Arndale shopping center in Manchester was evacuated, somewhat chaotically, with hundreds of customers stampeding for the exits lest they be the cause of The Independent's next carry-on editorial. The Arndale was the scene of the last big terror attack - in 1996, when the IRA totaled it. Two hundred people were injured, but nobody died, and you don't have to be a terror apologist like Jeremy Corbyn to find the bad old days of Irish republicanism almost quaint by comparison. A few weeks ago the BBC reported that "approximately 850 people" from the United Kingdom have gone to Syria and Iraq to fight for Isis and the like. That's more volunteers than the IRA were able to recruit in thirty years of the "Troubles", when MI5 estimated that they never had more than a hundred active terrorists out in the field. This time maybe it's the exotic appeal of foreign travel, as opposed to a month holed up in a barn in Newry.

Carrying on in Germany, Angela Merkel pronounced the attack "incomprehensible". But she can't be that uncomprehending, can she? Our declared enemies are perfectly straightforward in their stated goals, and their actions are consistent with their words. They select their targets with some care. For a while, it was Europe's Jews, at a Brussels museum and a Toulouse school and a Copenhagen synagogue and a Paris kosher supermarket. But Continentals are, except for political photo-ops on Holocaust Memorial Day, relatively heartless about dead Jews, and wrote off such incidents as something to do with "Israeli settlements" and "occupation" and of no broader significance.

So they moved on to slaughter 49 gays in a nightclub in Orlando - the biggest mound of gay corpses ever piled up in American history and the worst terror attack on American soil since 9/11. But all the usual noisy LGBTQWERTY activists fell suddenly silent, as if they'd all gone back in the closet and curled up in the fetal position. And those Democrats who felt obliged to weigh in thought it was something to do with the need for gun control...

So they targeted provocative expressions of the infidel's abominable false religion, decapitating a French priest at Mass and mowing down pedestrians at a Berlin Christmas market. But post-Christian Europe takes Christianity less seriously than its enemies do, and so that too merited little more than a shrug and a pledge to carry on.

So they selected symbols of nationhood, like France's Bastille Day, Canada's Cenotaph, and the Mother of Parliaments in London. But taking seriously assaults on your own nation's symbols would require you to take your nation seriously, and most western citizens are disinclined to do so. As the great universal talismanic anthem of the age has it, "Imagine there's no countries/It's easy if you try..."

So the new Caliphate's believers figured out that what their enemy really likes is consumerism and pop music. Hence the attacks on the Champs-Élysées and the flagship Åhléns department store in Stockholm, and the bloodbath at the Eagles of Death Metal concert in Paris and now at Ariana Grande's "Dangerous Woman" tour.

In the decade since the Canadian Islamic Congress launched their "flagrant Islamophobia' lawsuits over my book, various comrades such as Ezra Levant and Douglas Murray have noted, correctly, that a principled commitment to free speech has always been a minority concern - and an even smaller minority with respect to free speech about Islam. As the most learned imam John Kerry put it with respect to the Charlie Hebdo massacre, there was "a sort of particularised focus and perhaps even a legitimacy – not a legitimacy, but a rationale..." Those cartoonists, they were all wearing short skirts and asking for it.

Conversely, most other western citizens believe that, to invert Trotsky, if you're not interested in Islam, Islam won't be interested in you. Ariana Grande was eight at the time of 9/11, and most of her fans even younger. They have passed their entire sentient lives in the age of Islamic terror, yet somehow assume it's something compartmentalized and sealed off from them. "Dangerous Woman" is meant to be an attitude, nothing more - an edgy pose in a pop culture that lost any edge long ago; a great T-shirt, like the ones last night scavenged from the merchandising stands and used to bandage the wounded. It must come as a shock to realize there are those who take your ersatz provocations as the real thing, and are genuinely provoked by them.

"Carrying on exactly as before", as The Independent advises, will not be possible. A few months ago, I was in Toulouse, where Jewish life has vanished from public visibility and is conducted only behind the prison-like walls of a fortress schoolhouse and a centralized synagogue that requires 24/7 protection by French soldiers; I went to Amsterdam, which is markedly less gay than it used to be; I walked through Molenbeek after dark, where unaccompanied women dare not go. You can carry on, you can stagger on, but life is not exactly as it was before. Inch by inch, it's smaller and more constrained.

And so it will prove for cafe life, and shopping malls, and pop concerts. Maybe Ariana Grande will be back in the UK - or maybe she will decide that discretion is the better part of a Dangerous Woman's valor. But there will be fewer young girls in the audience - because no mum or dad wants to live for the rest of their lives with the great gaping hole in your heart opening up for dozens of English parents this grim morning. And one day the jihad will get lucky and the bomb will take with it one of these filthy infidel "shameless" pop whores cavorting on stage in her underwear. You can carry on exactly as before, but in a decade or two, just as there are fewer gay bars in Amsterdam and no more Jewish shops on the Chaussée de Gand, there will be less music in the air in western cities. Even the buskers, like the one in Manchester's Piccadilly Gardens today serenading a shattered city with "All You Need Is Love", will have moved on, having learned that it's a bit more complicated than that.

I am currently reading Douglas Murray's fine book, The Strange Death of Europe, which lays out, unsparingly, the central illusion of the last half-century - that you could demographically transform the composition of hitherto more or less homogeneous nation states on a scale no stable society has ever attempted, and that there would be no consequences except a more vibrant range of local restaurants. Mrs May declared this morning on the steps of Downing Street that she had held a top-level security meeting, or what they call in Britain a "COBRA", which sounds like something scary enough to do battle with SPECTRE; in that sense, it's a very butch acronym for a bit of bureaucratic furniture labeling (Cabinet Office Briefing Room A). But I'll bet the mood around the table was one of fatalism and resignation, outside a few micro-adjustments to the budget of counter-terrorism agencies and the number of CCTV cameras and the amount of security checks at "sensitive" "high-value" targets like department stores, and theatres, and restaurants and football grounds and pubs and chip shops and...

But the arithmetic is not difficult: Poland and Hungary and Slovakia do not have Islamic terrorism because they have very little Islam. France and Germany and Belgium admit more and more Islam, and thus more and more terrorism. Yet the subject of immigration has been all but entirely absent from the current UK election campaign. Thirty years ago, in the interests of stopping IRA terrorism, the British state was not above preventing the internal movement within its borders of unconvicted, uncharged, unarrested Republican sympathizers seeking to take a ferry from Belfast to Liverpool. Today it declares it can do nothing to prevent the movement of large numbers of the Muslim world from thousands of miles away to the heart of the United Kingdom. It's just a fact of life - like being blown up when you go to a pop concert.

All of us have gotten things wrong since 9/11. But few of us have gotten things as disastrously wrong as May and Merkel and Hollande and an entire generation of European political leaders who insist that remorseless incremental Islamization is both unstoppable and manageable. It is neither - and, for the sake of the dead of last night's carnage and for those of the next one, it is necessary to face that honestly. Theresa May's statement in Downing Street is said by my old friends at The Spectatorto be "defiant", but what she is defying is not terrorism but reality. So too for all the exhausted accessories of defiance chic: candles, teddy bears, hashtags, the pitiful passive rote gestures that acknowledge atrocity without addressing it - like the Eloi in H G Wells' Time Machine, too evolved to resist the Morlocks.

As I asked around Europe all last year: What's the happy ending here? In a decade it will be worse, and in two decades worse still, and then in three decades people will barely recall how it used to be, when all that warmth and vibrancy of urban life that Owen Jones hymns in today's Guardian is but a memory, and the music has died away, and Manchester is as dull and listless as today's Alexandria. If Mrs May or Frau Merkel has a happier ending, I'd be interested to hear it. If not, it is necessary not to carry on, but to change, and soon - before it's too late.

~Mark will have more to say about yesterday's events on the radio this afternoon, Tuesday, with Evan Solomon at 580 CFRA Ottawa live at 5.30pm Eastern.
Posted by jtf at 4:18 PM