There is no RIP for Fidel Castro in Miami. Just good riddance 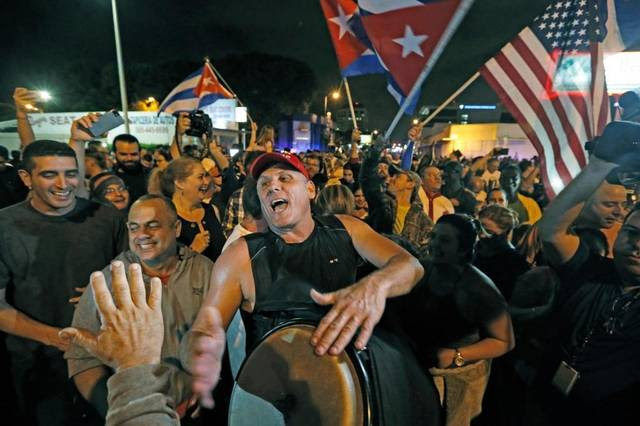 Miamians celebrate the death of Cuba's Fidel Castro in front of Versailles Restaurant in Little Havana.

The tyrant is dead.
I have to say it to believe it.
Al fin.
Finally, the guerrilla leader who rose to power on a promise of social justice but instead separated families, executed and persecuted opponents, and unleashed unprecedented misery on the Cuban people no longer exists on this earth.
I’ve been waiting all my life for this moment.
Finally, the traitor whose Communist rule uprooted me from all I knew and loved and brought me to these shores with a broken heart is gone.
The tyrant is dead.
I have to repeat it to believe it.
I was born the same year the Cuban Revolution triumphed. I was 10 years old when I left Cuba on a Freedom Flight in 1969 with parents who paid dearly for my freedom and future. I’m a grandmother now. That’s how long Fidel Castro has maintained his grip on Cuba, first as self-anointed despot, then after he ceded the throne to his brother, as symbol.
This is an iconic moment. Generations of Cubans, Cuban-Americans and our children in Miami, capital of exiles, are celebrating his physical erasure with an ardor reserved for World Series and NBA titles. Behold this hashtag on social media: #myabuelitosarehavingapartyinheaven.
Don’t judge us harshly. Give us this moment. Our exile is his doing. There’s no RIP from us for the embodiment of evil in our collective and personal histories.
"Satan, he’s all yours," said in Spanish a sign held by a man on Calle Ocho in the dawn hours of Saturday after brother Raúl announced Fidel Castro’s death on Cuban television.
During the six decades of the Castro brothers totalitarian rule, more than two million Cubans fled their beloved island, taking solace in the words of Cuba’s most famous exile, poet and independence hero José Martí: "sin patria, pero sin amo," without a homeland, but without a master.
Countless met their deaths in the attempt to cross the seas and now trekking through the jungles of some seven countries to reach the U.S. border. One of Castro’s most heinous crimes was the massacre of 41 men, women and children attempting to flee Cuba on a tugboat on July 13, 1994. Cuban authorities sprayed the vessel with water hoses, rammed and sank it. This is not something I read. I interviewed survivors at the Guantanamo Cuban refugee camps months later. The Cuban Coast Guard refused to rescue the drowning, they told me.
There were so many other crimes and human rights abuses, largely ignored or benignly viewed by a world that gave Castro the benefit of the doubt, and only slapped him on the wrist occasionally at some forums like the United Nations.
Fidel Castro, myth and legend to the international left, has died without being brought to justice for his crimes against his people — the passing of the torch and title of president to his brother in 2006 challenged only by brave dissidents who are beaten and detained daily. The Castros have installed their children and grandchildren in government roles, an indication they plan to sustain the family dynasty beyond Raúl’s promised retirement in 2018.
There’s joy, excitement — and hope — at the news of Fidel Castro’s death at 90. I’m skeptical. Castro didn’t govern alone. He had accomplices. They’re mourning him today, planning to bury his ashes near Martí’s resting place in Santiago de Cuba, an honor he doesn’t deserve.
Still, it won’t be the same without the patriarch. With his death, it feels as if an evil curse — the heaviest of weights — has been lifted on a nation whose children are scattered all over the world.
The bogeyman is gone.
At the break of morning, the streets of Havana were deserted. People were told to stay inside, refrain from playing music, close their doors.
Miami never went to sleep, some of the arteries that run through its Cuban heart closed so that people could express the accumulation of 58 years of loss and separation, of disillusionment and never-ending hope.
Cuba sí, Castro no more.
There will be no farewell comandante from us, only a good riddance.
Fabiola Santiago: fsantiago@miamiherald.com, @fabiolasantiago