Republicans fail to scream at the lunacy of drafting women 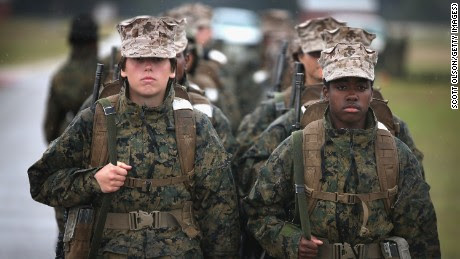 In the blink of an eye, we’ve gone from opening combat jobs to women to Republican presidential candidates endorsing registering women for a draft.
Hide your daughters — our deluded and cowardly political elites are a clear and present danger to common sense.
A proposal from the chief of staff of the Army and the commandment of the Marine Corps to require that women register with the Selective Service seemed at first like an effort to highlight the absurd end point of the rush to put women in combat, but top Republicans duly saluted and fell in line.
Asked about the proposal at the recent Republican debate, Marco Rubio said that “Selective Service should be opened up for both men and women in case a draft is ever instituted.” He makes it sound as though women would completely miss out should a large-scale conventional war break out and they not be compelled to fight in it through the coercive power of the state.
Chris Christie agreed. So did Jeb Bush, who gamely — and cluelessly — added that “we should not impose any kind of political agenda on the military.”
Of course, a political agenda — namely the insistence there is no meaningful difference between men and women, even when it comes to military combat — is the entire point.
The same people who tend to think that college girls need safe spaces to protect them from unwelcome speech profess to believe that their ranks are bristling with the likes of Lyudmila Pavlichenko, the legendary Soviet World War II sniper.
They are indulged in this illusion by men with ribbons on their chests who should know better. The US military doesn’t exist to satisfy the whims of the board of directors of the Ms. Foundation. Its job is to field a force that is most effective at winning the nation’s wars.
In an extensive study, the US Marine Corps concluded that mixed-gender units fail by that test, although no one is inclined to take note.
The Marine study compared all-male and mixed-gender units and concluded that women in mixed-gender units “were injured twice as often as men, less accurate with infantry weapons, and not as good at removing wounded troops from the battlefield.”
The physical capacity of the sexes is different, and top-end females tend to be only as capable of the lower-end males. The males in the Marine study averaged 178 pounds, with 20 percent body fat, whereas females were 142 pounds with 24 percent body fat.
The top 25 percent of females in anaerobic power overlapped with the bottom 25 percent of males; the top 10 percent of females in anaerobic capacity overlapped with the bottom 50 percent of males.
The physical disadvantage meant that women were more likely to be fatigued and suffer stress fractures. Women were six times more likely to be injured in entry-level training than males.
The rejoinder to such inconvenient facts is always that the Russians and the Israelis deployed or deploy women in combat. But this is much too simplistic.
Lyudmila the sniper was an exception. According to a study for the School of Advanced Military Studies at Fort Leavenworth, even under the extreme pressure of the Nazi invasion, women were only 8 percent of the Red Army, and largely served as medics or otherwise in medical care.
As for the Israelis, women initially fought with the Haganah guerrilla force prior to the creation of the Jewish state. But they were pulled back over time.
“Generally,” the Fort Leavenworth study notes, “because of their comparative lack of physical strength, commanders employed women in defensive operations whenever possible.”
Today, as The New York Times notes in a report on gender integration of the Israel Defense Forces, “it remains rare for women to kill or be killed.”
It is evidently too much to ask that reality intrude on the polite fictions of this country’s policy-makers.
comments.lowry@nationalreview.com
FILED UNDER 2016 PRESIDENTIAL ELECTION ,  COMBAT ,  MILITARY ,  MILITARY DRAFT ,  REPUBLICANS , WOMEN
Related:
EDITORIAL: Only a Barbaric Nation Drafts Its Mothers and Daughters into CombatRead more at: http://www.nationalreview.com/article/431007/women-selective-service-republican-candidates
EDITORIAL: The Obama Administration’s Disastrous Decision on Women in CombatRead more at: http://www.nationalreview.com/article/431007/women-selective-service-republican-candidates
Posted by jtf at 6:37 AM