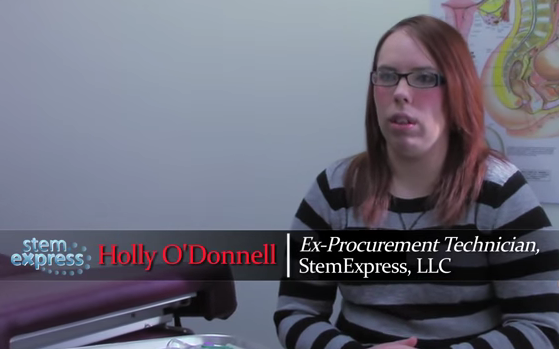 The seventh Planned Parenthood video is a bombshell.

It features former StemExpress technician Holly O’Donnell, who has appeared in several of the other videos released by the Center for Medical Progress, describing an average day at Planned Parenthood Mar Monte’s Alameda Clinic in San Jose, Calif.:

“I want you to see something kinda cool. This is kinda neat,” [her coworker says.] So I’m over here, and . . . the moment I see it, I’m just flabbergasted. This is the most gestated fetus and the closest thing to a baby I’ve seen. And she is, like, “Okay, I want to show you something.” So she has one of her instruments, and she just taps the heart, and it starts beating. And I’m sitting here, and I’m looking at this fetus, and its heart is beating, and I don’t know what to think.

It’s that same fetus, heart still aflutter, whose brain O’Donnell is then asked to harvest. “[The coworker] gave me the scissors and told me that I had to cut down the middle of the face,” she recalls. “I can’t even describe what that feels like.”

As my colleague David French notes, assuming O’Donnell’s account is accurate, Planned Parenthood unquestionably violated state and federal laws. And it would not be the first time. In a recorded conversation excerpted in the video, Dr. Ben Van Handel, executive director of Novogenix Laboratories, LLC, which partners with Planned Parenthood to procure fetal organs, admits: “There are times when after the procedure is done that the heart actually is still beating.”

Debate, if you like, the moral status of the in utero “product of conception.” Wonder, if you want to, about the precise point of “viability” or “quickening.” No such arguments apply here. This was allegedly a living baby, exposed on a counter and murdered. This was not a “conceptus” or a “specimen.” This was a person, vested with a constitutional right to life and guaranteed the full protection of the United States government.

This should be different.

But it won’t be. As of Wednesday afternoon, major media outlets remained utterly silent about the latest video. There is no mention of it on the online front pages of the New York Times, the Washington Post, the Los Angeles Times, or the Chicago Tribune; it is not on the homepages of CNN or the news arms of ABC, NBC, or CBS. These are the same august outlets from which you can currently learn about “the smells of summer” in New York City, a viral deleted scene from the sitcom Friends, or security camera footage of a Utah police officer dancing to the Silento song “Watch Me (Whip/Nae Nae)” at a 7-Eleven.

This is nothing new. According to a YouGov poll taken earlier this month, 68 percent of respondents reported having heard “nothing at all” about the Planned Parenthood videos. And as for government leaders, two weeks ago Josh Earnest confessed that, to his knowledge, no one in the White House had watched any of the videos, and that he was simply parroting Planned Parenthood’s talking points. It is sadly predictable that the White House has said, and will say, nothing of substance in response to the videos.

But, again, this time should be different. What O’Donnell says took place at the Alameda Clinic was not an abortion; by law, it was an execution. Government has a duty to investigate alleged crimes and to prosecute lawbreakers. A conscientious press has a duty to ferret out the facts of a story, and to hold wrongdoers accountable in the public eye. Their refusal to do so in this case is a national disgrace almost as shameful as the one they’re ignoring.

— Ian Tuttle is a William F. Buckley Fellow in Political Journalism at the National Review Institute.