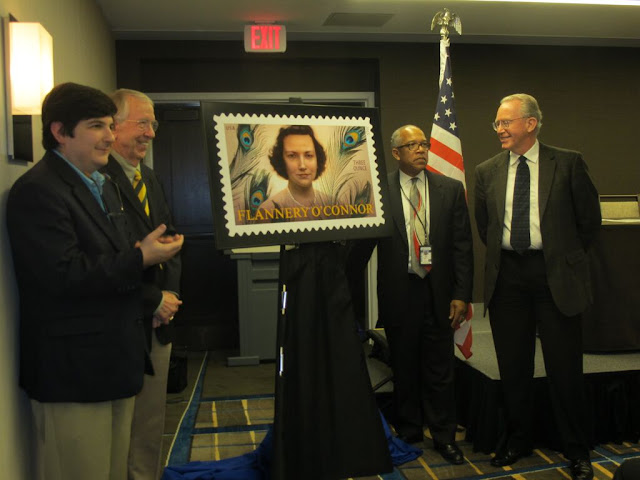 Famous authors are often invited to elite dinner parties in New York City, a setting in which the rich Georgia drawl of Flannery O'Connor stood out like a dish of cheese grits next to the caviar.

At one such event, O'Connor ended up talking to author Mary McCarthy, who opined that her childhood Catholicism had faded, but she still appreciated the Eucharist as a religious symbol. The reply of the fervently Catholic O'Connor became one of the most famous one-liners in a life packed with them.

"Well, if it's a symbol, to hell with it," replied O'Connor, as reported in a volume of her letters. "That was all the defense I was capable of but I realize now that this is all I will ever be able to say about it, outside of a story, except that it is the center of existence for me."

The fact that this literary legend now graces a U.S. postage stamp – more than 50 years after her death – is a testimony both to the greatness of O'Connor and to the fact that her radical, even shocking, vision of life has always been impossible to pigeonhole, said scholar Ralph C. Wood of Baylor University.

In particular, O'Connor refused to bow to man-made idols – including the U.S. government and the civil religion many attach to it, said Wood, speaking at a National Philatelic Exhibition rite in McLean, Va., marking the release of the author's commemorative stamp. She refused to make her faith private and polite.

"We honor Flannery O’Connor today because she resisted such idolatry," he said. "She set her loves in order by giving her first and final loyalty, not to the nation-state, but to the incarnate and living God. ... She became the most important Christian author this nation has yet produced ... by becoming a radically Catholic writer.

"This meant that she was critical of her country, therefore, because she loved it. She also loved and criticized her native South in much the same way. Precisely because she discerned the transcendent virtues of her region could she lament its temporal evils."

O'Connor also lanced the soft underbelly of church culture in her short stories. For Wood, the author's description of the smug Mrs. May in "Greenleaf" was crucial: "She thought the word, Jesus, should be kept inside the church building like other words inside the bedroom. She was a good Christian woman with a large respect for religion, though she did not, of course, believe any of it was true."

The new stamp, which costs 93 cents, has raised some eyebrows because it shows a young, glamorous O'Connor, smiling and wearing pearls. She is not wearing her trademark cats-eye glasses. As a New York Times essay noted, "What's Betty Crocker doing on Flannery's stamp?"

Wood said it's interesting to ponder a different question: How did O'Connor receive this salute from America's cultural powers that be in the first place? Surely the desire to honor a female writer was pivotal.

"If that is the question you are asking you can hardly get around Flannery O'Connor. Who outranks her? She is a giant in American culture," said Wood, author of "Flannery O'Connor and the Christ-Haunted South."

"It's safe to say this was not an attempt to honor all that O'Connor stood for. The American cultural elites have never known what to do with her faith. ... People keep trying to tame this lady, to make her nice. But you cannot make her nice because she wasn't nice. You cannot defang her."

But if the convictions in her stories unnerved some secularists, the bizarre and violent plot twists left many conservative believers shaking their heads, as well. In his lecture marking the stamp's release, Wood noted that her work is full of grotesque characters that walk with "a divinely inflicted limp" caused by their wrestling matches with real sins and with God. These flawed believers "both believe and behave strangely."

O'Connor heard all these muttering voices.

"When asked why her fiction, like that of so many other Southern writers, is rife with freaks, O'Connor famously replied that Southerners 'are still able to recognize one,' " said Wood. "They take the measure of themselves and others by the biblical plumb line that exposes all deviations from the true Vertical."

THE MAJORITY HAS NEVER BEEN RIGHT BY STEVE FINNELL

When the subject of Christianity has been debated the majority has never been right.

The majority of first century Jews rejected Jesus as the messiah.---The majority has never been right.

The majority of world rejects Jesus as the only Savior.---The majority has never been right.

The majority of those who claim to be Christians believe the false doctrine of original sin. They believe that because Adam and Eve sinned that all men are guilty of spiritual sin at birth. They believe in inherited sin.---The majority has never been right.

No man has inherited the guilt of Adam. Men will face spiritual death because of their own sins.

Romans 5:12 Therefore, just as through one man sin entered the world, and death through sin, and thus death spread to all men, because all sinned---(NKJV)

Death spread to all men because all men have sinned.

The majority of those who claim Jesus as Savior believe that modes of water baptism are sprinkling and pouring---The majority has never been right.

There are no translations that translate Mark 16:16 as such, "He who believes and has been sprinkled or poured shall be saved."---The majority has never been right.

Acts 2:38 Then Peter said to them, "Repent, and let every one of you be baptized in the name of Jesus Christ for the remission of sins; and you shall receive the gift of the Holy Spirit.(NKJV)
Galatians 5:1-4.....you have fallen from grace.(NKJV)

The majority of those who claim to be Christian believe that their church denomination is the final authority when it comes to faith and practice of the Christian faith---The majority has never been right.

The word of God found in the Bible and the Bible alone is not only the final authority, but the only authority for mankind.

THE MAJORITY WILL NOT BE GOING TO HEAVEN

If the majority were always right there would be many who find life eternal, however---The majority has never been right.