Handout picture released by the Attorney General of Mexico (PGR) showing Mexican officials Attorney General looking at the alleged end of the tunnel through which Mexican drug lord Joaquin "El Chapo" Guzman could have escaped from the Altiplano prison. at a house in Almoloya de Juarez, Mexico, on Sunday. | AFP PHOTO

His specialty has been building sophisticated tunnels to shuttle drugs across the border. The last tunnel he built apparently sprang Joaquin “El Chapo” Guzman to freedom over the weekend.
This was his second escape from Mexico’s high maximum security in 15 years.
A massive manhunt is underway for Guzman, whose powerful Sinaloa cartel has entry points into just about every region of the 2,000-mile U.S.-Mexico border.
Guatemala’s Interior Ministry said a special task force of police and soldiers were watching its border with southern Mexico for any sign of the fugitive drug lord.
To the north, U.S. Attorney General Loretta Lynch issued a statement offering “any assistance that may help support his swift recapture.”
The escape by Guzman, once considered the most important fugitive in the world after Osama bin Laden, was a slap in the face to U.S. and Mexican intelligence officials.
The news terrorized a string of protected witnesses testifying against him and was an embarrassment for President Enrique Peña Nieto, who was showered with worldwide praise after the drug trafficker was captured in February 2014.
The arrest then was a testament to U.S.-Mexico cooperation as American agents were seen on the ground and in the air, tracking down the man known as “Shorty” through northwestern Mexico.
Peña Nieto, traveling to Paris, interrupted his trip to address the latest setback, saying the escape was “an affront to the Mexican state” and vowing to use all federal resources to recapture Guzman.
The escape sent both shock waves and “told you sos” from law enforcement on both sides of the border, many of whom had spent years trying to nab a man seen as both a ruthless killer and Robin Hood in poor communities across the Sinaloa and Durango mountains, pouring millions into schools and infrastructure projects. 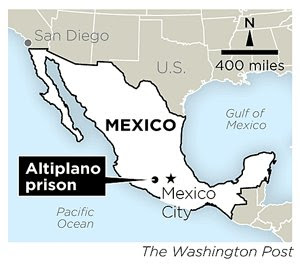 Extradition fought
For years, U.S. law enforcement officers had privately urged the Mexican government to extradite Guzman and other top criminal bosses who have deep pockets and are too powerful for Mexico’s weak judicial institutions. The escape came as Guzman’s lawyers fought tooth and nail against extradition attempts.
“Chapo knows too much, has too much information that would embarrass the Mexican government in general, and I suspect that’s one reason the Mexican government was reluctant to put him on a plane to face U.S. justice,” said Arturo Fontes, a former FBI agent and president of Fontes International Solutions, a consulting firm. He spent more than a decade tracking down Guzman.
“His escape is a joke, travesty of justice and demoralizing,” he said. “Mexico lost another 10 years when it comes to building trust with the United States.”
A U.S. undercover agent who spoke anonymously because he was not authorized to speak to reporters said: “This is like Osama bin Laden escaping prison. Shocking! Mind-boggling. Numbing. What does this say about Mexican corruption? Disgusting.”
The government detailed Guzman’s escape at a news conference Sunday. He was last seen at approximately 8:52 p.m. Saturday in the shower area of his cell at the Altiplano prison, the only part of the maximum-security cell where no cameras were placed. When prison guards showed up to see what was taking so long, they found the area empty and discovered an elaborate 20-inch-by-20-inch escape hatch opening to a rectangular passage that led to a mile-long tunnel running underneath the prison, according to Mexico’s national security commissioner, Monte Alejandro Rubido.
Guzman was long a legendary mastermind of man-made tunnels built along the U.S.-Mexico border, particularly between California and Sonora, to funnel into the U.S. billions in illicit drugs. He wasted no time in building his latest tunnel. This one included a motorcycle on rails and opened just a few miles from the nearest airport, officials said.
About 30 prison employees at Altiplano are being questioned, officials said.
Guzman was sent to maximum security at Altiplano prison 56 miles wests of Mexico City after his capture in February 2014.
Other star inmates
The mile-long long tunnel was started almost immediately after he entered prison. He worked on it for over a year, Fontes said, “supposedly without knowledge of prison authorities?”
Altiplano is considered the main and most secure of Mexico’s federal prisons and also houses Zetas drug cartel leader Miguel Ángel Treviño and Edgar Valdés Villarreal, known as “La Barbie,” of the Beltrán Leyva cartel. U.S. law enforcement officials worry about a similar prison escape by them.
The escape is likely to further damage Peña Nieto’s image, that of someone bringing stability and reining in a country run amok.
Peña Nieto took office in 2012 vowing to change the narrative of the country from that of violence to a country ripe and ready for investors. He also promised to confront the cartels, which have killed or caused the disappearance of more than 120,000 people since 2006 and left regions across the country mirroring failed states.
Before his election, politicians in Peña Nieto’s Institutional Revolutionary Party mocked their conservative rivals, specifically former President Vicente Fox, for letting Guzman escape in 2001 while they ran the country. They promised that would not happen again on their watch.
Rafael Fernandez de Castro, a Jay and Debe Moskowitz Professor at Syracuse University, said the latest escape is a “terrible blow to the credibility of the federal government.”
Some agents, both former and current, even questioned the government’s version of an elaborate escape plan, saying Guzman probably just cut a deal with corrupt officials and fled into the night.
“Chapo Guzman did not escape,” said Phil Jordan, former regional director of the DEA in Dallas. “He was allowed to escape, because he paid the right price.”
The Associated Press contributed to this report.
Follow Alfredo Corchado on Twitter at @ajcorchado.
Posted by jtf at 6:15 AM