All the ‘Clinton Cash’ questions Hillary refuses to answer 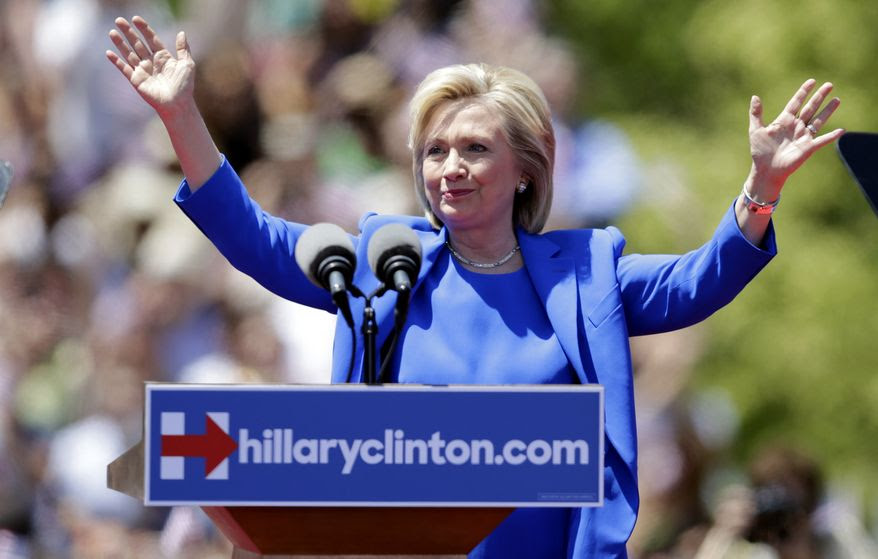 Democratic presidential candidate, former Secretary of State Hillary Rodham Clinton gestures before speaking to supporters Saturday, June 13, 2015, on Roosevelt Island in New York, in a speech promoted as her formal presidential campaign debut. (AP Photo/Frank Franklin II)
‘We need to stop the flow of secret, unaccountable money,” Hillary Clinton said Saturday during her vaunted campaign “do over.”
That she said this without a trace of irony is no real surprise. Ever since the release of “Clinton Cash” — which documented the Clintons’ love of secret and unaccountable money — the couple’s reaction has been to pretend the scandal has nothing to do with them.
Appearing on CNN, Bill Clinton claims that the millions the Clintons made from speeches paid for by foreign individuals and entities who had business before Hillary’s State Department were innocent and coincidental.
“[Hillary] was pretty busy those years,” Clinton said. “I never saw her study a list of my contributors, and I had no idea who was doing business before the State Department.”
Bill added: “No one has ever asked me for anything…I never thought about whether there was any overlap.”
Besides, as Bill explained, in a Bloomberg interview last week, “Has anybody proved that we did anything objectionable? No.”
Well, there you have it. Everything is on the up-and-up. Americans should just move along.
But they can’t. And they won’t. Not until, that is, Hillary Clinton begins explaining her myriad conflicts of interest in granular detail, especially since there are no e-mails or server to corroborate Bill’s claims of her innocence.
Indeed, save for a generic response to a generic question on the topic, Hillary Clinton has yet to answer a single question about “Clinton Cash.”
For example, Hillary hasn’t explained why her State Department approved the transfer of 20% of US uranium to the Russian government — even as her family foundation hauled in $145 million from investors in the deal, and Bill received $500,000 from a Kremlin-backed bank for a speech in Moscow.
Hillary has yet to explain why there was no conflict of interest in allowing top investors in the Keystone XL pipeline to pay her husband $1.8 million to deliver 10 speeches, even as she quietly shepherded an environmental impact study through her State Department that proved largely supportive of the pipeline.
Nor has Hillary explained why she violated the memorandum of understanding she signed with the Obama administration promising to disclose all donors, including the foreign head of the Russian government’s Uranium One, Ian Telfer, who funneled four donations totaling $2.35 million to the Clinton Foundation that were never revealed.
Or the 2 million shares of stock foreign mining magnate Stephen Dattels gave the Clinton Foundation, even as Hillary’s State Department allowed “open pit coal mining” in Bangladesh, where Dattels’ Polo Resources had a stake.
As Sunlight Foundation senior fellow Bill Allison told The Post, “It seems like the Clinton Foundation operates as a slush fund for the Clintons.”
Still, Bill Clinton assures us there’s nothing to see here.
Thankfully, so far investigative reporters aren’t listening. Indeed, in the wake of “Clinton Cash”’s publication, as Hillary’s silence has grown, so, too, has the number of reporters building on and and expanding the book’s findings.
Bloomberg and the Washington Post, for example, drilled down and discovered an additional 1,100 hidden foreign Clinton Foundation donations. Since the revelation, the Foundation has only released 24 of the secret foreign donors. When will Americans see the remaining 1,076 names? Hillary hasn’t said.
And thanks to the Huffington Post, we now know that in 2014 and 2015, Hillary delivered eight speeches totaling $1.6 million in speaking fees paid for by two of the largest banks tied to the Keystone XL pipeline.
That’s in addition to the $1.8 million Bill bagged for the 10 Keystone investor-funded speeches he delivered during Hillary’s tenure as Secretary of State.
Perhaps this helps explain Hillary’s reticence over the last few years to express opposition to the pipeline, much to ­environmentalists’ chagrin.
We now know 181 Clinton Foundation donors lobbied Hillary’s State Department; that the Clintons’ family foundation received millions from Qatar, as well as donations from FIFA, the soccer organization now enmeshed in a bribery and corruption scandal of global proportions; that the Clintons have a secret “pass-through” company, WJC, LLC.; that Hillary’s State Department “approved $165 billion worth of commercial arms sales to 20 nations whose governments have given money to the Clinton Foundation,” according to the International Business Times analysis.
On and on it goes. There have been enough post-book revelations to fill a second volume, or a third.
The surge in new revelations is an encouraging reinvigoration of investigative journalism, one that is refreshingly responsive to the public’s hunger for greater transparency and accountability from elected leaders.
As Bob Woodward recently put it, “You should insist that the sleeping giant, which is both the country and the media, wake up. The result could be, if you are persistent, that we have a kind of ‘Unrestricted Investigative Warfare’ as the news organizations, the giants, the little people, left, right and center compete to follow the money and explain its corruptions and ramifications.”
To all of these revelations, the Clinton response has been to ignore, deflect, or try to discredit me. George Stephanopoulos tried to suggest I was partisan (how’d that work out?) while sympathizers have been reduced to arguing that well, it’s not technically illegal.
But even as Hillary Clinton tries to wipe the slate clean and start her campaign over, these questions will dog her from now until election. She can’t dodge them forever.
Peter Schweizer is the author of the bestseller “Clinton Cash: The Untold Story of How and Why Foreign Governments and Businesses Helped Make Bill and Hillary Rich” (Harper), out now.
FILED UNDER 2016 PRESIDENTIAL ELECTION ,  HILLARY CLINTON
Posted by jtf at 6:40 AM