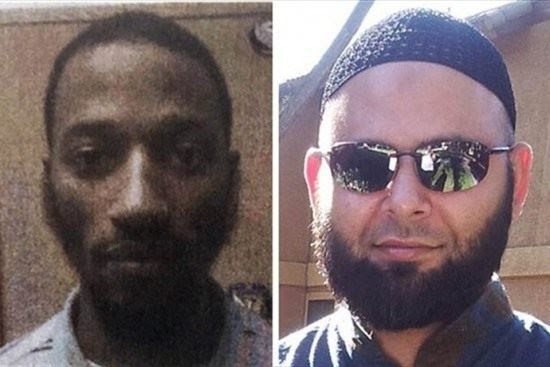 The suspected gunmen, Elton Simpson, 31, and Nadir Soofi, 34, wounded a security guard before being shot dead by police at an event showcasing cartoons mocking the Prophet Mohammed.

Pamela Geller and Robert Spencer organized a cartoon contest in Garland, Texas to demonstrate the need to exert the right to free speech against Islamic threats.  This event in actuality, and predictably, provoked a violent response from two radical Muslims that resulted in their deaths.  It also has called down a firestorm on the organizers’ own heads from both liberals and conservatives for unnecessarily insulting Islam and Muslims.
There’s a far better and more important way to exercise free speech about Islam, and Robert Spencer in particular should be aware of it and is well placed to facilitate it.

Publicizing cartoons of Mohammed is a thumb in the eye of Muslims, particularly pious ones holding to the Wahhabi and Salafist view that portraying or mocking Mohammed is blasphemy.  Cartoons are therefore a double outrage.  However, cartoons do nothing substantial to undermine the ideology of radical Islam that plagues the earth, they just expose a raw nerve among some Muslims and hence elicit sympathy from non-Muslims, even including prominent Fox News pundits such as Bill O’Reilly and Martha MacCallum and conservative Catholic leaders such as Bill Donohue.

It would be far more effective to have a calm, protracted discussion and debate about the origins of Islam and the real life of Mohammed.  Such an event should be more akin to a panel discussion mediated by Jim Lehrer than a media circus presided over by Bill O’Reilly or Jon Stewart, and it should bring in views from across the political and religious spectrum.

Back to Spencer, he wrote a summary of deep and serious research, Did Muhammad Exist?: An Inquiry Into Islam’s Obscure Origins.  He was apparently attempting to popularize some dense, highly academic, and quite inaccessible research contained in books such as The Hidden Origins of Islam: New Research into Its Early History.  This book is a collection of essays, edited by two highly respected German academics of Islam, Gerd Puin and Karl Heinz Ohlig.  Puin’s reputation is so sterling that the government of Yemen asked him to lead an analytical project on the oldest known copies of the Qur’an and related fragments.  It’s highly significant that two of the authors of the essays in The Hidden Origins of Islam, Christoph Luxenberg and Ibn Warraq, feel compelled to publish under pseudonyms, or more accurately noms de guerre, for fear of reprisal from Muslim fanatics.

The work of these academics and others like them is far more important than any cartoon of Mohammed could ever be.  It is part of research dating from the 19th Century that tried to understand the origins of Islam based on objective, verifiable information rather than only the traditional Islamic sources of the time that have led to the common view of Mohammed, the Qur’an, and Islam.  No overall consensus has emerged, but a few points of agreement exist, widely unrecognized by the general public (based on my own discussions with well-educated, well-informed non-Muslims).

Probably the most important point from this work is that Arabic as both an oral and especially written language was evolving in the 7th and 8th Centuries and was in a state of great flux.  Writers were using vocabulary and written characters borrowed from the closely related Aramaic-Syriac that was the lingua franca of the Mideast of the era.  Using an understanding of these languages contemporary with the putative timeframe of Mohammed and the Qur’an leads researchers to significantly different understandings of the scripture and the traditions about the life of Mohammed.

Another point of agreement appears to be that non-Muslim sources from the period, including ancient coins and inscriptions, do not clearly support the traditional story about the role of Mohammed, the emergence of Islam, or the origin of the Qur’an.  Instead, they point to a very different set of possibilities.

The thinking of the academics goes much farther than basic points such as these and has profound implications for the understanding of the Qur’an and Mohammed’s role in founding Islam.  Without opining on their accuracy, here are a few of the more meaningful implications being discussed by these academics as a group:

·      Mohammed may be a mythical figure, or he may have been an historical figure with a very less important role and in a very different locale than Islamic sources claim.

·      Islam may not have arisen in the Hijaz (modern western Arabia), but rather in Mesopotamia.

·      Islam may have originated as a Christian sect in which Jesus was considered a great teacher and prophet but not divine.  This sect specifically may have arisen out of the Nestorian sect after the collapse of Sassanid Empire at the hands of the Byzantines – not Arab Muslim armies.

·      The defeat of the Sassanid Empire in 622 may have been why Arabs selected that year to reset their calendar, rather than Mohammed’s supposed exile to Medinah.

·      References to “Mohammed” in the Dome of the Rock – the earliest monument of putative Islamic origin – and contemporary coinage may not have referred to a person’s name, but rather might have meant “deserving of praise.”  Hence, the commonly understood phrase “Mohammed is Allah’s messenger” may have instead originally meant “praise to the messenger of Allah” (understood to be Jesus).

·      The Qur’an itself may not have been compiled until almost 100 years after the year Mohammed supposedly died and it may have been brought together from disparate sources, with some portions even written specifically for the purpose of claiming a divine heritage for an imperial religion.

·      The actual authors of the Qur’an or significant parts of it may have been members of the ruling elite of the emerging Arab empire of the early 8th Century.  Their objective may have been to claim divine support for their regime in an effort to counterbalance similar claims made by their adversaries, the Byzantines.

In short, this scholarship calls into question the central claim of Islam, that Mohammed lived and produced the Qur’an from divine revelations.

If these questions received wide attention and resulted in an open debate among academics from both within and outside Islam, and if they were resolved in anything like the form outlined above, then Islam itself would undergo a fundamental transformation.  Among the most important results of this transformation would be that the most violent, aggressive commands from the Qur’an, which are primarily in the penultimate surah (by traditional temporal reckoning, Surah 9) and hence abrogate all more peaceful and ecumenical verses, would therefore be recognized to be the recruiting literature of imperial functionaries rather than commands from the deity.

Imagine if the average Muslim witnessed this debate and its conclusions: The appeal of strictly literalist readers of the Qur’an and Sunna such as the Wahhabis and Salafies would evaporate.  These radicals would no longer have credible claim to divine commandments.

Such an outcome may be far too much to hope for any time soon in those Muslim societies that are largely untouched by outside influences and hence cling to their traditional beliefs, such as Afghanistan and rural areas of Pakistan, Iran, the Mideast, and North Africa.  But what of Muslims in more cosmopolitan environments, and especially in the West?  Open discussion of Islam’s origins and authority might lead to a powerful shift in how these people view their religion and its commandments.

This is a possibility with implications far too great for world peace and prosperity to overlook, particularly because of mere politically correct inhibitions.  Respectfully discussing and debating these ideas would be a tremendous benefit to the entire world.  Such debates should be embraced by academics and journalists from across the political spectrum, and from outside Islam as well as those from within Islam who are sufficiently open-minded and brave to participate.

Rather than hold contests intended to violate religious prohibitions just because such an act should be protected speech, surely people such as Spencer and Geller, as well as Bill O’Reilly, Megan Kelly, Jim Lehrer, Bill Donohue, should instead endeavor to undertake and organize this debate.  They should put the likes of Puin, Ohlig, Luxenberg, and Warraq on the air to explain their views to the public as a whole.  They should invite Islamic scholars and apologists to join these discussions and debate the merits.  These debates should be public and highly promoted.

This is a challenge to all these people, but especially Spencer, Geller, and the journalists, to capitalize on the publicity of the contest and subsequence violence in Garland and turn that notoriety to good use.  Let’s have an open debate about the origins of Islam and the Qur’an and let’s expose that thinking to as many people as possible, around the world.