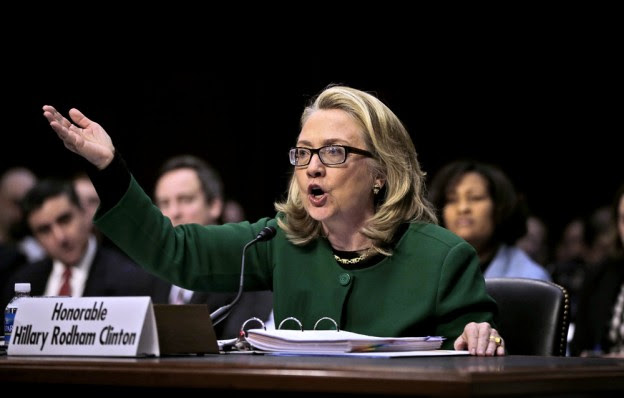 Secretary of State Hillary Rodham Clinton gestures as she testifies on Capitol Hill in Washington before the Senate Foreign Relations Committee hearing on the deadly attack on US diplomats in Benghazi, Libya. (AP)

After Friday's release of Hillary Clinton's secret emails related to Libya, the Wall Street Journal rana story headlined, "Emails Show Clinton Was Warned Over Security in Benghazi Ahead of Attack." The headline oversold the story. The only warnings about Benghazi security in the emails are from April and June of 2011, more than a year before the Sept. 11, 2012 terrorist attack, along with one brief mention in an email from February 2012, seven months before. The thing is, the Clinton emails just don't have much in them about the violence that would ultimately lead to the Benghazi attacks, and that in itself is a story.
Beginning in the spring of 2012, the threat — and the reality — of violence in Libya were ever-present. There was attack after attack, and warning after warning, yet none seemed to penetrate Hillary Clinton's carefully-constructed email world. Most significantly, on Aug. 16, 2012, less than a month before the attack, Ambassador Chris Stevens sent an urgent warning to the State Department saying Americans in Libya could not defend U.S. facilities "in the event of a coordinated attack, due to limited manpower, security measures, weapons capabilities, host nation support, and the overall size of the compound." Clinton has testified under oath that she never saw Stevens' call for help.
Indeed, what is striking about Clinton's Libya-related emails is how few references there are to the violence that led to the Sept. 11 attack. Just to show how significant that violence was, it's worth looking at the State Department's special investigation, the Accountability Review Board, which, for all its flaws — it has been reasonably called a "whitewash" — contains a good timeline of violent events in the months leading up to the Benghazi attack.
"2012 saw an overall deterioration of the security environment in Benghazi, as highlighted by a series of security incidents involving the Special Mission, international organizations, non-governmental organizations (NGOs), and third-country nationals and diplomats," the report said, including a list of incidents:
March 18, 2012 — Armed robbery occurs at the British School in Benghazi.

March 22, 2012 — Members of a militia searching for a suspect fire their weapons near the SMC [Special Mission Benghazi compound] and attempt to enter.

April 2, 2012 — A UK armored diplomatic vehicle is attacked after driving into a local protest. The vehicle was damaged but occupants uninjured.

April 10, 2012 — An IED (gelatina or dynamite stick) is thrown at the motorcade of the UN Special Envoy to Libya in Benghazi.

May 28, 2012 — A previously unknown organization, Omar Abdurrahman group, claims responsibility for the ICRC attack and issues a threat against the United States on social media sites.

June 6, 2012 — IED attack on the SMC. The IED detonates with no injuries but blows a large hole in the compound's exterior wall. Omar Abdurrahman group makes an unsubstantiated claim of responsibility.

June 11, 2012 — While in Benghazi, the British Ambassador's convoy is attacked with an RPG and possible AK-47s. Two UK security officers are injured; the UK closes its mission in Benghazi the following day.

July 30, 2012 — Sudanese Consul in Benghazi is carjacked and driver beaten.

August 5, 2012 — ICRC Misrata office is attacked with RPGs. ICRC withdraws its representatives from Misrata and Benghazi.

August 9, 2012 — A Spanish-American dual national NGO worker is abducted from the Islamic Cultural Center in Benghazi and released the same day.

August 20, 2012 — A small bomb is thrown at an Egyptian diplomat's vehicle parked outside of the Egyptian consulate in Benghazi.
"It is worth noting," the State Department report concluded, "that the events above took place against a general backdrop of political violence, assassinations targeting former regime officials, lawlessness, and an overarching absence of central government authority in eastern Libya."
The unspoken conclusion was that such a level of violence, combined with Ambassador Stevens' urgent words, should have been a huge, flashing warning that went all the way to the secretary of state. And yet there is nothing in the Clinton emails from the months leading up to Benghazi.
Even on the day of the attack — the 11th anniversary of 9/11, and therefore a time of heightened alert for U.S. forces and officials around the world — Clinton showed no concern for security in Libya. Very early on the morning of the attack, Clinton sent an email to close aide Huma Abedin. The reason? Clinton wanted a copy of a movie about Libya made by the French celebrity intellectual Bernard Henri-Levy and produced by Clinton friend and Democratic donor Harvey Weinstein. "Can you get us a copy of Bernard Henri-Levi's [sic] film about Libya?" Clinton asked Abedin. "I think Harvey made it and showed it at Cannes last spring."
Why do the emails show such a lack of concern? There are a few possible reasons.
1) Clinton did not turn over all Libya-related emails. It's fair to say many Republicans believe that, and statements from House Benghazi Select Committee chairman Trey Gowdy indicate that he suspects Clinton is withholding information. "There are gaps of months and months and months," Gowdy said on CBS in March. "And if you think to that iconic picture of her on a C-17 flying to Libya, she has sunglasses on and she has her handheld device in her hand, we have no emails from that day. In fact, we have no emails from that trip. So, it strains credulity to believe that if you're on your way to Libya to discuss Libyan policy that there's not a single document that has been turned over to Congress. So, there are huge gaps."
2) Clinton's handling of the Libya crisis was largely done without email. Did the secretary address the crisis of growing violence by old-fashioned means — phone, personal meeting, paper memos? It's possible, but remember that back in March, Clinton said she had turned over about 30,000 emails to the State Department and deemed another 32,000 private. So she was clearly an email user. As far as the Libya issue itself is concerned, answering the question would require a level of cooperation from Clinton and from the State Department that neither has exhibited so far.
3) Clinton, and her top State Department aides, just weren't all that concerned about the Libya situation. Perhaps the absence of emails about dangers in Benghazi indicates that the situation simply didn't rise to a very high level of importance in Clinton's world. It could be that there is little evidence in the emails of her dealing with the problem because she did not, in fact, deal with the problem.
Right now, Gowdy's Benghazi committee is the best chance the public has of finding out the answers. Truth be told, it's not a particularly good chance. Gowdy has pointed out many times that he does not have the authority of a Justice Department prosecutor, a tacit admission that if Clinton wants to stonewall the committee, she can stonewall the committee. Certainly Clinton's destruction of all of her emails, plus all of her email backups, suggests she is in a hunker-down mode and is determined not to provide Gowdy or anyone else any more information about Benghazi. That means Gowdy will have to find some other route to the story, or give up.
Posted by jtf at 6:12 AM