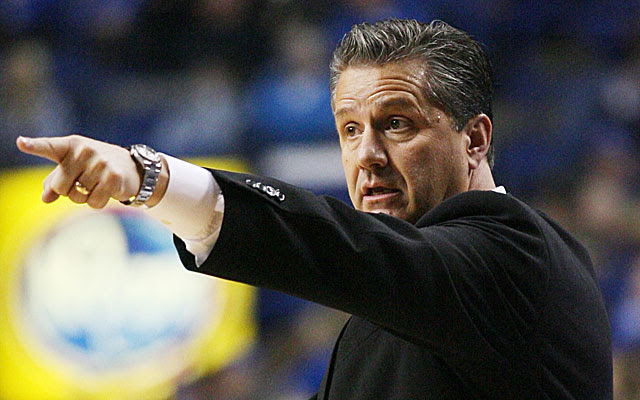 
Here we are. Kentucky, the No. 1-ranked team in the country — coached by John Calipari — is on the cusp of NCAA history, 31-0 after Saturday’s win over Florida. Meanwhile, the folks at UMass have decided to retire Coach Cal’s “number,” and this weekend marks the 20th anniversary of him refusing to allow a Globe reporter to visit his home for Selection Sunday.
Sometimes there is not enough space in our newspaper to articulate all the thoughts, and state all the points, that need to be made.
Let’s start with this: John Calipari is a magnetic figure, undoubtedly the greatest college basketball recruiter of the 21st century. He works the NCAA’s cesspool system better than any man alive. He is charismatic. He came to Amherst more than a quarter of a century ago as a Rick Pitino wannabe, but now he has vaulted over Pitino, and created the Brand of Cal. He is probably going to win a second national championship with Kentucky this year and is no doubt a swell dancer and would make for a fine dinner companion.
But as a Massachusetts taxpayer, I have a problem with UMass “retiring” Coach Cal’s number.
Really? Bill Cosby’s jersey is not available?
Calipari is a man who stretches the rules, and wins. He won at UMass. He won at Memphis. He took both schools to the Final Four, but both appearances were “vacated.’’ They were erased. You know the drill. Ineligible players. Phony SAT tests. The usual. So, while Coach Cal and Pitino are the only coaches to take three schools to the Final Four, Cal’s also got more vacancies than a Days Inn in downtown Detroit. And our state university is going to honor him? Again?
At Kentucky, Coach Cal has a perennial team of NCAA lottery picks. He has a chance to produce the first undefeated college team since Bobby Knight’s Indiana Hoosiers 39 years ago. But it’s impossible to escape the notion that Coach Cal is a glorified AAU bag man.
I see Calipari on the bench and I see bundles of cash. I see classroom vacancies. I must be imagining things.
Cal promotes the dribble-drive and gets his one-and-done kids to the NBA. He walks hand-in-hand with the fraudulent, sanctimonious governing body that insists we refer to his players as “student-athletes.’’ What a joke.
But the joke is on us when UMass chooses to honor Cal during the 2015-16 season, a year that will mark the 20th anniversary of the Minutemen’s one and only trip the Final Four, an appearance that officially never happened.
UMass looks pathetic. It’s bad enough that the school bosses have signed off on a ridiculous, costly, and futile plan to play Bowl Subdivision football. Now they are once again honoring a man who produced a program that ultimately disgraced the school.
In case you missed it, Cal took UMass to the Final Four at the Meadowlands in the spring of 1996 (ironically, the Minutemen were eliminated by Pitino’s eventual national champs from Kentucky), but it turned out that star center Marcus Camby already had turned professional while he was still in school, and UMass’s appearance was officially erased by the NCAA.
Coach Cal got out of town before the posse arrived, lying to everyone on his way out the door as he took millions from the New Jersey Nets. After failing with the NBA, he returned to college ball, took Memphis to the Final Four, but again had the appearance redacted because of more violations.
Now, Nefarious John is at Kentucky, producing a conga line of lottery picks, some of whom perhaps actually spend several hours on campus. Hardly any of them graduate, of course. But that’s not John’s job. The system is the system. And the needy, deprived fans of Kentucky basketball somehow manage to devote their lives to this product. They are OK when a raft of Kentucky players get drafted and Cal announces that it’s the greatest night in the history of Kentucky basketball. Kentucky fans are defiantly proud of their one-and-done semi-pro players who visit campus briefly on their way to the NBA.
But it’s all OK because, you know, Cal is just working within the system. And he is really good at it. The Wildcats are fun to watch (did you see the spectacular comeback against Georgia Tuesday night?). And if you have an 18-year-old son who is one year away from NBA millions, send him to Kentucky. Just don’t insult everybody’s intelligence by calling him a “student-athlete.’’
This week marks the 20th anniversary of Coach Cal barring the Globe from his Shutesbury home on Selection Sunday. The Globe’s UMass beat reporter was the estimable Joe Burris, who had covered the Minutemen for six seasons and wrote stories on 29 regular-season games in 1995. Calipari was upset because the Globe had reported on the poor grades and academic probation of UMass’s student-athletes — a report that should have served as fair warning that our State U. was sacrificing standards in the name of Final Four glory.
“The Globe’s not invited,’’ UMass publicist Bill Strickland said 20 years ago. “He did not want the Boston Globe in his home . . . I think he should be entitled to invite anyone he wants to his house. And to keep anyone out.’’
Fair enough. But I found it amazing that Burris — a man worthy of marrying the daughter of Nobel Peace Prize winner Archbishop Desmond Tutu — was not allowed in the home of a man who prevailed over a program that disgraced Massachusetts. It was like getting scolded for cheating by Alex Rodriguez.
And now we are honoring Coach Cal.
March Madness, indeed.
Dan Shaughnessy is a Globe columnist. He can be reached at dshaughnessy@globe.com. Follow him on Twitter @Dan_Shaughnessy
Posted by jtf at 7:21 PM