'Unbroken': The Rest of the Story

In a Plugged In interview with Luke Zamperini, real-life son of Unbroken’s Louie Zamperini, Luke called his father’s life a “five-act play.” Movies run three acts, Luke said, which makes it impossible to tell Louie’s story in full. Of Angelina Jolie’s big-screen retelling of the Zamperini story, Luke says, “I think she did a masterful job.”
I’d mostly agree. In Unbroken (released this Christmas), Jolie got all the big cinematic elements in: Louie’s wayward youth, his Olympic glory, his harrowing 47-day ordeal at sea during World War II, his bitter imprisonment in Japanese POW camps and, most critically, his battle of wills with the sadistic guard known as “The Bird.”
And yet the movie stopped just when Louie’s life was getting interesting.
Sure, Louie experienced more highs and lows by the age of 28 than most of us would do in a couple of centuries. But according to Laura Hillenbrand’s book Unbroken (the inspiration for the movie, of course), perhaps Louie’s most serious fight—a fight not of body, but of soul and spirit—happened after he got home.
It’s not like Jolie ignored Louie’s beliefs. In fact, she emphasized them. When Louie bargains with God aboard a life raft without food or water—when he prays, “If you will save me, I will serve you forever”—Jolie makes sure we notice that moment as critical.
But in Hillenbrand’s story, that moment isn’t particularly transformative at the time. The promise he made isn’t binding. There’s no contract associated with it, no notary to seal it. We rarely hear about Louie’s faith throughout the rest of his time as a POW—few if any indications that he prayed when he was starving or suffering from horrible dysentery or being beaten by the Bird. Louie survives. He goes back home. And that moment in the raft is not mentioned again.
For moviegoers, Louie’s story wraps with that joyful homecoming. While she alludes to Louie’s stateside struggles and recovery in a series of postscripts, she chooses to end her movie with something that feels very much like a traditional Hollywood happy ending. 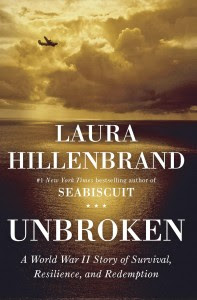 ‘Course in real life, people rarely ride off into the sunset to live happily ever after. Those who read Hillenbrand’s story know that Louie was deeply scarred by his experiences. Indeed, those emotional wounds would still bleed. Night after night he’d dream about the Bird. He started drinking heavily, hoping the booze would render him dreamlessly unconscious. One night, he dreamed that he and the Bird were fighting to the death, their hands locked around each other’s throats. When he came to, he found that he was choking his pregnant, terrified wife.
He hoped to return to Japan. But it wasn’t initially to offer forgiveness to his abusive captors, as he eventually did (and as Jolie notes in her postscript). He had hoped to find and kill the Bird.
But then one night in 1948, Louie’s wife Cynthia—now ready to divorce her angry, tortured husband—goes to see Billy Graham during one of his crusades. She’s mesmerized. And she convinces Louie to go see this young (preacher).
He hates it. Not surprising, I suppose. He never had much use for religion before. But now, still struggling with the horrors of war three years after the shooting stopped, he hates it. He hates God. That promise he made on that life raft has been long forgotten.
But Cynthia cons him into going a second night, where Graham speaks about the mystery of suffering and the miracle of grace, weaving the message in with references to the beauty of creation. Hillenbrand writes:

Louis was winding tight. He remembered the day when he and Phil, slowly dying on the raft, had slid into the doldrums. Above, the sky had been a swirl of light; below, the stilled ocean had mirrored the sky, its clarity broken only by a leaping fish. Awed to silence, forgetting his thirst and his hunger, forgetting that he was dying, Louie had known only gratitude. That day, he had believed what lay around them was the work of infinitely broad, benevolent hands, a gift of compassion. In the years since, that thought had been lost.
Graham went on. He spoke of God reaching into the world through miracles and the intangible blessings that give men the strength to outlast their sorrows. “God works miracles one after another,” he said. “… God says, ‘if you suffer, I’ll give you the grace to go forward.’”

Louie begins to count his miracles—the strange ways in which he was preserved in times of terror and crisis—and the memories angered and terrified him. He grabbed Cynthia by the wrist and rose to storm away. And then, suddenly, everything … vanished. He was back in the Pacific, sun beating down, surrounded by sharks, his company two starving, dying men.

He felt words whisper from his swollen lips. It was a promise thrown at heaven, a promise he had not kept, a promise he had allowed himself to forget until just this instant; If you will save me, I will serve you forever. And then, standing under a circus tent on a clear night in downtown Los Angeles, Louie felt rain falling.

Hillenbrand says Louie’s nightmares and flashbacks stopped that night. The Bird never returned.
That, too, smacks of a pat, too-perfect ending—one we might see in any number of trite Christian movies. We speak of the healing power of God and grace in our lives, but rarely is that grace so instant, so complete. My own experience is not as tidy as that. My walk toward God continues still.
And yet, at least as Louie Zamperini himself tells it, this unrealistic ending was quite real. His whole life changed under Billy Graham’s tent. Sometimes, Louie’s story tells us, miracles happen. Sometimes, God really is in the machine.
Jolie’s movie is a dandy account of Louie’s amazing experiences, deeply faithful to both the letter and the spirit of the story. But it can’t recount a life. Not completely. So for those who see Unbroken (or even those who don’t) and want to know more, check out Hillenbrand’s book. You won’t regret it.