He stands accused of conspiring to arm the Mafia, but the media won’t say it. 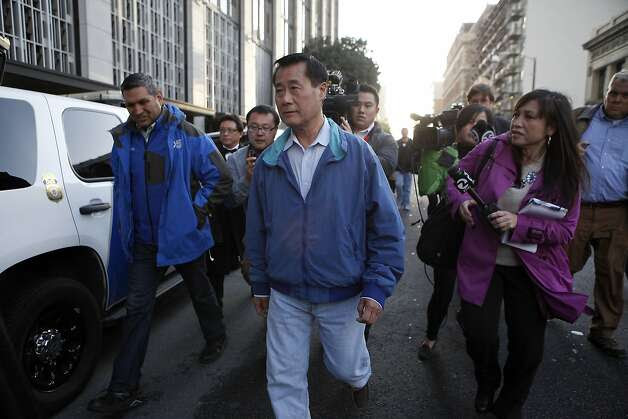 Senator Leland Yee is chased by reporters as he leaves the federal building in San Francisco, CA, Wednesday Mar. 26, 2014. The FBI raided State Sen. Leland Yee's office in Sacramento and other locations were searched by the FBI in San Francisco. He was reportedly arrested on public corruption charges Wednesday morning amid raids of his office in Sacramento and searches by the FBI in San Francisco. Photo: Michael Short, The Chronicle
Having assiduously ignored one of the gonzo corruption stories of the last decade, CNN this week offered a peculiar defense of its silence. Rankled by a curious Twitter user, who asked why “the Leland Yee story appears nowhere on CNN’s website,” the outlet explained that the decision was “in line with us covering state senators & state secretary of state races just about never.” “You see another conspiracy?” the account asked its inquisitor, snippily.

There is a lot of space between bias and conspiracy, and one does not have to believe that CNN’s editorial staff is sitting around stroking white cats and cackling for its explanation to remain unsatisfactory. A search for the words “state senator” on CNN’s website returns more than 2,800 results, the vast majority of them stories about . . . state senators. “Wendy Davis” — one such state senator — yields 168 entries, many of which predated Davis’s running for governor; “Stacey Campfield,” a Tennessee state senator who has made some choice comments about homosexuals, returns five; and “Ted Nugent,” who is not an elected figure of any sort, returns 186, a substantial number of which relate to comments he made while supporting Texas attorney general and gubernatorial nominee Greg Abbott earlier in the year. For his part, Yee’s name returns just one result, a video in which, per the outlet’s own blurb, he “discusses a bill to help prevent children from having access to violent video games.”

If we were to take CNN at its word, then, we would conclude that state senators are unusually fascinating when discussing video games, homosexuality, or abortion, but utterly unremarkable when indicted by the FBI for negotiating with Muslim separatist groups in the Philippines and conspiring to put missile launchers and fully automatic weapons into the hands of the Mafia. “Conspiracy”? Nah. That requires self-awareness.
Still, compared with the alternative, CNN’s radio silence seems almost wise. Elsewhere, Yee has been cast as a bit player in his own extraordinary story. On Sunday, the Sacramento Bee flirted with the conceit that he was a mere pawn, casting the tale as one primarily of debt rather than criminality, and asking inexplicably whether it was “time to revamp the state’s campaign-finance system.” Yesterday, the Huffington Post’s Paul Blumenthal went one further, pleading rather creatively that Yee’s “bombshell corruption case shines [a] merciless light on how politicians raise money.” “See, at one level, how ordinary Yee’s efforts look,” Blumenthal proposed. “He is trying to raise money to pay off old campaign debts and to run a new campaign.”

As if by clockwork, Blumenthal then brought up the Citizens United case, inquiring tendentiously as to whether Yee’s “ordinary” crimes disprove Justice Kennedy’s prediction that his decision “will not cause the electorate to lose faith in our democracy.” “Yee’s alleged actions,” Blumenthal concluded, “raise the question of whether that is, in fact, true.”

It seems — though I will grant that one is significantly more brazen than the other — that Senator Harry Reid’s ongoing insistence that the beneficence of the Koch Brothers can explain the current fortunes of the Democratic party is of an unlovely piece with Blumenthal’s suggestion that a recent influx of campaign spending can explain the corruption that has been a feature of politics from the beginning of time. Just as Reid has spent a good portion of the last month attempting to persuade the public that the rising power of the Koch Brothers is causing Americans’ declining trust in the ruling class, so Paul Blumenthal would rather you believe that the political climate is turning our public servants into fiends than acknowledge that human beings are inherently fallible and that men of all sorts are wont, like Shakespeare’s Richard, to “clothe [their] naked villainy with odd old ends stol’n out of holy writ, and seem a saint, when most [they] play the devil.”

As much as anything, the Right’s skepticism toward Leviathan rests heavily upon the understanding that trusting some human beings with great power over others is an extraordinarily dangerous thing to do — however virtuous we might believe them to be. By definition, governments are full of people – some of whom are honest, some of whom are not; some of whom are competent, some of whom are inept; some of whom are wise, some of whom are reckless. As Kevin D. Williamson observed acerbically last week, this has profound implications for our politics, which has largely become a fight between people who believe “our institutions could be channels of moral action and reliably ethical arbiters of such ill-defined standards as ‘fairness’ and ‘social justice,’ if only we put the right people in power” and people who believe “that man is a fallen creature” and will be so forevermore.

Which is to say both that ideas matter and that they have consequences. Hearing for the first time about Leland Yee, my reaction was to sigh and to roll my eyes — no great matter, given my low expectations and cynical disposition. Across the aisle, by contrast, each and every such sigh represents a terrible concession to reality — a heartbreaking acknowledgement, however reluctant, that men do not become angels when they take the oath of office, and that the imprimatur of the state cannot iron out the worst impulses of the wicked. Too many sighs at once, and the whole edifice is at risk of coming down, which leaves a nasty choice, it seems: Blame the wreckers — the Kochs, Citizens United — for the conduct of the fallen, or, preferably, pretend that it didn’t happen at all.

— Charles C. W. Cooke is a staff writer at National Review.
Posted by jtf at 6:28 AM

Email ThisBlogThis!Share to TwitterShare to FacebookShare to Pinterest
Labels: Media and Culture, Politics