The wages of weakness 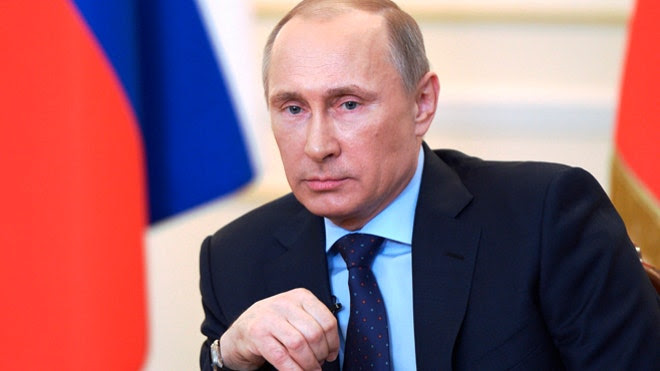 President Vladimir Putin listens journalists' questions on current situation in Ukraine at the Novo-Ogaryovo presidential residence outside Moscow on Tuesday, March 4, 2014. (AP)
Vladimir Putin is a lucky man. And he’s got three more years of luck to come.
He takes Crimea, and President Obama says it’s not in Russia’s interest, not even strategically clever. Indeed, it’s a sign of weakness.
Really? Crimea belonged to Moscow for 200 years. Russia annexed it 20 years before Jefferson acquired Louisiana. Lost it in the humiliation of the 1990s. Putin got it back in about three days without firing a shot.
Now Russia looms over the rest of eastern and southern Ukraine. Putin can take that anytime he wants — if he wants. He has already destabilized the nationalist government in Kiev. Ukraine is now truncated and on the life support of U.S. and European money (much of which — cash for gas — will end up in Putin’s treasury anyway).
Obama says Putin is on the wrong side of history, and Secretary of State John Kerry says Putin’s is “really 19th-century behavior in the 21st century.”
This must mean that seeking national power, territory, dominion — the driving impulse of nations since Thucydides — is obsolete. As if a calendar change caused a revolution in human nature that transformed the international arena from a Hobbesian struggle for power into a gentleman’s club where violations of territorial integrity just don’t happen.
“That is not 21st-century, G-8, major-nation behavior,” says Kerry. Makes invasion sound like a breach of etiquette — like using the wrong fork at a Beacon Hill dinner party.
How to figure out Obama’s foreign policy? In his first U.N. speech, he says: “No one nation can or should try to dominate another nation.” On what planet? Followed by the assertion that “alignments of nations rooted in the cleavages of a long-gone Cold War” — like NATO? — “make no sense in an interconnected world.”
Putin’s more cynical advisers might have thought such adolescent universalism to be a ruse. But Obama coupled these amazing words with even more amazing actions.
(1) Upon coming into office, he initiated the famous “reset” to undo the “drift” in relations that had occurred during the George W. Bush years. But that drift was largely due to the freezing of relations Bush imposed after Russia’s invasion of Georgia. Obama undid that pushback and wiped the slate clean — demanding nothing in return.
(2) Canceled missile-defense agreementswith Poland and the Czech Republic. Without even consulting them. A huge concession to Putin’s threats — while again asking nothing in return. And sending a message that, while Eastern Europe may think it achieved post-Cold War independence, in reality it remains in play, subject to Russian influence and interests.
(3) In 2012, Obama assured Dmitry Medvedev that he would be even more flexible with Putin on missile defense as soon as he got past the election.
(4) The Syria debacle. Obama painted himself into a corner on chemical weapons — threatening to bomb and then backing down — and allowed Putin to rescue him with a promise to get rid of Syria’s stockpiles. Obama hailed this as a great win-win, when both knew — or did Obama really not know? — that he had just conferred priceless legitimacy on Bashar al-Assad and made Russia the major regional arbiter for the first time in 40 years.
(5) Obama keeps cutting defense spending. His latest budget will reduce it to 3 percent of GDP by 2016 and cut the army to pre-Pearl Harbor size — just as Russia is rebuilding, as Iran is going nuclear and as China announces yet another 12-plus percent increase in military spending.
Puzzling. There is no U.S. financial emergency, no budgetary collapse. Obama declares an end to austerity — for every government department except the military.
Can Putin be faulted for believing that if he bites off Crimea and threatens Kiev, Obama’s response will be minimal and his ability to lead the Europeans even less so?
Would Putin have lunged for Ukraine if he didn’t have such a clueless adversary? No one can say for sure. But it certainly made Putin’s decision easier.
Russia will get kicked out of the G-8 — if Obama can get Angela Merkel to go along. Big deal. Putin does care about financial sanctions, but the Europeans are already divided and squabbling among themselves.
Next weekend’s Crimean referendum will ask if it should be returned to Mother Russia. Can Putin refuse? He can already see the history textbooks: Catherine the Great took Crimea, Vlad (the Great?) won it back. Not bad for a 19th-century man.
Read more from Charles Krauthammer’s archive, follow him on Twitter or subscribe to his updates on Facebook.
Read more on this issue:
Henry Kissinger: How the Ukraine crisis ends
E.J. Dionne: Crisis in Ukraine? Blame Obama!
Anne Applebaum: Russia’s Western enablers
The Post’s View: Mr. Putin might actually believe his own propaganda
David Ignatius: Robert Gates tells Republicans to cool it on Ukraine
Posted by jtf at 6:51 AM