The incompetence of our neo-monarchy 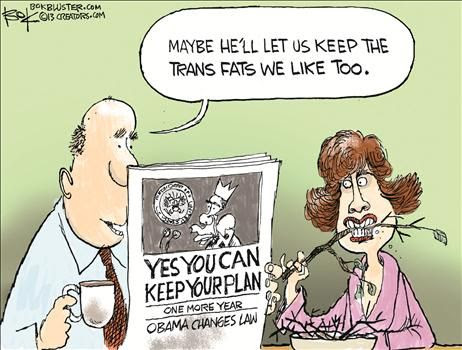 It is a condition of my admission to this great land that I am not allowed to foment the overthrow of the United States government. Oh, I signed it airily enough, but you’d be surprised, as the years go by, how often the urge to foment starts to rise in one’s gullet. Fortunately, at least as far as constitutional government goes, the president of the United States is doing a grand job of overthrowing it all by himself.

On Thursday, he passed a new law at a press conference. George III never did that. But, having ordered America’s insurance companies to comply with Obamacare, the president announced that he is now ordering them not to comply with Obamacare. The legislative branch (as it’s still quaintly known) passed a law purporting to grandfather your existing health plan. The regulatory bureaucracy then interpreted the law so as to un-grandfather your health plan. So His Most Excellent Majesty has commanded that your health plan be de-un-grandfathered. That seems likely to work. The insurance industry had three years to prepare for the introduction of Obamacare. Now the King has given them six weeks to de-introduce Obamacare.

“I wonder if he has the legal authority to do this,” mused former Vermont governor Howard Dean. But he’s obviously some kind of right-wing wacko. Later that day, anxious to help him out, Congress offered to “pass” a “law” allowing people to keep their health plans. The same president who had unilaterally commanded that people be allowed to keep their health plans indignantly threatened to veto any such law to that effect: It only counts if he does it — geddit? As his court eunuchs at the Associated Press obligingly put it: “Obama Will Allow Old Plans.” It’s Barry’s world; we just live in it.

The reason for the benign Sovereign’s exercise of the Royal Prerogative is that millions of his subjects — or “folks,” as he prefers to call us, no fewer than 27 times during his press conference — have had their lives upended by Obamacare. Your traditional hard-core statist, surveying the mountain of human wreckage he has wrought, usually says, “Well, you can’t make an omelet without breaking a few eggs.” But Obama is the first to order that his omelet be unscrambled and the eggs put back in their original shells. Is this even doable? No. That’s the point. When it doesn’t work, he’ll be able to give another press conference blaming the insurance companies, or the state commissioners, or George W. Bush . . .

The most telling line, the one that encapsulates the gulf between the boundless fantasies of the faculty-lounge utopian and the messiness of reality, was this: “What we’re also discovering is that insurance is complicated to buy.” Gee, thanks for sharing, genius. Maybe you should have thought of that before you governmentalized one-sixth of the economy. By “we,” the president means “I.”
Out here in the ruder provinces of his decrepit realm, we “folks” are well aware of how complicated insurance is. What isn’t complicated in the Sultanate of Sclerosis? But, as with so many other things, Obama always gives the vague impression that routine features of humdrum human existence are entirely alien to him. Marie Antoinette, informed that the peasantry could no longer afford bread, is alleged to have responded, “Let them eat cake.” There is no evidence these words ever passed her lips, but certainly no one ever accused her of saying, “If you like your cake, you can keep your cake,” and then having to walk it back with “What we’re also discovering is that cake is complicated to buy.” That contribution to the annals of monarchical unworldliness had to await the reign of Queen Barry Antoinette, whose powdered wig seems to have slipped over his eyes.

Still, as historian Michael Beschloss pronounced the day after his election, he’s “probably the smartest guy ever to become president.” Naturally, Obama shares this assessment. As he assured us five years ago, “I know more about policies on any particular issue than my policy directors.” Well, apart from his signature health-care policy. That’s a mystery to him. “I was not informed directly that the website would not be working,” he told us. The buck stops with something called “the executive branch,” which is apparently nothing to do with him. As evidence that he was entirely out of the loop, he offered this:

Had I been I informed, I wouldn’t be going out saying, “Boy, this is going to be great.” You know, I’m accused of a lot of things, but I don’t think I’m stupid enough to go around saying, “This is going to be like shopping on Amazon or Travelocity,” a week before the website opens, if I thought that it wasn’t going to work.

Michael Beschloss is right: This is what it means to be smart in a neo-monarchical America. Obama spake, and it shall be so. And, if it turns out not to be so, why pick on him? He talks a good Royal Proclamation; why get hung up on details?

Until October 1, Obama had never done anything — not run a gas station, or a doughnut stand — other than let himself be wafted onward and upward to the next do-nothing gig. Even in his first term, he didn’t really do: Starting with the 2009 trillion-dollar stimulus, he ran a money-no-object government that was all money and no objects; he spent and spent, and left no trace. Some things he massively expanded (food stamps, Social Security disability) and other things he massively diminished (effective foreign policy), but all were, so to speak, preexisting conditions. Obamacare is the first thing Obama has actually done, and, if you’re the person it’s being done to, it’s not pretty.

The president promised to “fundamentally transform” America. Certainly, other men have succeeded in transforming settled, free societies: Pierre Trudeau did in Canada four decades ago, and so, in post-war Britain, did the less charismatic Clement Attlee. And, if you subscribe to their particular philosophy, their transformations were effected very efficiently. But Obama is an incompetent, so “fundamentally transformed” is a euphemism for “wrecked beyond repair.” As a socialist, he makes a good socialite.

But on he staggers, with a wave of his scepter, delaying this, staying that, exempting the other, according to his regal whim and internal polling. The omniscient beneficent Sovereign will now graciously “allow” us “folks” to keep all those junk plans from bad-apple insurers. Yet even the wisest King cannot reign forever, and what will happen decades down the road were someone less benign — perhaps even (shudder) a Republican — to ascend the throne and wield these mighty powers?

— Mark Steyn, a National Review columnist, is the author of After America: Get Ready for Armageddon. © 2013 Mark Steyn
Posted by jtf at 7:39 AM