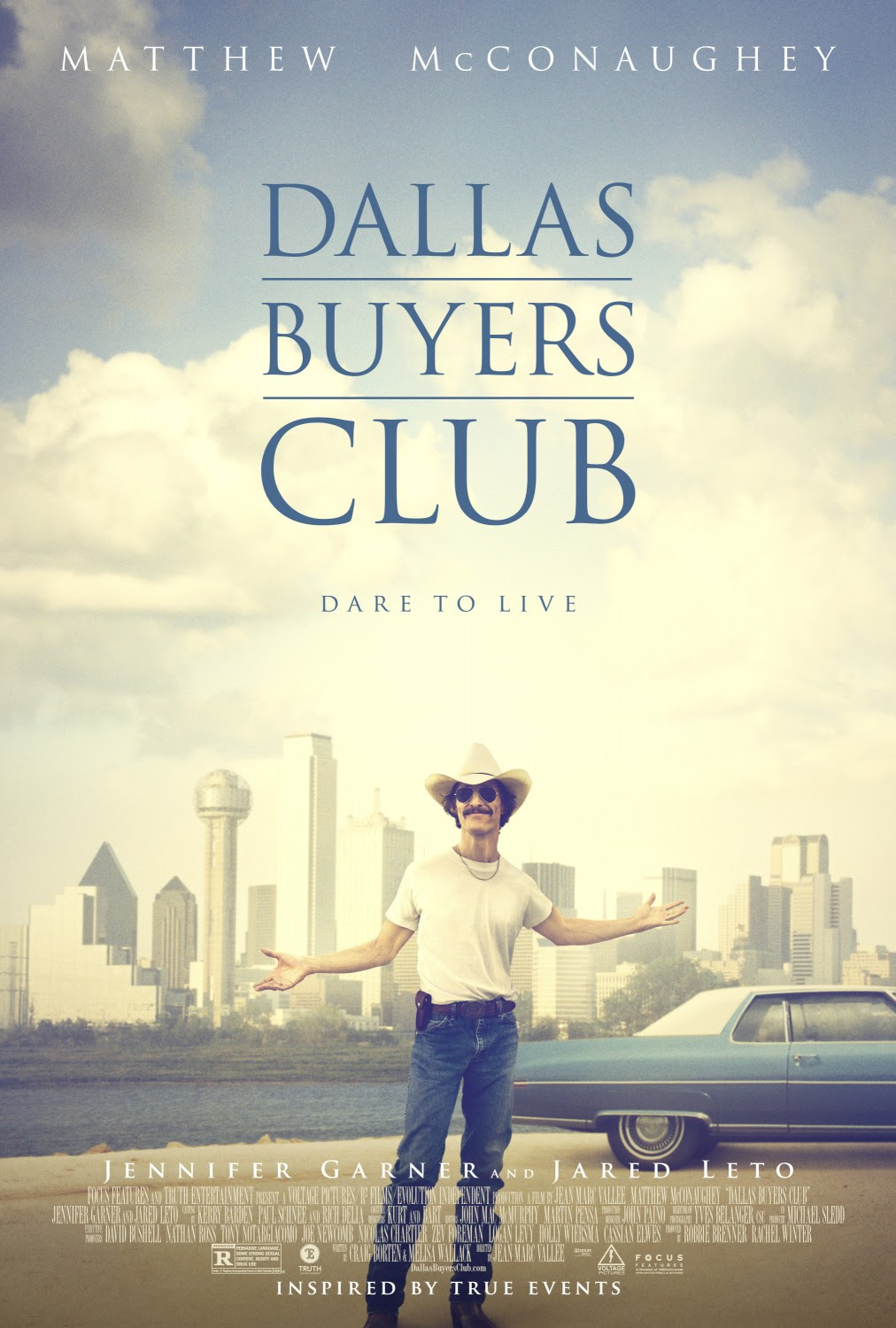 By Ann Hornaday, E-mail the writer

http://www.washingtonpost.com
There was a time, not so very long ago, when Matthew McConaughey was on the verge of becoming a punch line, if not a cautionary tale, an erstwhile new-thing-on-the-block who squandered early hype and promise on naked escapades involving bongo drums and ill-advised romantic comedies. The actor who turned heads in a scene-stealing cameo in “Dazed and Confused” then succumbed to pathologically publicity-savvy packaging in his “serious” screen debut in “A Time to Kill” had somehow wound up making “Ghosts of Girlfriends Past.”
A couple of years ago, though, McConaughey regained his footing, returning to the very instincts — part old-soul, part gonzo — that got him to the big show in the first place. With films like “The Lincoln Lawyer” (see it if you haven’t), “Bernie,” “Killer Joe,” “Magic Mike,” “The Paperboy” and this year’s sublime coming-of-age drama “Mud,” McConaughey claimed his rightful place in America’s dark heart, a snaky, sinewy shape-shifter whose anti-heroics, even at their sleaziest, possessed an almost pastoral purity and innocence.
McConaughey has doubled down on the persona in “Dallas Buyers Club,” an alternately wrenching and exuberant fact-based drama for which he famously shed nearly 40 pounds to play an emaciated HIV patient. As Texas electrician Ron Woodroof, McConaughey delivers the performance of his career, characterized not just by an astonishing physical transformation but by a wellspring of deep compassion and fearlessness. Together with co-star Jared Leto — whose facial and corporeal transformation is every bit as startling — McConaughey personifies the kind of blazing, all-in commitment that defines screen acting at its simplest and its best.
From its very first scene, “Dallas Buyers Club” announces what kind of tough, even tawdry world it intends to inhabit: At a rodeo where cowboys are hurled into the ground like yard darts, Woodroof embarks on a wild, panting assignation of his own in the form of a furtive sexual encounter with two women in a stall just outside the ring. The year is 1985, and the gaunt, stringy Woodroof is leading the life of a large-livin’ good old boy whose drinking, gambling and hard partying eventually catch up with him in the form of a flu he can’t shake.
Except it isn’t flu, and the scene in which Woodroof learns from physician Eve Saks (Jennifer Garner) that he has contracted the AIDS virus is just the first of several in which McConaughey exhibits uncanny powers of expression, spontaneity, control and restraint. “Dallas Buyers Club” is nominally about Woodroof’s simultaneous efforts to overcome social stigma and buck the medical establishment and bring non-FDA approved treatments to desperate patients. But really the movie is about choices, in this case a protagonist’s unspoken evolution from homophobia to a begrudging, vaguely haunted humanism; an actor’s decision not to compulsively seek the audience’s love and approval; and a filmmaker’s decision to keep what might have become a saccharine parable of uplift on a harder, riskier edge.
Director Jean-Marc Vallée keeps “Dallas Buyers Club” real by rejecting high gloss in favor of a more spare, stripped-down visual style; reportedly he used only natural light to film, which keeps the often seedy subculture that Woodroof inhabits from becoming too cozy. But if that world — of trailer-park orgies and cheap motels, drug addicts and hookers — isn’t all sweetness and light, it isn’t devoid of heart. The soft, vulnerable soul of “Dallas Buyers Club” is a transsexual named Rayon (Leto), a misfit and fellow AIDS patient whom Woodroof initially spurns but who eventually becomes his business partner.
As a rousing, reality-inspired tale of someone sticking it to The Man, as well as a sober social history and sentimental chronicle of unlikely friendship and love, “Dallas Buyers Club” could have gone wrong in myriad ways, most of them having to do either with overkill or pompous self-seriousness. But Vallée, working with a lean, lively script by Craig Borten and Melisa Wallack, neatly avoids excess, letting Woodroof’s terrific yarn stand on its own and getting out of the way of his extraordinary actors, who channel the story without condescension or manipulative cheats. McConaughey and Leto may have the showiest roles, but Garner deserves equal praise for her sensitive, straightforward performance.
“Dallas Buyers Club” never allows viewers to forget that it’s taking place within an epidemic of staggeringly tragic proportions. But neither does it allow that grievous context to negate the energy and sheer entertainment value of Woodroof’s gutsy journey across the high wire between certain death, survival and redemption. Thanks to a wily coyote of a protagonist — and the actor who has made such characters such gratifying cinematic figures of late — “Dallas Buyers Club” turns the facts of a life into deeply grounded emotional truth. McConaughey hasn’t just become the devil we know. He’s become the one we love.
★ ★ ★ ★
R. At area theaters. Contains pervasive profanity, some strong sexual content, nudity and drug use. 117 minutes.

The Price of Redemption: Matthew McConaughey Goes the Distance in Dallas Buyers Club 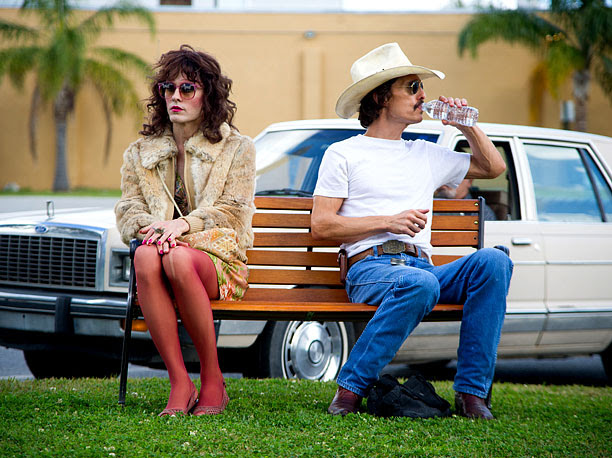 Matthew McConaughey, a mumbling Hollywood-honed Texas actor with a severely limited range whom I have never much liked on the screen, goes the distance at last and wins the crown. In Dallas Buyers Club, the cocky, preening, mewling drawl that whistles through his teeth in every film works in his favor to present a perfect picture of reluctant real-life hero Ron Woodroof, the hateful, brawling, womanizing, homophobic Dallas electrician and redneck rodeo cowboy who turned out to be one of the accidental saviors of gay men during the height of the AIDS crisis in the 1980s. It’s a true story, turned with precision and care into one of the most riveting and inspiring films of the year.

In 1985, Ron Woodroof was clueless about AIDS. He was a brawling, drunken, chain-smoking, drug-dealing, foul-mouthed bigot with no concern for the sick and disenfranchised of the world and scarcely little more for his own health. (In fact, the first scene shows him in a cocaine-hazed three-way with two trashy whores in a rodeo holding pen; it gets raunchier from there.) When a minor work accident lands him in the hospital, the doctors discover he has HIV and a near-fatally low blood count of 9 T-cells. He goes viral, reacting with his fists. But when his lady doctor (Jennifer Garner) predicts he has about 90 days to live, he starts reviewing his options. Unwilling to participate in clinical trials aimed at homosexuals and forced to settle for limited doses of the toxic government-approved experimental drug AZT, he bribes a hospital orderly, then crosses the border into Mexico to investigate alternative treatments. First thinking only of his own selfish needs, extending the drug smuggling business to other unfortunates in need of illegal medications looks like a good investment. As his immune system plummets and he develops pneumonia, the only meds that help are not approved by the FDA, so he imports them, disguised as a priest. Pretty soon, to his horror, he finds himself going into business, with a desperate gay community as his clientele and a flamboyant drug-addicted transsexual named Rayon (an amazing Jared Leto) as his business partner, traveling to Amsterdam, Japan and Israel to buy the newest advances in AIDS drugs. Together, this unspeakably mismatched odd couple establishes a Dallas buyers club made up of HIV-infected members who pay a $400 monthly fee for the latest treatments unapproved by the FDA. As a 30-day death sentence stretches into seven years of prolonged life, Ron Woodroof learns what it feels like to be rejected and shunned by his own fellow roughnecks and becomes a leading authority on AIDS with an encyclopedic knowledge of the pandemic, fighting the pharmaceutical companies, the AMA, FDA, CIA and IRS in court for dignity, education and human rights. It’s the story of a lout who finds redemption through unexpected motivation, becoming an accidental activist in the process and learning a valuable lesson in humanity about how to help others after it’s too late to help himself.

Losing 50 pounds for the role, Mr. McConaughey looks like a cadaver as he more than gives his all for his art. His shocking weight loss is the first thing you’ll notice, but he grows on you in sensitivity and stature. Jennifer Garner is fine as the sympathetic doctor who risks her own career to help him. But it is Jared Leto—fearless, funny, openhearted, sympathetic and totally believable as the transsexual who opens Woodroof’s eyes to people and lifestyles he cannot begin to understand—who literally steals the picture. What a performance from an actor who grows in stature every time out of the starting gate. Meticulously researched by writers Craig Borten and Melisa Wallack (the actual Ron Woodroof was a consultant, contributing hours of taped interviews before he died in 1992) and directed by Canadian Jean-Marc Vallée (Young Victoria) with a refreshing, no-nonsense lack of sentiment, Dallas Buyers Club represents the best of what independent film on a limited budget can achieve—powerful, enlightening and not to be missed.