As broken promises pile up — “Lower rates for all!” — the Left rolls out new sales pitches. 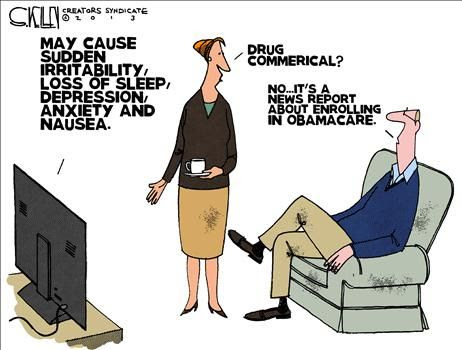 Don’t look now, but as Obamacare’s critics are focusing incessantly on the abortive rollout of the law’s health-care exchanges, the Left is moving the goalposts in the broader debate — and rather spectacularly, too.

Obamacare, recall, was sold with a specific set of political promises: The new regime, advocates insisted, would reduce the deficit, cover the needy, and reduce total health spending — all while lowering the premiums of those who were already insured. Back in 2007, when Obama was running for the Democratic nomination, he introduced what was then an embryonic proposal with the quixotic assurance that, “if you already have health insurance, the only thing that will change for you under this plan is the amount of money you will spend on premiums.” Then he adumbrated what would happen to the “amount of money” that Americans would “spend on premiums.” “That will be less,” Obama told anybody who would listen.

In case you’re wondering, that’s “less” in the classical sense of the word, as opposed to in the sense of “more,” or “well, that depends on who you are.” Likewise, just so we’re painfully clear: When the president said that he was talking about people who “already have health insurance,” he meant that he was talking about people who already had health insurance. This is not a matter of opinion or a subjective piece of literary criticism. It is a fact. In plain language that the speaker intended listeners to take at face value, Obama established a hypothesis — one that can be tested rather easily. He must be held to it.

As a candidate, Obama also made this promise: “I will sign a universal health-care bill into law by the end of my first term as president that will cover every American and cut the cost of a typical family’s premium by up to $2,500 a year.” Again, this is not a “right-wing talking point,” nor is it a slur cooked up by an intransigent conservative movement intent upon destroying the president at all costs. It is a verbatim pledge that the candidate made to the American people on camera over and over and over and over again — so often, in fact, that the New York Times ran an entire feature on the “audacious promise” that was submitted in “speech after speech.”

After he was elected president, Obama continued to make definite commitments. On June 15, 2009, in the midst of the legislative fight, the president told the American Medical Association’s annual meeting: “If you like your doctor, you will be able to keep your doctor. Period. If you like your health-care plan, you will be able to keep your health-care plan. Period. No one will take it away. No matter what.”

These declarations cannot merely be dismissed as heat-of-the-moment talking points rendered moot by changes made during the deliberative process. Instead, they are claims that were — and that remain — central to the public case for the law. As recently as July 2012, Nancy Pelosi informed the viewers of Meet the Press that, under Obamacare, “everybody will have lower rates, better quality care, and better access.” One month later, the president took to the Rose Garden lawn to issue another guarantee: “For people with insurance, the only impact of the health-care law is that their insurance is stronger, better, and more secure than it was before. Full stop. That’s it. They don’t have to worry about anything else.”

To recap, then: Before, during, and after passage, Americans were promised that Obamacare was going to lower premiums for “everyone” (the goal of merely maintaining premiums being too modest); it was not going to interfere with anybody’s health care or health insurance if they already had it; and it was not going change anybody’s patient-doctor relationship. The message was unmistakable: All the government wanted to do was extend health insurance to people who didn’t have it. This wouldn’t affect you. No need to worry. Period. Move along.

What was not claimed was that Obamacare was necessary because health care is a “right,” as the president has recently taken to arguing; that redistribution was critical for “fairness”; or that some would win and some would lose but that, overall, it would be a solid compromise. Instead, unmistakable promises, easy enough to check in the age of the Internet, were repeatedly made by the architects and cheerleaders of reform.

In the meantime, Obama’s many apologists in the Washington press corps have switched emphasis. Ezra Klein, a consistently dishonest and credulous proponent of the law, explainedbluntly in the Washington Post in June of this year why some people will have to pay more for their insurance under the new regime:

Klein is almost certainly right here — although it would have been nice if he’d thought to mention this when the damn thing was being debated. Nevertheless, he is making a completely different argument from the one upon which the president has routinely relied. So, too, has The New Republic’s Nate Cohn, who noted in the summer that:


Under Obamacare, premiums for some people are bound to go up, because the law requires insurers to cover people they presently turn away for pre-existing conditions — and to provide the kind of comprehensive benefits insurers frequently don’t offer when selling to people on an individual basis.

New York’s Jonathan Chait, meanwhile, chimed in with the rather amazing claim that “it is true — and nobody has ever denied this — that the hypothetical 25-year-old male will pay higher insurance premiums under Obamacare,” and then proceeded to explain that this was a net positive because, over the course of one’s life, the benefits one would reap from the system would outweigh the losses. Chait is, of course, entirely within his rights to argue this. But, again, he is making a argument that is dramatically at odds with the one that Obama used to sell the law. Unless we are to conclude that words mean nothing in contemporary politics, this is a disaster.

Some alert and enterprising types have noticed that what was promised has not in fact come to pass. Republican House whip, Kevin McCarthy, has taken to reminding audiences that “when we started this health-care debate, the president led with a very big promise to the American people: If you like the health care that you have, that you currently have, you can keep it.” The Associated Press, coming better late than never to the world of fact-checking, observed in September: “McCarthy is correct, Obama said exactly that. It was an empty promise, made repeatedly.”

Citizens in the Bay Area have noticed, too. In a piece called “Obamacare’s winners and loser in Bay Area,” the San Jose Mercury News took a look at who was suffering under the new rules. Among the losers are Cindy Vinson and Tom Waschura, both of whom back the president:

Vinson, of San Jose, will pay $1,800 more a year for an individual policy, while Waschura, of Portola Valley, will cough up almost $10,000 more for insurance for his family of four.

The pair’s reactions are instructive. “Of course, I want people to have health care,” Vinson told the newspaper. “I just didn’t realize I would be the one who was going to pay for it personally.” Waschura was similarly surprised. “I was laughing at Boehner,” he said, “until the mail came today.”

Hearing stories like this, it is tempting for conservatives to say, “I told you so.” Indeed many have. But one does have to feel a little sorry for the duo. After all, they have heard incessantly from their ideological fellow-travelers the oft-repeated claim that this wasn’t going to happen. There weren’t supposed to be winners and losers; instead, they were advised by fellow Californian Nancy Pelosi that “everybody will have lower rates, better quality care, and better access,” and by President Obama that “for those who have insurance now, nothing will change under the Obama plan — except that you will pay less.” What were trusting citizens supposed to conclude?

Looking back, it is amazing that Obama wasn’t laughed off the stage at the outset. His central claim — that premiums would drop for the typical family by $2,500 — could literally have been taken from the back of an envelope. As the New York Times explained back in 2008, the $2,500 number came from economist David Cutler, who predicted that Obamacare would reduce all health-care spending by $200 billion a year. Candidate Obama, looking for a good sound bite, simply divided this number by the number of families in the United States; then, calculating inexplicably that total health-care spending and family health-insurance premiums were exactly the same thing, he concluded that all money saved would be returned to the people. That Obama considered this a reasonable way of selling a plan that reorganized one-sixth of the economy betrays either a fundamental economic illiteracy or a deeply troubling readiness to mislead.

At the beginning of his big health-care speech in Maryland yesterday, the president told the crowd that, as regards the “reforms that we are making to our health-care system,” “there’s been a lot of things said, a lot of misinformation, a lot of confusion.” He is right, of course. The debate has been mired in dishonesty and casuistry from the very start. And nobody has contributed to this with more enthusiasm and with a louder megaphone than Barack Obama himself.

— Charles C. W. Cooke is a staff writer for National Review.
Posted by jtf at 6:29 AM