Democrats want 2014 to be an us-versus-them election. 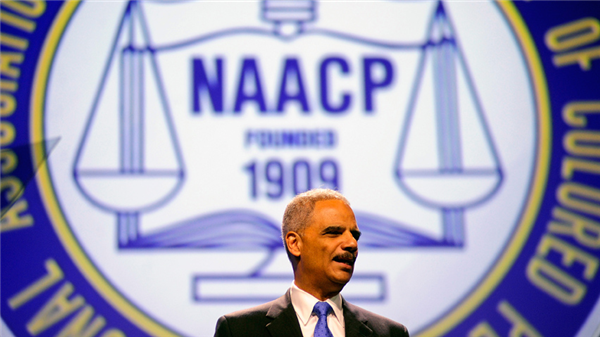 The first thing to remember is that, with the Obama administration, there are no coincidences.

The attorney general of the United States is engaged in a shocking extrajudicial publicity campaign. Eric Holder is prosecuting George Zimmerman in the court of public opinion because he knows he wouldn’t have a prayer of convicting him in a court of law. Worse, in doing so, Holder is quite deliberately stoking resentment and tension — under the guise of leading a “national conversation” about race.

At precisely the same time, the United States secretary of health and human services has loathsomely injected race into the debate over Obamacare. Toward the conclusion of this week’s NAACP grievance fest, Kathleen Sebelius took the podium to demagogue Obamacare opponents. The fight against them, she inveighed, is reminiscent of “the fight against lynching and the fight for desegregation.” She made these inflammatory remarks just as violence was erupting over Zimmerman’s acquittal in the Trayvon Martin shooting, no small thanks to Holder’s accomplice, Al Sharpton.

These episodes are not unrelated. They are coordinated.

The second thing to bear in mind is that race-baiting is the last resort of scoundrels whose insipid policy claims cannot survive collision with real-world conditions. The incitements that transform policy debates into an us-versus-them rumble are not about race per se. They are about advancing a hard-left agenda through the community organizer’s crude bag of tricks — the extortion that Alinskyites euphemistically call “direct action.” It is what happens when social-justice prescriptions turn out to be unjust and unworkable.

Sebelius is not agitating because she actually believes there is some faint connection between Jim Crow and opposition to socialized medicine. Sensing that no one was looking as the country kicked back for an extended Independence Day weekend, the president’s Myrmidons conceded that Obamacare is collapsing of its own fiscally reckless weight. Alinskyites are about power. Obama realizes he won’t have much left if Democrats are yoked to a smoldering train wreck in advance of the 2014 midterms. So he is struggling to keep it a looming train wreck. A third-string Treasury bureaucrat was thus dispatched to announce, in passing, that Obama has “waived” the employer mandate until 2015.

Quite apart from the lawless imperiousness of this maneuver, it is not going to work. Not being well acquainted with the private sector, the president may not realize that, for corporate executives, planning ahead means more than scheduling the next tee time. As National Review’s editors have observed, Obamacare has already “complicated business decisions touching on everything from long-term investments to hiring to the number of hours worked by part-time employees.” It is, right now, a ball and chain around the ankle of a high-unemployment, no-growth economy.

Even if Obama gets his way — such that only the employer mandate is delayed, with Republicans unable to shame Senate Democrats into putting off the equally noxious individual mandate — the calendar is not in his favor. The administration cannot allow 2014 to be an election about policy. It has to be an us-versus-them election, with the “us” enjoying the “animated by rage” advantage. What we saw from Holder and Sebelius this week is the ugly start of a wickedly divisive enterprise.

The rule of law demands that criminal statutes be applied faithfully and that law-enforcement officials respect due process by conducting their investigations in silence, speaking publicly only when they are prepared to file charges they can prove in court. Yet Holder and his Department of Social Justice have publicly and unethically agitated against George Zimmerman for over a year: partnering with Sharpton, saber-rattling about a federal civil-rights prosecution, and browbeating Florida officials into charging Zimmerman with murder despite evidence woefully insufficient to meet the statute’s terms.

Now, Holder is ensnared in this web of his own making. The state prosecution predictably failed, and it turns out there has never been a plausible civil-rights prosecution. Holder can commission all the bizarre anti-Zimmerman “tip lines” he likes; it won’t fill the cavernous holes in his case.

Obviously, he knows this. But he has also dramatically raised the expectations of Obama’s hard-left base — and note that the anti-Zimmerman protests are being driven at least as much by Occupy types and outfits such as the Party for Socialism and Liberation as by anguished supporters of the Martin family. After all the attorney general’s bold talk, they want to know where the civil-rights indictment is. Holder’s stall is that he is “investigating,” but Trayvon Martin was killed nearly a year and a half ago. How long does it take to investigate a comparatively straightforward altercation about which Florida has already completed a full-blown trial and the FBI has already conducted exhaustive interviews?

So in his NAACP stem-winder, Holder refocused the community organizer’s lens from civil-rights laws to “stand your ground” (SYG) laws. You are to believe that, while he’d love to charge that civil-rights case, he is being frustrated — justice is being frustrated — by these self-defense provisions that “sow dangerous conflict in our neighborhoods.” According to Holder, justice for Trayvon mandates that SYG be repealed. Effectively, the attorney general would surrender the streets to criminal aggressors by imposing a “duty to retreat” on law-abiding citizens.

SYG has become the proxy for the case the Left can’t win. The game is given away by Holder’s race-mongering echo chamber. Pressed by Fox’s Bill O’Reilly, radio commentator Tavis Smiley admitted that Zimmerman’s trial had been consistent with Florida law. But, he groused, “it’s the law I have a problem with.” Taking Holder’s bloviating to its illogical end, Smiley explained that Florida law gave Zimmerman a “right to stand his ground” but insidiously deprived Martin of this same right because our nation generally views black men “as a menace to society.”

Please. Martin did not just “stand his ground” when Zimmerman followed him; he initiated the fateful physical confrontation by attacking Zimmerman and brutally beating him. But the point is that Zimmerman’s right to stand his ground was utterly irrelevant to the case. Its newfangled pertinence is a fabrication of the Left. The Monday-morning quarterbacks now claim that SYG has seeped into all Florida law; thus, it was dispositive in the deliberations that led to Zimmerman’s acquittal.

In truth, Zimmerman did not claim the immunity of SYG because SYG matters only when there is an opportunity to retreat. If you are lying on the ground being pulverized, the fact that you’d have a right to stand your ground in the unlikely event you could get to your feet is beside the point.

The legacy media, which is joining the racialized campaign against SYG just as it joined the racialized campaign to charge Zimmerman, is quick to point out that a juror, in a CNN interview, mentioned SYG as a factor in the jury’s consideration. What they don’t tell you, though, is that it was the blunderbuss prosecutors, not Zimmerman’s lawyers, who injected SYG into the trial testimony.

Zimmerman did not ask for the pretrial hearing to which a person claiming SYG immunity is entitled. It was the prosecutors, in their desperation to come up with some modicum of evidence that Zimmerman intended to commit murder, who adduced testimony that he had taken a criminal-justice course that covered SYG laws. The suggestion, if you can follow this, was that maybe the shooting was sort of premeditated. (If you took addition in the first grade, you’d better not bounce a check in Florida — who knows what they’ll charge you with?)

Nevertheless, Zimmerman’s lawyers posited a classic self-defense strategy, under the standards that existed long before SYG was enacted in Florida. SYG had nothing to do with Trayvon Martin’s death.

Nothing more, that is, than opposition to Obamacare has to do with segregation. But logic won’t stop the bloody shirt of racial politics from being waved in dutiful pursuit of the Left’s dream world. It’s a world where you’d better hope everyone has “free” health care. With your right to self-defense stripped away, it won’t do you much good that the state’s police are nowhere in sight when you find yourself besieged . . . and with no better chance to retreat than George Zimmerman had.

— Andrew C. McCarthy is a senior fellow at the National Review Institute. He is the author, most recently, of Spring Fever: The Illusion of Islamic Democracy.
Posted by jtf at 9:11 PM