Get Ready for the All-Hail-Hillary Movies

In the run-up to 2016, Hollywood plans to turn out “evenhanded” biopics. Sure. 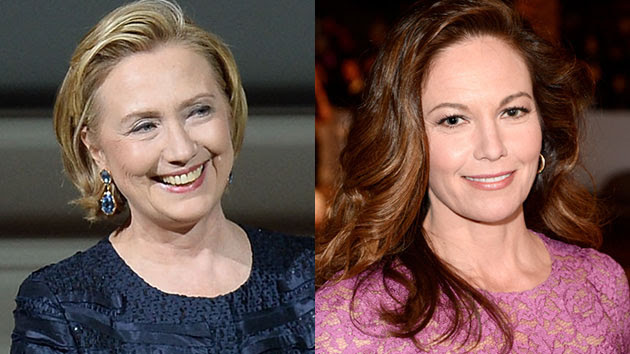 I wasn’t surprised to learn that sometime before the 2016 election, NBC will be releasing a four-hour miniseries about Hillary Clinton starring Academy Award nominee Diane Lane. What did surprise me was that the series will cover none of her life before the Monica Lewinsky scandal, which took place five years into her husband’s second term as president and when Hillary was already 51 years old. It’s as if her first half-century will be airbrushed away, along with the many scandals that dogged her in those decades.

While the series will still have a lot of ground to cover — impeachment and the “vast right-wing conspiracy” she suspected, her successful 2000 Senate race, her loss to Barack Obama in the 2008 primaries, her time as secretary of state and her role in the Benghazi debacle — it’s striking that so much rich material will be excluded even before footage is discarded on the cutting-room floor.

Just consider what we’ll be missing.

Health-Care Gate: In 1997, federal judge Royce Lamberth levied $286,000 in sanctions against Bill Clinton’s administration for “running amok” in a “cover-up” of Hillary Clinton’s health-care task force. The scandal began when deputy White House counsel Vincent Foster made contradictory assertions about the first lady’s job status, in an attempt to keep the work of the task force secret. Foster later committed suicide, and a Secret Service agent saw Hillary Clinton’s chief of staff, Margaret Williams, carry boxes of papers out of Foster’s office before investigators showed up to seal it.

A report by the special prosecutor’s office concluded that Foster had been suffering from clinical depression and “was involved in work related to a number of important and difficult issues,” including controversial appointments and “litigation related to the Health Care Task Force; the dismissal of White House Travel Office employees and the ensuing fallout from that incident; the Clintons’ tax returns (which involved an issue regarding treatment of the Clintons’ 1992 sale of their interest in Whitewater); the Clintons’ blind trust; liaison with the White House Usher’s office over issues related to the White House Residence; and issues related to the Freedom of Information Act.” The first lady was involved in all of these controversies.

Filegate: The confidential FBI files of up to 900 former Reagan and Bush appointees were sent over to White House security chief Craig Livingstone. Deputy White House counsel William Kennedy, a close friend of Hillary Clinton’s from their days at the Rose Law Firm, would frequently call up the FBI and have someone’s files sent over on his say-so. Then–FBI director Louis Freeh called it “an egregious violation of privacy.”

Cattle-Futures Gate: Hillary Clinton came under scrutiny when, during her tenure as first lady of Arkansas, she managed to turn a $1,000 investment in cattle futures into a profit of nearly $100,000 in only nine months. She claimed she had learned how to trade by reading the Wall Street Journal. Her broker had earlier been suspended from trading for a year after he was charged with manipulating the egg-futures market.

Travelgate: In May 1993, Hillary Clinton wrote an infamous note demanding action to “get our people” into the White House Travel Office. Billy Dale, its director, and six of his employees were quickly fired on the basis of rumors that they had engaged in criminal conduct; the rumors were cooked up in part by a 25-year-old cousin of Bill Clinton’s who wound up running the travel office.

Dale was indicted on charges of embezzling $88,000 from the office. Jurors took only two hours to acquit him of all charges. Hillary Clinton refused an interview request from the General Accounting Office about her role in the affair. The late New York Times columnist Bill Safire concluded after Travelgate that Hillary Clinton was “a congenital liar.”

Whitewater Gate: The tangled web of Bill and Hillary Clinton’s Whitewater real-estate dealings in Arkansas prompted Attorney General Janet Reno to appoint a special prosecutor to investigate. Jim McDougal, a Clinton business partner who went to jail over Whitewater, famously described the Clintons as “sort of like tornadoes moving through people’s lives.”

First led by Robert Fiske, then by Ken Starr, the special prosecutor’s office was deeply disturbed by the lack of candor from the Clintons when they were deposed under oath. Hickman Ewing, Starr’s deputy, testified in court that after he heard Hillary Clinton say “I don’t recall” some 50 times in one deposition, he gave her an F grade for her truthfulness.
Billing-Records Gate: The records of Hillary Clinton’s clients at the Rose Law Firm in Arkansas were subpoenaed for years by investigators looking into Whitewater. They were finally discovered on a coffee table in the private quarters of the White House. No one ever explained how they got there.
All this juicy drama will remain off the table in the miniseries, but the website Indiewire.com reports that NBC executive Robert Greenblatt is promising skeptics the biopic will be “even-handed in terms of criticism and praise when it comes to dealing with Clinton and her work.” Speaking of Hillary’s response to the film, Greenblatt told reporters, “I don’t think she will endorse it.”

Despite such reassurance, if this biopic achieves balance, it will only be by overcoming the prejudices of its screenwriter, Courtney Hunt, who is known in Hollywood as an admirer of Hillary Clinton’s. Andrew Sarris of the New York Observer praised Hunt’s first feature film, Frozen Assets, as “one of the strongest feminist statements I have seen onscreen.” Hunt told the Huffington Post that when it comes to women’s rights, “I feel that everything after 1979 has been going backwards.” Ronald Reagan was first elected president in 1980.

NBC isn’t the only entertainment entity making a Hillary film in the run-up to the next presidential election. Director James Ponsoldt plans to release Rodham in 2016. It will focus on her early years with Bill Clinton and her tenure as a 27-year-old junior counsel on the House Judiciary Committee when President Nixon was impeached. Actresses Scarlett Johansson, Reese Witherspoon, and Amanda Seyfried are all front-runners for the role. “You don’t find people who question the quality of her intelligence or her drive,” Ponsoldt says. “I want a wonderful actress who could embody that.” Somehow I don’t think the script will require an actress to embody other, perhaps less appealing, aspects of Hillary Clinton’s modus operandi.

In March 2008, as Hillary Clinton was running for president, Jerry Zeifman — the chief counsel to the House Judiciary Committee at the time of Nixon’s impeachment and a lifelong Democrat — expressed his profound disappointment with her work on the committee. Among her transgressions were lying, removing files from the committee offices without permission, and arguing that Nixon shouldn’t be allowed any legal counsel before the committee. “I terminated her employment on the Nixon impeachment staff,” he told me. “My only regret was I had not reported her unethical practices to the appropriate bar associations. I could not recommend her for any subsequent position of public or private trust.”

People who have seen the draft for Rodham say that the script skips over any mention of the controversy that surrounded the future Mrs. Clinton’s time on the impeachment committee. On that, I am not surprised at all.

— John Fund is national-affairs columnist for NRO.
Posted by jtf at 5:43 AM