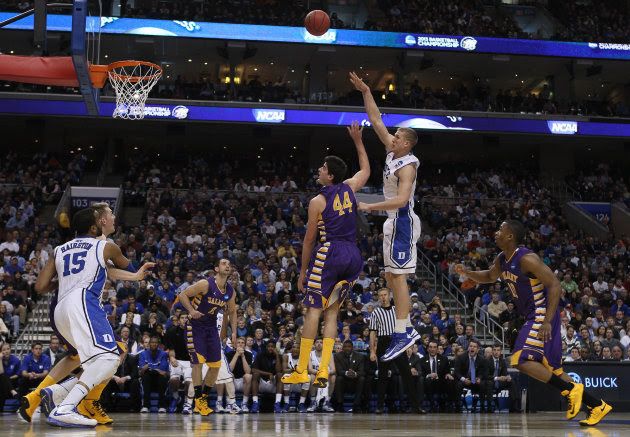 You read this
PHILADELPHIA – The sky hook is suddenly back in style, and every team in Duke's path to Atlanta should be afraid.

Blue Devil center Mason Plumlee is tough enough to defend, with his muscular 6-10 frame and his quick feet, but on Friday in Duke's 73-61 second-round win over Albany, it looked like he mastered arguably the most indefensible shot in hoops history.
"Plumlee did the best Kareem Abdul Jabbar imitation I've seen in a long time," said Albany coach Will Brown. "He hit three sky hooks. I haven't even seen somebody attempt that shot in my 12 years at Albany, and he hit three of them."
Plumlee scored 23 points Friday, mostly on dunks and layups, yet it was his bit part as Captain Hook that turned the most heads here. Plumlee's version is a running hook, where he scoots across the lane, leaps and lets it go. It's certainly a tricky shot, yet when he has a handle on it, well … 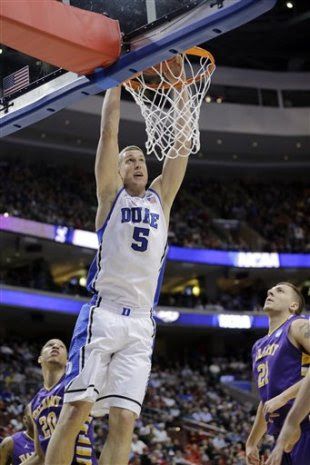 Mason Plumlee scored 23 in Duke's win over Albany (AP)"His running hook, when he hits that, it's impossible to defend," said Albany center Blake Metcalf. "There's nothing you can do."
Metcalf has played against Plumlee since their AAU days, and he said the shot is something the big man didn't have in his arsenal back then. It's become familiar to Duke fans, yet most defenders have no idea what to do with it.
"It's rare," said Albany junior John Puk. "You wall him off and hope he misses."
The bigger question is, why don't we see this shot more? Abdul-Jabbar made a Hall-of-Fame career out of the sky hook, and we hardly find it anywhere in the game today. The release point is so high and far from the defender's reach that the arc to the basket is pretty much clear on every attempt. "It was the only shot I could shoot that didn't get smashed back in my face,"Abdul-Jabbar once told ESPN. "So I learned to rely on it early, and it was always something that I could get off, even in traffic."
[Related: Jeremy Lin among those excited about Harvard's NCAA tourney win]
There's no reason Plumlee can't do the same, although there's a huge difference: Abdul-Jabbar started relying on the shot in fifth grade. Plumlee only uses it on occasion.
"I like coming across the middle," Plumlee said after the game. "I don't know why people don't do it more."
Part of the challenge is athleticism. The hook shot takes footwork that most big men don't have. It requires touch that most big men don't have. And it takes body positioning that most big men don't have. Plus it can look awkward. Shaquille O'Neal once said his father made him practice the shot but he had little sustained interest. "Being a hip-hop kid," O'Neal said. "I didn't want to do it."
Plumlee seems to want to do it more. He's hardly perfected the shot – he joked that Friday's hooks were the only ones that worked all season – yet he's clearly building the confidence to take the shot and make it.
Making matters worse for future Duke opponents is the problem Plumlee poses even without the hook shot. He isn't a beast in the post, but he's developed a burgeoning game in the paint that keeps defenders honest. And that allows Duke's guards to slash to the hoop – Seth Curry had 26 points Friday – and force defenders to make a difficult choice: step out and defend or keep a body on Plumlee. That choice is getting tougher and tougher, especially with Ryan Kelly back from injury. Now Duke has a triple threat – its guards, Plumlee, and Kelly – and so the hook shot is even more of a dagger than it would otherwise be.
"Well, you have to pick your poison," Brown said. "It's hard, especially for us, to double team Plumlee. We were going to play him straight up and roll the dice. They shoot the three so well, and after watching that game against Miami where Kelly had 40, I had some bad migraines."
Tape of Plumlee's hook shot will make the headaches even more severe for Duke's upcoming opponents. He might not be the next Kareem, but he might be close enough.
Posted by jtf at 11:34 AM