How capitalism can save art

Does art have a future? Performance genres like opera, theater, music and dance are thriving all over the world, but the visual arts have been in slow decline for nearly 40 years. No major figure of profound influence has emerged in painting or sculpture since the waning of Pop Art and the birth of Minimalism in the early 1970s. 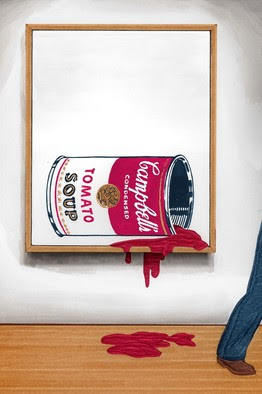 Alex Nabaum
Warhol grew up in industrial Pittsburgh. Today's college-bound rarely have direct contact with the manual trades.
Yet work of bold originality and stunning beauty continues to be done in architecture, a frankly commercial field. Outstanding examples are Frank Gehry's Guggenheim Museum Bilbao in Spain, Rem Koolhaas's CCTV headquarters in Beijing and Zaha Hadid's London Aquatic Center for the 2012 Summer Olympics.
What has sapped artistic creativity and innovation in the arts? Two major causes can be identified, one relating to an expansion of form and the other to a contraction of ideology.
Painting was the prestige genre in the fine arts from the Renaissance on. But painting was dethroned by the brash multimedia revolution of the 1960s and '70s. Permanence faded as a goal of art-making.

But there is a larger question: What do contemporary artists have to say, and to whom are they saying it? Unfortunately, too many artists have lost touch with the general audience and have retreated to an airless echo chamber. The art world, like humanities faculties, suffers from a monolithic political orthodoxy—an upper-middle-class liberalism far from the fiery antiestablishment leftism of the 1960s. (I am speaking as a libertarian Democrat who voted for Barack Obama in 2008.)
Today's blasé liberal secularism also departs from the respectful exploration of world religions that characterized the 1960s. Artists can now win attention by imitating once-risky shock gestures of sexual exhibitionism or sacrilege. This trend began over two decades ago with Andres Serrano's "Piss Christ," a photograph of a plastic crucifix in a jar of the artist's urine, and was typified more recently by Cosimo Cavallaro's "My Sweet Lord," a life-size nude statue of the crucified Christ sculpted from chocolate, intended for a street-level gallery window in Manhattan during Holy Week. However, museums and galleries would never tolerate equally satirical treatment of Judaism or Islam.
It's high time for the art world to admit that the avant-garde is dead. It was killed by my hero, Andy Warhol, who incorporated into his art all the gaudy commercial imagery of capitalism (like Campbell's soup cans) that most artists had stubbornly scorned.
The vulnerability of students and faculty alike to factitious theory about the arts is in large part due to the bourgeois drift of the last half century. Our woefully shrunken industrial base means that today's college-bound young people rarely have direct contact any longer with the manual trades, which share skills, methods and materials with artistic workmanship.
Warhol, for example, grew up in industrial Pittsburgh and borrowed the commercial process of silk-screening for his art-making at the Factory, as he called his New York studio. With the shift of manufacturing overseas, an overwhelming number of America's old factory cities and towns have lost businesses and population and are struggling to stave off disrepair. That is certainly true of my birthplace, the once-bustling upstate town of Endicott, N.Y., to which my family immigrated to work in the now-vanished shoe factories. Manual labor was both a norm and an ideal in that era, when tools, machinery and industrial supplies dominated daily life.
For the arts to revive in the U.S., young artists must be rescued from their sanitized middle-class backgrounds. We need a revalorization of the trades that would allow students to enter those fields without social prejudice (which often emanates from parents eager for the false cachet of an Ivy League sticker on the car). Among my students at art schools, for example, have been virtuoso woodworkers who were already earning income as craft furniture-makers. Artists should learn to see themselves as entrepreneurs.
Creativity is in fact flourishing untrammeled in the applied arts, above all industrial design. Over the past 20 years, I have noticed that the most flexible, dynamic, inquisitive minds among my students have been industrial design majors. Industrial designers are bracingly free of ideology and cant. The industrial designer is trained to be a clear-eyed observer of the commercial world—which, like it or not, is modern reality.
Capitalism has its weaknesses. But it is capitalism that ended the stranglehold of the hereditary aristocracies, raised the standard of living for most of the world and enabled the emancipation of women. The routine defamation of capitalism by armchair leftists in academe and the mainstream media has cut young artists and thinkers off from the authentic cultural energies of our time.
Over the past century, industrial design has steadily gained on the fine arts and has now surpassed them in cultural impact. In the age of travel and speed that began just before World War I, machines became smaller and sleeker. Streamlining, developed for race cars, trains, airplanes and ocean liners, was extended in the 1920s to appliances like vacuum cleaners and washing machines. The smooth white towers of electric refrigerators (replacing clunky iceboxes) embodied the elegant new minimalism.
"Form ever follows function," said Louis Sullivan, the visionary Chicago architect who was a forefather of the Bauhaus. That maxim was a rubric for the boom in stylish interior décor, office machines and electronics following World War II: Olivetti typewriters, hi-fi amplifiers, portable transistor radios, space-age TVs, baby-blue Princess telephones. With the digital revolution came miniaturization. The Apple desktop computer bore no resemblance to the gigantic mainframes that once took up whole rooms. Hand-held cellphones became pocket-size.
Young people today are avidly immersed in this hyper-technological environment, where their primary aesthetic experiences are derived from beautifully engineered industrial design. Personalized hand-held devices are their letters, diaries, telephones and newspapers, as well as their round-the-clock conduits for music, videos and movies. But there is no spiritual dimension to an iPhone, as there is to great works of art.
Thus we live in a strange and contradictory culture, where the most talented college students are ideologically indoctrinated with contempt for the economic system that made their freedom, comforts and privileges possible. In the realm of arts and letters, religion is dismissed as reactionary and unhip. The spiritual language even of major abstract artists like Piet Mondrian, Jackson Pollock and Mark Rothko is ignored or suppressed.
Thus young artists have been betrayed and stunted by their elders before their careers have even begun. Is it any wonder that our fine arts have become a wasteland?
—Ms. Paglia is University Professor of Humanities and Media Studies at the University of the Arts in Philadelphia. Her sixth book, "Glittering Images: A Journey Through Art From Egypt to Star Wars," will be published Oct. 16 by Pantheon.
A version of this article appeared October 6, 2012, on page C3 in the U.S. edition of The Wall Street Journal, with the headline: How Capitalism Can Save Art.
Posted by jtf at 9:19 AM