Levon Helm and the Great River of American Music

The whole congregation was standing

On the banks of the river

We are gathered here

To give a little thanks thanks 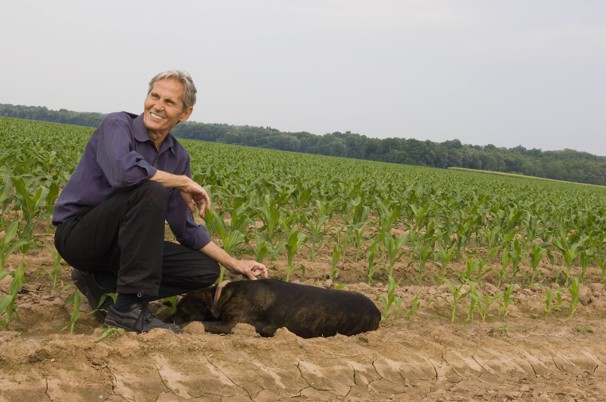 The town where I grew up, on a bend in the Mississippi River, has a long, rich musical history. Early in the last century, riverboats brought jazz and blues upriver from New Orleans, the Delta, Memphis, St. Louis, stopped in the Quad Cities, where I’m from, and livened up the local musical scene. It’s stayed lively ever since.

Bix Beiderbecke, a high school friend of my grandfather’s, heard Louis Armstrong blow his horn on a riverboat, picked up a cornet of his own and learned to play. Davenport, on the west bank of the river, was the most staid of the four cities, so the best musicians gravitated to the east bank, to Rock Island, with its more colorful reputation. Every summer, Davenport hosts a popular Dixieland jazz festival named for Bix in a downtown park with an old-fashioned band shell that’s been there as long as I can remember. After the festival wraps up each night, musicians still head over to the saloons of Rock Island to sit in with the locals.

I spent a lot of Sundays in that park. The local music scene was the habitat of my youth. My friends were all musicians or devoted enthusiasts of Chicago blues and rockabilly and that British blues hybrid (three chords, long solos, and a cloud of smoke) imported, run through a stack of Marshall amps, and exported back to America by its avid disciples in England. We were obsessed with music. It’s all we cared about. It’s all we did. I don’t play any instrument, but to this day I can tell the difference between the sounds of a Fender Telecaster and a Fender Stratocaster.

I had friends in a lot of bands, and in one band in particular. My friend, Pat, who started and led the group, had the keys to the band shell. And in warm months we’d all head to the park on Sunday afternoons, and listen to the boys play for free on the bank of that wide, brown river that runs too fast to swim across on its snaky way to the sea.

That was decades ago. We’ve all gone our separate ways. We’ve picked up new interests, moved to other towns, started families. Some of us are dead. I haven’t seen most of them for years, but we keep in touch a little through the convening power of social media. We have different religions, different politics, different enthusiasms. We’re old. But we still have the music in common.

I suppose every American has a happy mental image that comes to mind when the name of our country is invoked with pride. Some probably look like those warm, soft-focus images in political campaign commercials: flags hanging from front porches on the Fourth of July, a fireman returning a kitten to a child, tall ships parading past the Statue of Liberty. Mine is that band shell in the park by the river, where the music played.

That came into my mind the moment I heard the sad news that Levon Helm, drummer, singer and guiding spirit of The Band, was dying. He was a river of American popular music. Whatever you call it, roots music, Americana, R&B, rockabilly, gospel, country soul, he kept its rhythm and sang it as well as any American musician ever has. We heard all of it in that soulful howl of his lamenting the missing Ophelia and the soul-crushed Confederate soldier, and the temptations and ravages of the road.

The boy from Turkey Scratch, Ark., son of cotton farmers on the Delta plain, about 20 miles west of the Mississippi and radio station KFFA (home of “King Biscuit Time”). He sang us the river. That Scots-Irish, African, French, Mexican, Caribbean, Canadian and God-knows-what-else stew of a river that runs from the hills of North Carolina to Austin; from Nashville to Motown; from New York to L.A.; from Kansas City to Seattle; from Memphis to Chicago and St. Louis and Minneapolis and every town and crossroads on the way.

We’re a hell of a musical country. We’re a people with a soundtrack. The wind whistling through the pines and jackhammers tearing up concrete, guitars and fiddles in the subway, hip-hop on the corner, blues down the alley, “a saxophone in some far off place,” a flute in the desert.

Whatever levees we build between us, by color, class, creed or politics, the river overflows them. In the city, out in the country, on the plains or in the projects, we pine and dream and cry and love to some strain of American music that is connected to every other strain of American music. Levon showed us that, and made us want to sing along with him on his ramble.

All voices fall still, and now his has. We’re going to miss it. But the music is everywhere. And the river keeps the rhythm. Usually in 4/4 time, but whatever beat you like, you can have it.

Another death is bringing me back home this weekend. While I’m there, I’ll go down to the river for Levon, just to say thanks, man, thanks.


Mark Salter is the former chief of staff to Senator John McCain and was a senior adviser to the McCain for President campaign.