Handing out condoms on the Titanic 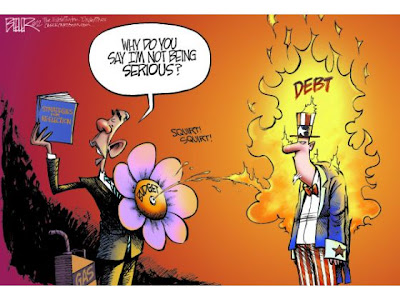 Have you seen the official White House version of what the New York Times headline writers call "A Responsible Budget"? My favorite bit is Chart 5-1 on Page 58 of their 500-page appendix on "Analytical Perspectives." This is entitled "Publicly Held Debt Under 2013 Budget Policy Projections." It's a straight line going straight up before disappearing off the top right hand corner of the graph in the year 2084 and continuing northeast straight through your eye socket, out the back of your skull and zooming up to rendezvous with Newt's space colony on the moon circa 2100. Just to emphasize, this isn't the doom-laden dystopian fancy of a right-wing apocalyptic loon like me; it's the official Oval Office version of where America's headed. In the New York Times-approved "responsible budget" there is no attempt even to pretend to bend the debt curve into something approaching re-entry with reality.

As for us doom-mongers, at the House Budget Committee on Thursday, Chairman Paul Ryan produced another chart, this time from the Congressional Budget Office, with an even steeper straight line showing debt rising to 900 percent of GDP and rocketing off the graph circa 2075. America's Treasury Secretary, Timmy Geithner the TurboTax Kid, thought the chart would have been even more hilarious if they'd run the numbers into the next millennium: "You could have taken it out to 3000 or to 4000" he chortled, to supportive titters from his aides. Has total societal collapse ever been such a nonstop laugh riot?

"Yeah, right." replied Ryan. "We cut it off at the end of the century because the economy, according to the CBO, shuts down in 2027 on this path."

The U.S. economy shuts down in 2027? Had you heard about that? It's like the ultimate President's Day Sale: Everything must go – literally! At such a moment, it may seem odd to find the political class embroiled in a bitter argument about the Obama administration's determination to force Catholic institutions (and, indeed, my company and your company, if you're foolish enough still to be in business in the United States) to provide free prophylactics to its employees. The received wisdom among media cynics is that Obama has engaged in an ingenious bit of misdirection by seizing on a pop-culture caricature of Republicans and inviting them to live up to it: Those uptight squares with the hang-ups about fornication have decided to force you to lead the same cheerless sex lives as them. I notice that in their coverage NPR and the evening news shows generally refer to the controversy as being about "contraception," discreetly avoiding mention of sterilization and pharmacological abortion, as if the GOP have finally jumped the shark in order to prevent you jumping anything at all.

It may well be that the Democrats succeed in establishing this narrative. But anyone who falls for it is a sap. In fact, these two issues – the Obama condoms-for-clunkers giveaway and a debt-to-GDP ratio of 900 percent by 2075 – are not unconnected. In Greece, 100 grandparents have 42 grandchildren – i.e., an upside-down family tree. As I wrote a few weeks ago, "If 100 geezers run up a bazillion dollars' worth of debt, is it likely that 42 youngsters will ever be able to pay it off?" Most analysts know the answer to that question: Greece is demographically insolvent. So it's looking to Germany to continue bankrolling its First World lifestyle.

But the Germans are also demographically exhausted: they have the highest proportion of childless women in Europe. One in three fräulein have checked out of the motherhood business entirely. A nation that did without having kids of its own is in no mood to maintain Greece as the ingrate slacker who never moves out of the house. As the European debt crisis staggers on, these two countries loathe each other ever more nakedly: The Greek president brings up his war record against the German bullies, and Athenian commentators warn of the new Fourth Reich. The Germans, for their part, would rather cut the Greeks loose. In a post-prosperity West, social solidarity – i.e., socio-economic fictions such as "Europe" – are the first to disappear.

The United States faces a mildly less-daunting arithmetic. Nevertheless, the Baby Boomers did not have enough children to maintain mid-20th century social programs. As a result, the children they did have will end their lives in a poorer, uglier, sicker, more divided and more violent society. How to avert this fate? In 2009 Nancy Pelosi called for free contraceptives as a form of economic stimulus. Ten thousand Americans retire every day, and leave insufficient progeny to pick up the slack. In effect, Nancy has rolled a giant condom over the entire American economy.

Testifying before Congress, Timmy Geithner referred only to "demographic challenges" – an oblique allusion to the fact that the U.S. economy is about to be terminally clobbered by $100 trillion of entitlement obligations it can never meet. And, as Chart 5-1 on page 58 of the official Obama budget "Analytical Perspectives" makes plain, your feckless, decadent rulers have no plans to do anything about it. Instead, the Democrats shriek, ooh, Republican prudes who can't get any action want to shut down your sex life! According to CBO projections, by midcentury mere interest payments on the debt will exceed federal revenue. For purposes of comparison, By 1788, Louis XVI's government in France was spending a mere 60 percent of revenue on debt service, and we know how that worked out for His Majesty shortly thereafter. Not to worry, says Barry Antoinette. Let them eat condoms.

This is a very curious priority for a dying republic. "Birth control" is accessible, indeed, ubiquitous, and, by comparison with anything from a gallon of gas to basic cable, one of the cheapest expenses in the average budget. Not even Rick Santorum, that notorious scourge of the sexually liberated, wishes to restrain the individual right to contraception.

But where is the compelling societal interest in the state prioritizing and subsidizing it? Especially when you're already the Brokest Nation in History. Elsewhere around the developed world, prudent politicians are advocating natalist policies designed to restock their empty maternity wards. A few years ago, announcing tax incentives for three-child families, Peter Costello, formerly Timmy Geithner's counterpart Down Under, put this way: "Have one for Mum, one for Dad, and one for Australia." But in America, an oblivious political class, led by a president who characterizes young motherhood as a "punishment," prefers to offer solutions to problems that don't exist rather than the ones that are all too real. I think this is what they call handing out condoms on the Titanic.

Glenn Reynolds, the Instapundit, distills the current hysteria thus: "It's as if we passed a law requiring mosques to sell bacon and then, when people objected, responded by saying 'What's wrong with bacon? You're trying to ban bacon!!!!'"

Americans foolish enough to fall for the Democrats' crude bit of misdirection can hardly complain about their rendezvous with the sharp end of that page 58 budget graph. People are free to buy bacon, and free to buy condoms. But the state has no compelling interest to force either down your throat. The notion that an all-powerful government would distract from its looming bankruptcy by introducing a universal contraceptive mandate would strike most novelists as almost too pat in its symbolism. It's like something out of "Brave New World." Except that it's cowardly, and, like so much else about the sexual revolution, very old and wrinkled.