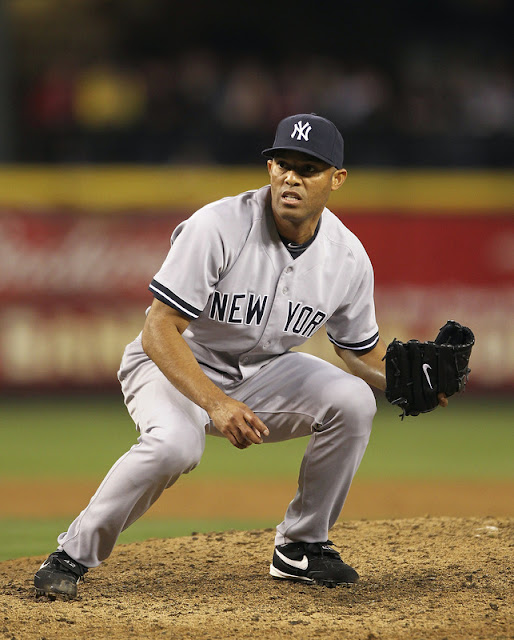 SEATTLE - SEPTEMBER 13: Closing pitcher Mariano Rivera(notes) #42 of the New York Yankees watches as Ichiro Suzuki(notes) #51 of the Seattle Mariners is thrown out stealing for the final out at Safeco Field on September 13, 2011 in Seattle, Washington. Rivera was credited with the save, the 41st of the season and 600th of his career. (Photo by Otto Greule Jr/Getty Images)

This is what the great W.C. Heinz wrote once about Sugar Ray Robinson, the one the old-timers all say was the greatest fighter, pound for pound, who ever lived:

"When the young assault me with their atomic miracles and reject my Crosby records and find comical the movies that once moved me, I shall entice them into talking about fighters. (Sugar Ray Robinson) will be a form of social security for me because they will have seen nothing like him, and I am convinced they never will."

Mo Rivera, who got to 600 saves Tuesday night, who got to his own magic number in the season of Derek Jeter getting to his own magic number on that 5-for-5 day against the Tampa Bay Rays, will be that kind of social security for us someday. Because after everything we have seen from the Yankees in this generation, all the winning they have done since the winning really started with Joe Torre's Yankees in 1996, Rivera has been the greatest of all of them.

Even now, as he gets to 600 and moves closer to the all-time record for saves, we know that nobody has ever seen anything like him. And those of us who have watched it all from Rivera, from the time he was the setup man to John Wetteland in 1996, are convinced that we never will.

He has lost something off his fastball. They all do eventually, even when they are the combination of grace and talent and excellence that Rivera has been for so long, over all the time when he has been the greatest money pitcher of them all, and the greatest Yankee pitcher, even pitching just the ninth inning.

You sit with him in front of his locker and ask him the difference now between his young self and his old self, and he smiles at you and points to his head and says, "Wisdom."

Most likely Jeter is the Yankee who will be remembered most for this time, because he has been the shortstop and the captain and the glamorous star of the team. And he sure did get all of his 3,000-plus hits for the Yankees. And he has been the face of the Yankees more than anybody else.

But you can see another Yankee getting to 3,000 someday, maybe even Robinson Cano. There will never be another Mariano Rivera, never be a power relief pitcher who goes for this long and this well, still pitching at the highest possible level as he approaches his 42nd birthday. There he was in Anaheim on Sunday afternoon, one more one-run game for him, coming in and getting the double play that ended the game and let the Yankees leave Southern California having gotten at least one game off the Angels.

He will turn 42 in November, the number on his back. He is the last active player in the big leagues wearing Jackie Robinson's number. When Rivera finally does retire, it will be one more number he takes with him.

You ask him about retirement, he gives you the same answer, every single time.

"No one will ever have to tell me when it is time to go," he says.

For now, he is not going anywhere. For now, he looks to be the Yankee closer who plays on six World Series champions, at least. One more time he wants to get the last out of a Series the way he did a couple of years ago when he got Shane Victorino on a ground ball and the Yankees beat the Phillies.

So many great players over the past 15years, starting with Jeter. So many famous names. We had the Core Four: Jeter, Rivera, Jorge Posada, Andy Pettitte. And A-Rod, bless his heart. The greatest of all of them is Rivera. He has been Babe Ruth doing his job out of the bullpen, but doing that job with DiMaggio's grace. Six hundred saves and counting. A magic number for Mo, to go with the magic he has always brought to the ninth inning with his fastballs and cut fastballs and control.

After all this time, and even at a ridiculous age for a closer, we are still shocked when he doesn't do the job.

"It's why people still remember the times you messed up like it was yesterday," he says. "But I've always understood that comes with the job, because with my job there is never much margin for error."

So, yeah, we still talk about the home run he gave up to Sandy Alomar Jr. in the first round of the playoffs in 1997, when the Yankees were four outs away from going to the American League Championship Series. We talk about the bottom of the ninth in Game 7 of the 2001 World Series, when the Diamondbacks came back to beat the Yankees, finally winning the Series on that little bloop single from Luis Gonzalez. For me it is still the most dramatic ending of any World Series ever played, even more than the Game 7 that ended with Bill Mazeroski's home run in 1960.

It was the most dramatic ending because the Diamondbacks got Rivera, the way the Red Sox did when the Yankees were three outs away from sweeping the Red Sox in the ALCS of 2004. Say it again: On those rare occasions when he has failed, the Yankees don't win.

But mostly when the ball and the ninth inning have been in his hands, they have won, over all the years, that one year when he set up Wetteland and then when he became the greatest closer of all. He was that again Tuesday night. Six hundred saves for No. 42. Never another one like him, never in this world. There have been other forms of social security like this in sports. Mo is ours.
Posted by jtf at 5:24 AM