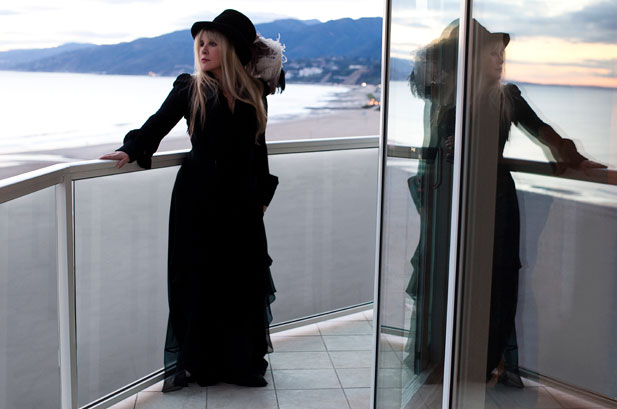 While writing the songs for Fleetwood Mac’s classic 1977 album “Rumours,” which remains one of the top 10 best-selling albums in US history, the group was inspired by enough relationship breakdowns, bed-hopping and substance abuse to make the “Jersey Shore” house look like a weekend at Bible camp.

While keyboardist/vocalist Christine McVie and bassist John McVie slogged through a harsh divorce, she wrote “You Make Loving Fun,” on which John had to play, about her new lover, the band’s lighting director.

Meanwhile, vocalist Stevie Nicks and singer/guitarist Lindsey Buckingham were mired in a devastating breakup of their own. So when Nicks wrote “Dreams” and Buckingham wrote “Go Your Own Way” about the bust-up, they each had to sing emotionally charged, bitter lyrics written about themselves.

Almost 35 years later, the legacy of this spiritual connection to former lover and bandmate Buckingham haunts Nicks’ every artistic move.

“When Lindsey and I sing ‘Go Your Own Way,’ we still look at each other with eye-slashing anger,” says Nicks, who last toured with Buckingham and Fleetwood Mac in 2009. “That never goes away, because we can never quite forget that situation.”

It’s hardly surprising, then, that Nicks’ feelings toward him are well-represented on “In Your Dreams,” her first solo album in a decade, out on Tuesday. The song “Moonlight (A Vampire’s Dream)” alternatively addresses her relationship with Buckingham, and the one between Edward and Bella from “Twilight,” two relationships in which she sees deep similarities. After seeing “New Moon” in 2009, Nicks took two verses from an old, unreleased Fleetwood Mac song from the ’70s, and intertwined it with an essay she wrote about the film.

The psychic weirdness between Nicks and Buckingham continues to this day. Buckingham appears on “In Your Dreams” in a song called “Soldier’s Angel” (Fleetwood Mac drummer and fellow ex-Nicks paramour Mick Fleetwood appears on the album as well), and Nicks says that the strange vibes that haunt the former lovers never fade.

“Lindsey and I are difficult people to work together,” says Nicks. “He’ll say to me, ‘I think that song should not be in the third person,’ and I go, ‘Would you say that to Bob Dylan?’ That shuts him up for a second.”

Singing the classics brings up other difficult memories. “Gold Dust Woman,” for example, recalls her days of cocaine abuse so pronounced that she burned a hole through the cartilage in her nose. Surprisingly, though, she says that cocaine was far less damaging to her than drugs that were prescribed by a doctor.

“I skated through the cocaine days pretty safely,” she says. “I went straight to Betty Ford when I knew I couldn’t do it anymore. But the stupid psychiatrist that put me on Klonopin — that was my death sentence.”

Nicks says that a shrink kept her dependent on the drug for seven years just so he could press her for debauched tales of Hollywood.

“If anything would have [killed] me, it would have been that,” she says. “You’re just getting fat and the lights are going out in your eyes. You’re losing [the ages] from 40 to 47, prime years of your life, sitting on a couch gaining 25 pounds. And this doctor just watches you and says, ‘How’s things with you and Lindsey? What about all the other rock stars in the world?’ ”

Despite her sensitivity for those with drug issues, one famous substance abuser has her riled — Lindsay Lohan, whose Stevie Nicks obsession has included butchering her song “Edge of Seventeen,” and talking publicly about wanting to play Nicks in a biopic.

“I thought [that version] was terrible,” says Nicks. “I have to laugh at [talk of her playing me], because I feel very sorry for her. She’s going to the slammer for three months. I would rather die than go to jail. For me, that makes me think even more that she’s insane. She’ll never play me in a movie.”

But aside from such distractions, Nicks is excited to play music that touches on the darker episodes in her life.

“Boring, blah things don’t bring out anything, and there’s just nothing boring or blah about [my or Lindsey’s] lives. We travel through this world in this insane way,” she says. “It’s difficult [to sing about], but it’s also wonderful, because if I had to go up there and sing these songs every night [without that], I would be extremely bored with all of them.” 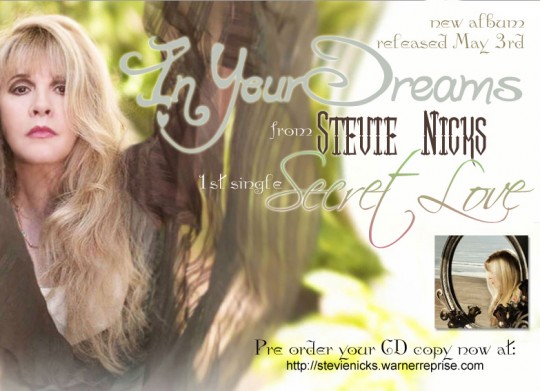 Stevie Nicks says it wasn't her intention to take a decade between solo albums.

Nicks -- whose "In Your Dreams," the follow-up to 2001's "Trouble in Shangri-La," comes out May 3 -- tells Billboard.com that she was ready to start work on a solo set in 2005 after touring with Fleetwood Mac.

"I was definitely ready to do a record," Nicks recalls, "but the powers that be, the people that surrounded me, pretty much said, 'Don't bother. It's not a good time. The music business is in a terrible place. There's no money, and the Internet piracy is taking over.'

I didn't know what to say, because I'm not a computer person and I don't have a computer and I don't Facebook or whatever. So I just said, 'OK.' If I hadn't been so exhausted from 135 shows I might have fought back on that a little, but I just didn't."

The wait may have been worthwhile, however. Nicks calls making "In Your Dreams" with producer Dave Stewart (along with Glen Ballard) "the best year of my life" and refers to the new album as "my own little 'Rumours.'" The trio recorded the 13-track set at a house Nicks owns in Los Angeles, and though she has mostly written alone in the past, Nicks collaborated with Stewart on seven of "In Your Dreams' " songs.

"We wrote the song 'You May Be the One,' and my eyes instantly opened and I understood why Paul McCartney and John Lennon wrote together -- because they each had something the other didn't have," explains Nicks, who gave Stewart a binder of 40 poems before they started working together. "And with Dave and me, he had thousands of chords and this amazing musical knowledge, and I had thousands of pages of poetry -- and I know six chords. It was like an amazing little meeting of the minds, and I immediately went, 'Well this is just great!' "

Some of the songs on "In Your Dreams" date back a ways in Nicks' life, including the first single, "Secret Love," which she wrote in 1975 about a love affair, and "Moonlight," which she also started in the mid-70s but finished after seeing the "Twilight: New Moon" film in 2009. Other collaborators on the album include guitarist Waddy Watchtel, Mike Campbell of Tom Petty's Heartbreakers and Mick Fleetwood, while Nicks called upon Lindsey Buckingham to perform on and help her finish "Soldiers Angel," which she says "is truly my most sacred and revered song."

"We recorded it live and did some harmonies, and then he did some little lead guitar things and it was perfect," Nicks says. "There's no other players, just me and him. Not only did we create something that's probably as Buckingham Nicks as we have been since 1973, but... I think that song really brought Lindsey and I back together. He said to me as he was leaving on that second day, 'I feel like we're closer than we've been in 30 years.' It certainly opens a lot of doors."

When she'll go through them remains to be seen, however. She and Stewart filmed the "In Your Dreams" sessions; the footage appears in the "Secret Love" video and will be used in other ways down the line, and Nicks hopes "to go all over the world with this record." She adds that touring with Rod Stewart, as she did earlier this year, "might end up being done again because it did go very well."

And Nicks predicts Fleetwood Mac isn't done, though the group will have to wait for her and "In Your Dreams" as well as Buckingham and his forthcoming album "Seeds We Sow," which is due in September and which Nicks says is "really my favorite thing he's ever done -- and I wish he had saved all these amazing songs for Fleetwood Mac."

"When ('In Your Dreams') runs out of gas, as all records eventually do, then possibly Fleetwood Mac will regroup and do another thing -- whether it's a record or a tour, I don't know," Nicks says. "Or maybe Lindsey and I will go off and rent a house in Wales and do a Buckingham Nicks album. I have no idea, but I do know the music will continue."


Review: 'In Your Dreams' by Stevie Nicks 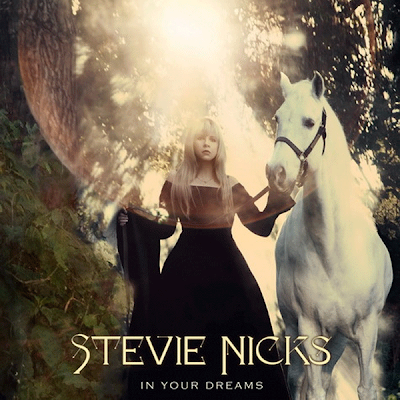 Stevie Nicks built her legend on the California-Babylon chronicles she perfected in the Seventies with Fleetwood Mac, and in the Eighties on underrated solo gems like The Other Side of the Mirror. But she still has that eternal edge-of-17 tremor in her voice. The gypsy queen is in royal form on In Your Dreams — it's not just her first album in 10 years, it's her finest collection of songs since the Eighties.

In Your Dreams has the high-gloss L.A. production of her collaborators, Glen Ballard and Eurythmics' Dave Stewart. But the material is Nicks in platform-soled hyper-romantic mode, with her voice in surprisingly supple shape. "Secret Love" is an oldie she wrote in 1976 — who knew she was still keeping secrets from her Rumours days? It seems to be about one of her rock-star beaus, although she coyly maintains she can't remember which one. Yet it isn't even one of the better tracks on In Your Dreams. The over-the-top seduction ballad "Italian Summer" could be her answer to the Stones' "Wild Horses." It climaxes in a very Stevie credo: "Love was everywhere/You just had to fall."

Nicks finds storytelling inspiration everywhere, from the Twilight series ("Moonlight [A Vampire's Dream]") to Jean Rhys ("Wide Sargasso Sea"). But the real showstopper here is the Edgar Allan Poe tribute "Annabel Lee," a fan fave that's been kicking around on bootlegs since the Nineties. It's a six-minute meditation on love and death with echoes of the Fleetwood Mac classic "Dreams." Poe's key line — "The moon never beams without bringing me dreams" — might have been written in 1849, but it was clearly meant for Stevie Nicks to sing.