The Times Loses It

Sense and nonsense about Tucson.

It was a weekend of great sorrow. On Saturday, January 8, an insane young man tried to kill Congresswoman Gabrielle Giffords, injuring her horribly. The man then fired his gun into a small political gathering, murdering a nine-year-old girl, a federal judge, a congressional staffer, and three of Giffords’s constituents. Thirteen other people were wounded. In the midst of life we are in death. There is, in this world, no making sense of such events.

Among the worldly, however, there is a temptation to make nonsense. Thus it was that on Sunday, January 9, the New York Times provided a further grief, much less important than the death and mutilation of innocents but shameful nonetheless. 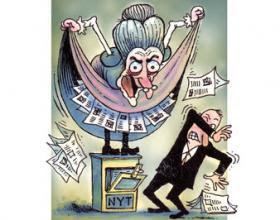 The Times ran, as its second lead, above the fold on the front page, a story about the Tucson shootings headlined “Bloodshed Puts New Focus on Vitriol in Politics.” The article, by Carl Hulse and Kate Zernike, contains almost nothing newsworthy. Nor can it be called news analysis, beginning as it does with an attempt to create a self-fulfilling prophecy: “The shooting of Representative Gabrielle Giffords .  .  . set off what is likely to be a wrenching debate over anger and violence in American politics.”

If self-fulfilling prophecies were wanted from reporters​—​and they are not​—​a better one would have been “Bloodshed Puts New Focus on Mental Health Policies.” The person in custody for the Tucson crimes is, according to all accounts, profoundly crazy. For decades in America there has been an effort to ensure that the rights of those who are not sane are the same as the rights of those who are. Perhaps a wrenching debate over this should be had.

In the article’s second paragraph we are told that the accused, Jared Loughner, had an Internet site that “contained antigovernment ramblings.” The same may be said​—​at least in respect to ramblings against the newly sworn-in House of Representatives​—​about Internet sites posting speeches by President Obama.

But antigovernment ramblings coming from outside the government are so sinister that they are sinister whether they are sinister or not. “And regardless of what led to the episode,” Hulse and Zernike say, “it quickly focused attention on the degree to which inflammatory language, threats and implicit instigations to violence have become a steady undercurrent in the nation’s political culture.”

To maintain that there’s a lack of evidence for such a sweeping statement would be inaccurate since Hulse and Zernike themselves are doing what they claim is being done. And given the tight deadlines of a Sunday edition they have focused their attention quickly indeed.

They make an interesting choice of verb tense in “have become.” Maybe Hulse and Zernike are very young and, what with the way American history is taught these days, are unaware of riots, bombings, lynchings, exterminations of native peoples, assassinations, assassination attempts, gun fights, and the Civil War, not to mention the inflammatory language, threats, and implicit instigations to violence in the writings of Tom Paine.

Or maybe Hulse and Zernike are old hacks in the pocket of certain political interests that feel threatened by populism. A member of the populace​—​however deranged​—​has shot a liberal​—​albeit one who is independent and selective in her liberalism. Even this most pathetic of excuses will serve. Ordinary Americans skeptical about the powers, prerogatives, and expense of certain political interests shall be execrated.

Hulse and Zernike do say, “In the hours immediately after the shooting .  .  . top Republicans including Speaker John A. Boehner and Gov. Jan Brewer of Arizona quickly condemned the violence.” There’s that word “quickly” again, a superfluous modifier, this time implying that slow, reluctant condemnation might have been expected.

The sheriff of Pima County is quoted: “He said it was time for the country to ‘do a little soul-searching.’ ” Hulse and Zernike don’t take his advice and recommence arguing beside the point about health care legislation that “ignited opposition from the Tea Party movement” and “stirred strong feelings that flared at angry town hall meeting held by many Democratic lawmakers.” This, it seems, is part of a “broader anger and suspicion rising about the government, its finances and its goals, with the discourse partially fueled by talk shows and websites.”

Then they’re off again, into the jump, for a total of more than 18 column inches of “protesters outside the House hurling insults and slurs .  .  . ” “Sarah Palin’s political action committee with cross hairs .  .  . ” “Republican candidates seemed to raise the prospect of armed revolt .  .  . ” and “other Tea Party activists said it would be hard to separate the shooting in Tucson from the current ideological clash.”

Hulse and Zernike have the nerve to end with a quote from one of the “other Tea Party activists,” Judson Phillips, founder of Tea Party Nation: “Violence of this nature should be decried by everyone and not used for political gain.” Left unprinted are descriptions of Hulse and Zernike smirking.

A great deal of other ugly and offensive writing went off on a tangent from the crime scene and wound up published in the Sunday New York Times.

Some was in the guise of commentary, such as Matt Bai’s dredging up of a quip by Sharron Angle, “I hope we’re not getting to Second Amendment remedies.” Gabrielle Giffords is a gun rights advocate.

Some was in the news coverage: “Democrats denounced the fierce partisan atmosphere in Ms. Giffords’s district.” Voters in that conservative locale chose Giffords over a GOP candidate backed by Tea Party supporters.

The most cringe-inducing article was titled “In the Shock of the Moment, the Politicking Stops .  .  . Until It Doesn’t.” Jeff Zeleny and Jim Rutenberg wrote, “Some Democrats were urging [President Obama] to look back to recent history, when President Bill Clinton seized the political high ground after the 1995 Oklahoma City bombing.”

In the matter of self-serving, bitter, calculated cynicism, there wouldn’t seem to be much left to prove against the Times. Judging by what I’ve heard from my fellow conservatives, the issue is decided. The New York Times is a worthless, truthless, vicious institution. But I disagree. I think things are worse than that.

A reaction so disproportionate and immaterial to a news story by a news organization is indicative of trouble in the body politic​—​trouble almost as severe as that which the Times claims the Giffords shooting indicates. I worry that in the tremors and hysteria of the Times we’re seeing the sad end of liberalism.

Its passing is to be mourned, perhaps most by true conservatives. -Civilization owes a debt to liberal politics. From the Reform Act and the religious emancipation fight of the British Whigs to the American civil rights movement, liberals have in fact held positions on political high ground (though not during Clinton’s exploitation of the Oklahoma City bombing). Liberals have seen government as a force for good, and sometimes it can be. World War II comes to mind. While conservatives have delighted in the free market, liberals have been there to remind us that all freedoms, including market freedoms, entail responsibilities. At the very least it can be said that we conservatives would not be so upright in our ideals if we hadn’t been pushing against liberals.

But liberalism, as personified by the New York Times, became a dotty old aunt sometime during the Johnson administration. She’s provincial, eccentric, and holds dull, peculiar views about the world. Still, she has our fond regard, and we visit her regularly in her nursing home otherwise known as Arts and Leisure and the Book Review. Or we did until Sunday, January 9, when she began spouting obscenities and exposing herself.

We observe in the Times a bizarre overreaction to people and things that can be construed as “antigovernment.” (And all people and most things often can be so construed, e.g., the man who just got a speeding ticket.) The Times has become delusional, going from advocating big government to believing that it is the big government. Americans being somewhat disgruntled with big government, the Times imagines itself under attack from every side, even, no doubt, from within.

Ross Douthat wrote a calm, well-reasoned Monday Times opinion column about how most contemporary attacks on American politicians have been of greater interest to psychiatrists than ideologues. “From the Republican leadership to the Tea Party grass roots, all of Gabrielle Giffords’s political opponents were united in horror at the weekend’s events.” The newspaper probably heard this as a hallucinatory voice in its head urging self-destruction. If we’re going to discuss dark, paranoid corners of the Internet that have an unwholesome influence on our national life, there’s the New York Times online.

- P.J. O’Rourke is a contributing editor to The Weekly Standard.
Posted by jtf at 8:38 AM