HAPPY WARRIOR from the April 19, 2010 issue of National Review
http://www.nationalreview.com/

You’ve probably heard of Geert Wilders, the “far right” Dutch politician currently on trial in Amsterdam for offending Islam. But have you heard of Guy Earle? He’s a Canadian stand-up comedian currently on trial in Vancouver for offending lesbians. Two lesbians in particular. They came to a late-night comedy show he was hosting and got a table near the stage. They were drunk, and began disrupting the act, and so he did the old Don Rickles thing and put down the hecklers. So, naturally, the aggrieved party went to the British Columbia “Human Rights” Tribunal, and Mr Earle has now been hauled into the dock for the “homophobic” nature of his putdowns. 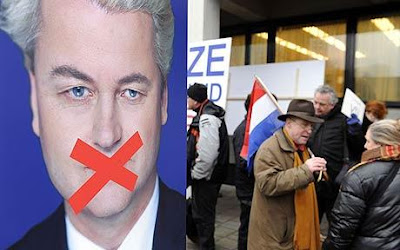 Between them, these two trials symbolize where most of the western world is headed, and very fast. Geert Wilders is an elected member of parliament and the leader of what, since last month’s local elections, is the second biggest political party in the Hague and, according to recent national polls, tied for first place as the most popular party in the country. So, although he’s invariably labeled “far right” in European and US news reports, how far he is depends on where you’re standing: When the “extreme right” “fringe” is more popular than the “mainstream”, maybe the mainstream isn’t that mainstream, and the center isn’t exactly where the European establishment would like it to be.

A while back, Wilders was asked what his party would do in its first days in office after winning the election (to be held later this year). He replied that it would pass a bill ending “non-western immigration” to the Netherlands. This remark is now one of the “crimes” listed on the indictment against him. So the Dutch state is explicitly prosecuting the political platform of the most popular opposition party in the country. Which is the sort of thing we used to associate with your average banana-republic caudillo rather than free societies.

So a man who lives under armed guard because Muslims want to kill him is now on trial for “incitement”. But, of course, this was a fight the famously provocative Wilders chose to pick: He feels Islamization puts a question mark over the continued existence of his country, and that therefore he is bound to resist it. He knew what he was doing.

By contrast, Guy Earle had no idea what he was doing. Until the aggrieved Sapphists consumed his life, he was a man of conventionally Canadian views. He’s not a rightwing blowhard like me or Ezra Levant or Geert Wilders. When he first found himself ensnared by the “human rights” circus, he got some comedy colleagues to organize a fundraiser for him, and they all said “f—k” a lot and did anti-Bush jokes. If that’s not “mainstream”, what is? He offered to make a kind of apology and a donation to a "woman advocate group", whatever that is. In other words, he didn’t react like Ezra and me and go nuclear on the whole ugly racket.

But they screwed him over anyway, and in the three years since all the cool comedians who pride themselves on their “edginess” and “transgressiveness” and their courage in speaking truth to power seem to have fallen by the wayside, and the business as a whole has decided that discretion is the better part of valor. To fund his stay in Vancouver for the trial, he suggested a possible booking to a promoter he knew. But the promoter figured he didn’t need a lot of trouble from “the gay community”: “A lot of people don’t want to have anything to do with me,” Earle told radio host Rob Breakenridge. “I don’t know what the silver lining is.” After three years on the receiving end of Canadian “human rights”, he’s out of dough, out of laughs, and facing a $20,000 shakedown from the aggrieved lesbian.

Under Canada’s “human rights” regime, members of preferred identity groups – women, gays, Muslims – can sue and get their tab picked up by the taxpayer, and defendants have their lives and savings destroyed, regardless of the verdict, which by the time it comes is all but irrelevant. Canadian “liberals” are generally satisfied with the system, because they assume it’s just rightwing haters like me and Levant who get clobbered. But in fact most of the victims are fellows like Guy Earle – they hold all the correct views on the Iraq war, gay marriage and everything else, but they get destroyed anyway. All tyranny is whimsical, and, with the state ever more aggressive in its role as the only legitimate mediator between identity groups, its whimsicality will inevitably fall on those just trying to keep their heads down and get on with life without catching the commissar’s eye.

If Geert Wilders is convicted and jailed, there will be consequences. Significant numbers of Dutch citizens understand that something important is at stake in this trial – even if the media don’t quite know how to cover it. No matter what evasions and euphemisms you deploy, the awkward reality glares through: Wilders is being prosecuted for his opinions, and that truth is simply too shaming, even to the Dutch poodle media.

The Earle trial is attracting even less coverage, perhaps because it’s even more embarrassing: Canada is now a land that prosecutes comedians for their jokes. But there is no equivalent sense that anything big is at stake. It’s just an incremental increase in the state’s reach. Mr Earle will be convicted, few people will pay any attention, and the next case will be more absurd, and the one after that even more so. The lesson for the overreaching Dutch establishment is that, if you’re going to extinguish the lamps of liberty, do it one by one, and no one will notice.
Posted by jtf at 8:48 AM