Why Elvis was so loved

This weekend is a very special weekend for Elvis Presley fans. I'm sure they spent all of Friday in their homes, watching that marathon of his films on Turner Classic Movies, snacking down on fried-peanut-butter-and-banana sandwiches. Local Elvis fans may have also checked out the annual Elvisfest in Chapel Hill on Friday and Saturday. 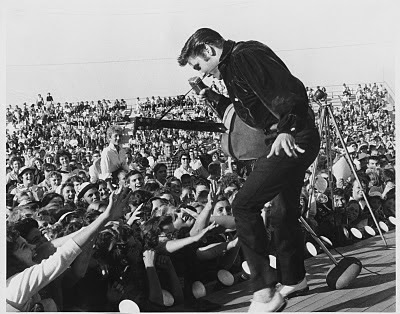 On Friday, Elvis Aaron Presley would've been 75 years old. (Yes, I'm going out on a limb and saying that the man did, in fact, die in 1977.) And as we begin the second decade of the 21st century, it's fascinating to see how Presley is still considered an icon worth honoring, even worshiping. According to a recent Vanity Fair article, 84 percent of Americans have had their lives touched by Elvis Presley in some way.

A friend told me not long ago that her mother used to serve Presley and his family when she was a flight attendant. Presley kissed her mom on the cheek when she was at one of his shows. My friend said she had to pull this bit of knowledge out of her mom, as though this were sacred information to take to her grave. That's what Elvis did to people, folks. He made mere mortals feel as though it was the highest honor to be in his presence. And many people were glad to accept that idea.

That certainly appears to be the focus of two new books on Presley: "Elvis: My Best Man" (Crown) and "Baby, Let's Play House: Elvis Presley and the Women Who Loved Him" (It Books). Released Tuesday, the books are different in scope. "Man" is written by disc jockey and longtime associate George Klein (with Chuck Crisafulli) and is more of an affectionate memoir of how Klein (dubbed "GK" by Presley) went from high-school acquaintance of Presley to one of the closest members of his "Memphis Mafia" posse.

For critical commentary, detailed storytelling and juicy gossip, you might want to thumb through "House," written by music journalist and Elvis biographer Alanna Nash. A thick tome, it details Presley's lifelong relationship with the opposite sex. It starts off, of course, with the extremely close (practically to the point of unhealthy) bond he had with his mother, Gladys. Then, it clocks off all the courtships, flings, dalliances and respectable friendships he's had with the ladies - some famous (Ann-Margaret!), some infamous (a dysfunctional coupling with a particularly unhinged Natalie Wood).

Both books mention how accessible and giving Presley was to his fans. While Presley was not the first artist to receive pop-star adoration (he showed up on Frank Sinatra's hipster heels), he seemed to have been the first to be openly grateful for it. As adults feared Presley and his sexually suggestive dance moves, androgynous appearance, and favoring of performing music with a black influence, the young crowd was coming in droves. And Presley fed off it.

In his book, Klein recalls how one run-in with a fan ended with Presley reprimanding Klein and another crony:

"I remember pulling off the MGM lot one day, and as usual we slowed for a moment so that Elvis could wave to fans of his who had been waiting at the gate. One guy approached our open window and shouted, 'Elvis, I wrote a song for you!' Alan yelled back, 'Sing it! Sing it!' As the car started to pull away, this guy was running alongside trying to sing his song. Alan and I started laughing, but Elvis shot us the dirtiest of looks and told us to stop. 'That's a guy who buys my records and goes to my movies,' he said. 'Don't make him feel bad about it.'" 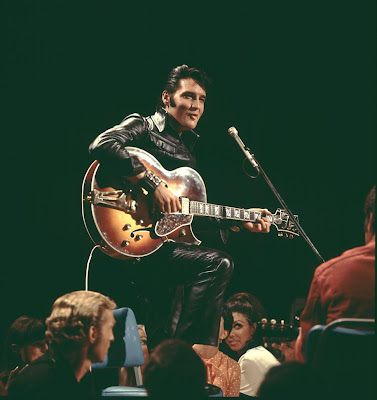 Even people who have never met Presley, like Raleigh music producer John Custer (for groups such as Corrosion of Conformity, Dag), can understand the effect he had on people. "Elvis seemed to retain the idea of being a decent person, or at least trying to be a decent person," says Custer, who says he met many people in his career who had interacted with Presley.
"That's one of the ways he honored his mother. From everybody that I've ever met that knew of him, they said he was exceptionally kind. Of course, subsequently, celebrities are not, you know, in most cases."

Custer also insists that, just like with another dearly departed pop god, Presley needed the fans as much as they needed him.

"It's interesting losing Michael Jackson last year," he says. "It seems to be the same kind of thing, that the fans were everything to those guys. They were so isolated and cut off that the fans were the only opportunity to have any kind of real human connection. It's impossible to imagine that kind of isolation that those guys went through. So I would imagine that fans would become very important to feed that part of your ego, your emotional need for connection."

With all true pop stars, it's about the total package: looks, charisma, likability and actual talent. Presley did have all those things, but he also had the ability to remain relatable and vulnerably human. Presley may forever be known as The King, a godlike, otherworldly creature who introduced rock 'n' roll to sexually repressed masses. But he was always that shy boy from Memphis, trailing around with a guitar in hand, looking for somebody to sing to.