Avaricious developers and governments twist the meaning of 'blight'

By George F. Will
The Washington Post
Sunday, January 3, 2010; A17
http://www.washingtonpost.com

BROOKLYN- On Aug. 27, 1776, British forces routed George Washington's novice army in the Battle of Brooklyn, which was fought in fields and woods where today the battle of Prospect Heights is being fought. Americans' liberty is again under assault, but this time by overbearing American governments.

The fight involves an especially egregious example of today's eminent domain racket. The issue is a form of government theft that the Supreme Court encouraged with its worst decision of the past decade -- one that probably will be radically revised in this one. 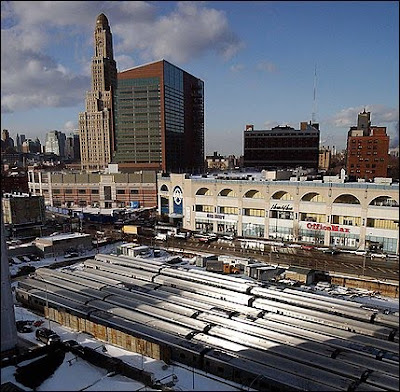 Brooklyn's Atlantic Yards, where a battle over development is being fought. (2004 Photo By Dean Cox/Associated Press)

The Atlantic Yards site, where 10 subway lines and one railway line converge, is the center of the bustling Prospect Heights neighborhood of mostly small businesses and middle-class residences. Its energy and gentrification are reasons why 22 acres of this area -- the World Trade Center site is only 16 acres -- are coveted by Bruce Ratner, a politically connected developer collaborating with the avaricious city and state governments.

To seize the acres for Ratner's use, government must claim that the area -- which is desirable because it is vibrant -- is "blighted." The cognitive dissonance would embarrass Ratner and his collaborating politicians, had their cupidity not extinguished their sense of the absurd.

The condo of Daniel Goldstein, his wife and year-old daughter, which cost Goldstein $590,000 in 2003, is on part of the land where Ratner's $4.9 billion project would be built -- with the assistance of more than $1 billion in corporate welfare from the state and city governments, which are drowning in red ink. The Goldsteins' building would not seem blighted to anyone not paid to see blight for the convenience of the payers. Which is of constitutional significance.

The Constitution says that government may not take private property other than for a "public use." By "public," the Framers, who did not scatter adjectives carelessly, meant uses -- roads, bridges, parks, public buildings -- directly owned or primarily used by the general public. In 1954, however, in a case concerning a crime- and infectious-disease-ridden section of Washington, D.C., the court expanded the notion of "public use" to include removing "blight."

Since then, that term, untethered from serious social dangers, has become elastic in the service of avarice. In 2005, the court held, 5 to 4, that New London, Conn., could take the property of a middle-class neighborhood and transfer it to a corporate developer who would pay more taxes to the city government than the evicted homeowners had paid. Justice Sandra Day O'Connor, dissenting, warned that the consequences of the decision would "not be random." The beneficiaries would be people "with disproportionate influence and power in the political process."

Enter Ratner, with plans to build a huge complex of high-rise residences, commercial properties and a basketball arena for the NBA's New Jersey Nets, which he bought. The city and state governments salivated at the thought of new revenue -- perhaps chimerical -- to waste. The problem was, and is, that people live and work where Ratner wants to build.

So blight had to be discovered. It duly was, by a firm that specializes in such discoveries. New York's highest court ratified that finding, 6 to 1.

But a week later, Columbia University, which has plans for a $6.3 billion expansion in Manhattan, was stymied in its attempt to wield the life-shattering power of eminent domain against several local businesses that do not want to be shattered. A state court held, 3 to 2, that condemnation proceedings had been unconstitutional. The court said the blight designation was "mere sophistry": "Even a cursory examination of the study reveals the idiocy of considering things like unpainted block walls or loose awning supports as evidence of a blighted neighborhood." The idiocy was written on Columbia's behalf by the same firm that Empire State Development Corp. hired to find blight at the Brooklyn site. Both Columbia and Ratner are operating in partnership with the ESDC, an arm of the state government. Both Columbia's and Ratner's attempts at seizing property are "pretextual takings," using trumped-up accusations of blight to concoct a spurious "public use" for a preconceived project.

The Atlantic Yards nonsense was compounded when Ratner, to bolster his balance sheet after the real estate collapse, sold the Nets to a Russian billionaire, who stands to benefit from Ratner's government-subsidized seizure of other people's property. Those people can only hope that New York's highest court will grant their appeal for reconsideration on the grounds that Ratner's argument is about as good as the Nets are. Through Saturday, their record was 3-30.

georgewill@washpost.com
Posted by jtf at 8:38 AM