Free speech goes on trial in the Netherlands on January 20, when Dutch politician Geert Wilders appears before the Amsterdam District Court on charges of having “intentionally offended a group of people, i.e. Muslims, based on their religion,” as well as having incited to hatred and discrimination. 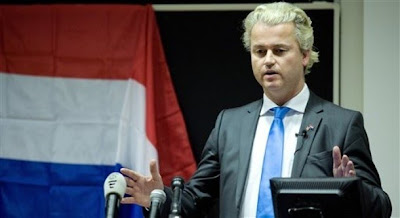 Dutch MP Geert Wilders speaks to Columbia University students, Wednesday, Oct. 21, 2009 at Columbia University in New York. Wilders told the students he wanted to discuss freedom of speech and the expanding threat of Islamisation of our Western societies. (AP)

What did Wilders do to warrant such charges? He told the truth about the global jihad and Islamic supremacism, and their roots in Islamic texts and teachings, in his film Fitna and elsewhere. But nowadays truth-telling is at such a premium that those who still dare to engage in it are threatened, harassed and prosecuted.

But Wilders is defiant: “On the 20th of January 2010, a political trial will start. I am being prosecuted for my political convictions. The freedom of speech is on the verge of collapsing. If a politician is not allowed to criticise an ideology anymore, this means that we are lost, and it will lead to the end of our freedom. However I remain combative: I am convinced that I will be acquitted.”

The very idea of trying someone for offending someone else is absurd – especially when the offended group is known to traffic in the PC multiculturalist coin of wounded feelings, so as to gain the political power that comes from victim status. That the Amsterdam District Court would aid and abet this absurdity and obvious manipulation unmasks the Wilders trial – even before it starts – as what it really is: an attempt by the nation’s political elites to silence one of their most formidable critics. The one who has the power to decide what is an actionable offensive statement or prosecutable incitement has the power to control the discourse – and that’s what the prosecution of Wilders is all about. If offending someone is a crime, can those who find hate speech laws offensive bring suit against their framers?

The action against Wilders is taking place, moreover, against the backdrop of the 57-government Organization of the Islamic Conference’s ongoing efforts at the United Nations to silence speech that they deem critical of Islam — including “defamation of Islam” that goes under the “pretext” of “freedom of expression, counter terrorism or national security.”

If they succeed in doing this, Europeans and Americans will be rendered mute, and thus defenseless, in the face of the advancing jihad and attempt to impose Sharia on the West — in fact, one of the key elements of the laws for dhimmis, non-Muslims subjugated under Islamic rule, is that they are never critical of Islam, Muhammad, or the Qur’an. Thus this prosecution in Amsterdam not only aids the advance of Sharia in the West, but is itself an element of that advance.

The stakes are so high in the Wilders case also because the OIC has a new, powerful ally as it moves against the freedom of speech. In October the Obama Administration actually co-sponsored an anti-free speech resolution at the United Nations. Approved by the U.N. Human Rights Council, the resolution, cosponsored by the U.S. and Egypt, calls on states to condemn and criminalize “any advocacy of national, racial or religious hatred that constitutes incitement to discrimination, hostility or violence.”

Last year the Secretary General of the OIC, Ekmeleddin Ihsanoglu, issued a warning: “We sent a clear message to the West regarding the red lines that should not be crossed” regarding free speech about Islam and terrorism. And he reported success: “The official West and its public opinion are all now well-aware of the sensitivities of these issues. They have also started to look seriously into the question of freedom of expression from the perspective of its inherent responsibility, which should not be overlooked.”

For the first time, an American President has bowed to the OIC’s demands and taken cognizance of that “responsibility.”

But Geert Wilders, and all those who stand with him, have a responsibility, too. We have a responsibility to bear witness to the world that the freedom of speech is a cornerstone of any free society, and that once it is gone, there is no defense against tyranny, no safeguard against the encroaching power of a protected class against whom there is no appeal, and from whose rulings there is no dissent. If Geert Wilders is found guilty, tyranny and authoritarianism will have won a huge victory in Europe, and in the world in general.

The stakes are as high as they can possibly be. Geert Wilders must prevail. If he does not, Europe, and America, and the world, are in for a long, dark night.