"There came a smell off the shore like the smell of a garden."

If John Winthrop was in clined to find godly favor in the wilds of New England, other newcomers didn't see the signs the same way. William Bradford landed a decade before Winthrop. "What could they see," he wrote of the Pilgrims confronting the new land, "but a hideous and desolate wilderness, full of wild beasts and wild men?"

Half of them died that first terrible winter in Plymouth, and if it weren't for constant human reinforcements, New England might have stalled out. In the end, though, Winthrop proved right: The colonists had arrived on a continent of awe-inspiring abundance. With ingenuity and commercial pluck, they tapped its vast riches in what would become history's greatest adventure in wealth-creation. 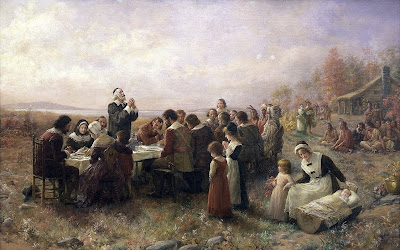 "The First Thanksgiving at Plymouth" (1914) By Jennie A. Brownscombe

It all started with the natural windfall. There was the sheer amount of land, much of it arable, which allowed for an ever-westward march. There was the game, the deer and the buffalo, and the smaller animals hunted and trapped for fur. There were the fishing grounds, alive with the cod that the settlers soon were exporting to Europe and the West Indies in prodigious quantities. And there were the trees that -- with an assist from the handy ax -- yielded homes, warmth, fences and ships.

But it was the nature and mores of the people that mattered most. They weren't given to sitting still.

"The Pilgrims," Ted Morgan writes in his book "Wilderness at Dawn," "are our first example of that restless mobility that was supposed to have originated on the frontier." By the time they came to the New World -- from England via Holland -- it was because they had no place else to go.

Early on, the Pilgrims grasped a basic point about economic motivation. In 1623, they rejected their initial system of collectivism; each family got its own plot of land. Bradford called it "a very good success, for it makes all hands very industrious." They had learned "the vanity of that conceit of Plato's . . . that the taking away of property and bringing community into a commonwealth would make them happy and flourishing."

The economic historian John Steele Gordon points out that Puritan merchants often wrote at the top of their ledgers, "In the name of God and profit." The settlers who poured into New England included tradesmen of all sorts, bringing their hustle and shrewdness. They quickly resorted to technology to make up for the relative absence of labor.

The first sawmill opened in 1634; a dozen were operating by 1650. John Winthrop's son took an interest in industry and established an ironworks in the 1640s. By 1700, Boston trailed only London as a ship-building city in the British Empire. "By the end of the Colonial era," Gordon writes, "the colonies were producing one-seventh of the world's supply of pig iron."

As our Founding Fathers knew in their bones, this represented the merest beginning, situated as we were in what George Washington called "a most enviable condition."

This triumph came with painful fits and starts, of course. Even immediately after the American Revolution, a brief recession hit and people worried about the young country already losing its purpose. The incredulous comment of one observer has remained an apt rebuke to pessimists about the US future across the centuries: "If we are undone, we are the most splendidly ruined of any nation in the universe."

comments.lowry@ nationalreview.com
Posted by jtf at 9:17 AM

Anonymous said...
This comment has been removed by a blog administrator.
10:18 PM