Clap hands, the way he does when he pulls into second base in the bottom of the ninth, staring into the dugout with that grin of his.

Clap hands for Derek Jeter, breaking the record of Lou Gehrig for most hits by a Yankee. Not just any franchise. The Yankees.

Clap hands for Jeter, who is having the year of his life, swatting base hits and fielding his position, not that he will talk much about himself. 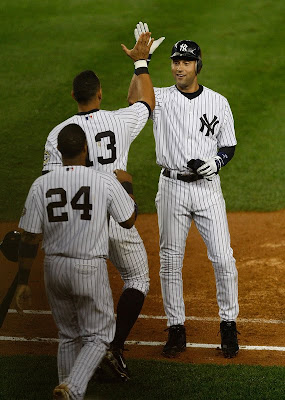 NEW YORK - SEPTEMBER 11: Derek Jeter(notes) #2 of the New York Yankees celebrates with teammate Alex Rodriguez(notes) #13 after hitting a single to right field in the third inning during a game against the Baltimore Orioles at Yankee Stadium on September 11, 2009 in the Bronx borough of New York City. Jeter's hit was his 2,722nd, passing Lou Gehrig's all-time club record of 2,721. (Photo by Jared Wickerham/Getty Images)

Raised right, the other day he said his parents gave him permission to put aside his captain persona and, for a second or two, enjoy approaching Gehrig’s record.

The record is important because the Yankees are — and recognize that this is coming from an old Brooklyn Dodgers fan — the great sports franchise of America, in terms of championships and legends, never mind the Steelers and the Celtics and so on.

Jeter now has more hits as a Yankee than Ruth or Gehrig or DiMaggio or Mantle or Mattingly or Williams, all those grand Yankees who need no introduction. He has surpassed them in the summer he turned 35, still metaphorically diving into the stands, chin-first.

Clap hands for the name itself. Bob Sheppard is home on Long Island — doing fine, thank you for asking — but his recorded voice resonates in the Bronx, introducing “Number Two, Derek Jee-tah.”

Women of all ages love Derek Jee-tah. Ruth Taxerman of New Jersey, who died Aug. 28, saw Gehrig play when she was young, and said he was very handsome, and she thought the same about Jeter. In her final days, the radio was on in her room, so she could follow her surrogate sons. She told her actual son, Alan Taxerman, that Jeter was the perfect Yankee to break Gehrig’s record.

Jeter has accomplished this feat in his prime, not backing into it, some grand old man playing a few days a week, designated hitter, backup first baseman, the stuff of old age, way down the pike. He breaks the record lean and spry and relatively healthy, although how would anybody know? Joe Torre — Mr. Torre — would ask how he felt, and Jeter would say, “I’m fine.” Tells that to the trainers, too. 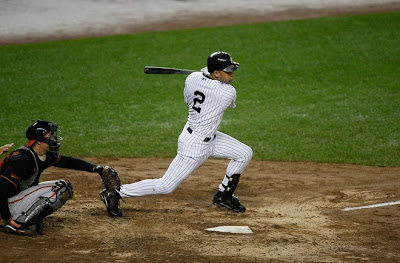 NEW YORK - SEPTEMBER 11: Derek Jeter(notes) #2 of the New York Yankees hits a single to right field in the third inning during a game against the Baltimore Orioles at Yankee Stadium on September 11, 2009 in the Bronx borough of New York City. Jeter's hit was his 2,722nd, passing Lou Gehrig's all-time club record of 2,721. (Photo by Jared Wickerham/Getty Images)

The captain breaks the record at home in what figures to be another pleasant Yankee autumn. The World Series ends in November this year. Ever since a few minutes past midnight in 2001, Jeter’s nom de baseball has been Mr. November.

The postseason is usually a crapshoot. Records involve a certain amount of luck, too. The other great Yankees had their asterisks, so to speak. Ruth was mostly a pitcher until he came to the Yankees. Gehrig was felled by a merciless disease. DiMaggio missed three seasons in the service and burned out before his time. Mantle was hurt, and sometimes was not at his best for other reasons. Mattingly hurt his back and then retired young to try to hold his family together. Williams had a slow start before Torre arrived in 1996 and figured out the sensitive young man could play.

For that matter, Jeter could have more hits than he does. He played 15 games in 1995, filling in for the injured Tony Fernandez, and everybody could see he was a winner, but the organization had its game plan. If it had played Jeter, the Yankees might have beaten the Mariners — unless the Mariners had intuitively used their own marvelous kid, Alex Rodriguez. 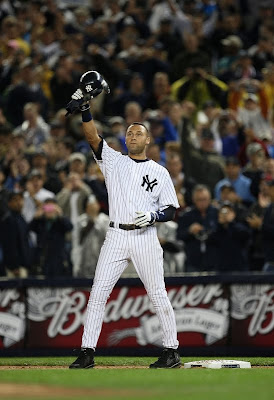 NEW YORK - SEPTEMBER 11: Derek Jeter(notes) #2 of the New York Yankees celebrates after hitting a single to right field in the third inning during a game against the Baltimore Orioles at Yankee Stadium on September 11, 2009 in the Bronx borough of New York City. Jeter's hit was his 2,722 passing Lou Gehrig's all-time club record of 2,721. (Photo by Mike Ehrmann/Getty Images)

Jeter leads by example. When prodded by reporters about some temporary flareup, Jeter fixes those green eyes on the interrogator and says, how do you know what goes on behind the closed doors?

Only rarely does he send a message. In 2002, the team was missing Tino and Scotty and Paulie, had too many transients, yet writers suggested the Yankees had championship experience. “Some of us have,” Jeter said. He sizzled slightly when one Yankee or another was connected to drugs. Not all of us do that, Jeter would say.

For all this, we really do not know Derek Jeter, except by the respectful way he refers to his father and mother and sister. He is single and appears to go out with lovely women, but he seems to be discreet, and amen to that.

We don’t know what he thinks about politics or religion or current events. He sells cars on television — including the commercial in which he insists he is just a salesman, not a shortstop, but the kid susses him out.

He has set the tone for the Yankees, on the field and off. And in the summer he turned 35, he has broken the franchise record for hits, and we all get to watch him play. Clap hands for that.

E-mail: geovc@nytimes.com
Posted by jtf at 7:09 AM