Global meltdown no sweat for Obama

He's all about growing government, not saving the financial system and other countries. 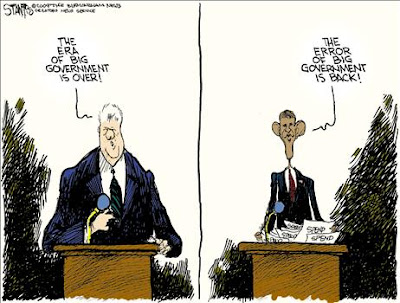 The British Prime Minister Gordon Brown thought long and hard about what gift to bring on his visit to the White House last week. Barack Obama is the first African American president, so the prime minister gave him an ornamental desk-pen holder hewn from the timbers of one of the Royal Navy's anti-slaving ships of the 19th century, HMS Gannet. Even more appropriate, in 1909 the Gannet was renamed HMS President.

The president's guest also presented him with the framed commission for HMS Resolute, the lost British ship retrieved from the Arctic and returned by America to London, and whose timbers were used for a thank-you gift Queen Victoria sent to Rutherford Hayes: the handsome desk that now sits in the Oval Office.

And, just to round things out, as a little stocking stuffer, Gordon Brown gave President Obama a first edition of Sir Martin Gilbert's seven-volume biography of Winston Churchill.

Evidently, the White House gift shop was all out of "MY GOVERNMENT DELEGATION WENT TO WASHINGTON AND ALL I GOT WAS THIS LOUSY T-SHIRT" T-shirts. Still, the "classic American movies" set is a pretty good substitute, and it can set you back as much as $38.99 at Wal-Mart: Lot of classics in there, I'm sure – "Casablanca," "Citizen Kane," "The Sound Of Music" – though this sort of collection always slip in a couple of "Dude, Where's My Car? 3" and "Police Academy 12" just to make up the numbers. I'll be interested to know if Mr. Brown has anything to play the films on back home, since U.S.-format DVDs don't work in United Kingdom DVD players.

It could be worse. The president might have given him the DVD of "He's Just Not That Into You." Gordon Brown landed back in London a sadder but wiser man. The Fleet Street correspondents reported sneeringly that he (and they) had been denied the usual twin-podia alternating-flags press conference. The Obama administration had supposedly penciled one in for the Rose Garden, but then there was that catastrophic snowfall (a light dusting). This must be the first world leaders' press conference to be devastated by climate change. No doubt President Obama could have relocated it to a prestige indoor venue, like the windowless room round the back of the White House furnace in Sub-Basement Level 5. But why bother? Some freak flood would have swept through and washed the Prime Minister and his DVD set into the Potomac and out to the Atlantic. And by the time the Coast Guard fished him out, the sodden classic movies wouldn't work in any American DVD player any better than in the Brit one.

He did, however, get to give an almost entirely unreported address to Congress. U.S. legislators greeted his calls to resist protectionism with a round of applause, and then went back to adding up how much pork in the "Buy American" section of the stimulus bill would be heading their way.

I would make a modest prediction that in 2012, after four years of the man who was supposed to heal America's relations with a world sick of all that swaggering cowboy unilateralism, those relations will be much worse. From Canada to India, the implications of the Obama ascendancy are becoming painfully clear. The other week Der Spiegel ran a piece called "Why Obamania Isn't The Answer," which might more usefully have been published before the Obamessiah held his big Berlin rally. Written by some big shot with the German Council on Foreign Relations and illustrated by the old four-color hopey-changey posters all scratched up and worn out, the essay conceded that Europe had embraced Obama as a "European American." Very true. The president is the most European American ever to sit in the Oval Office. And, because of that, he doesn't need any actual European Europeans getting in the way – just as, at his big victory night rally in Chicago, the first megastar president didn't need any megastar megastars from Hollywood clogging up the joint: Movie stars who wanted to fly in were told by his minders that he didn't want any other celebrities deflecting attention from him. Same with world leaders. If it's any consolation to Gordon Brown, he's just not that into any of you.

What Mr. Brown and the rest of the world want is for America, the engine of the global economy, to pull the rest of them out of the quicksand. Which isn't unreasonable. Even though a big chunk of the subprime/securitization/credit bubble axis originated in the United States and got exported round the planet, the reality is that almost every one of America's trading partners will wind up getting far harder hit.

And that was before Obama made clear that for him the economy takes a very distant back seat to the massive expansion of government it provides cover for. That's why he's indifferent to the plummeting Dow. The president has made a strategic calculation that, to advance his plans for socialized health care, "green energy" and a Big Government state, it's to his advantage for things to get worse. And, if things go from bad to worse in America, overseas they'll go from worse to total societal collapse. We've already seen changes of government in Iceland and Latvia, rioting in Greece and Bulgaria. The great destabilization is starting on the fringes of Europe and working its way to the Continent's center.

We're seeing not just the first contraction in the global economy since 1945, but also the first crisis of globalization. This was the system America and the other leading economies encouraged everybody else to grab a piece of. But whatever piece you grabbed – exports in Taiwan, services in Ireland, construction in Spain, oligarchic industrial-scale kleptomania in Russia – it's all crumbling. Ireland and Italy are nation-state versions of Bank of America and General Motors. In Eastern Europe, the countries way out on the end of the globalization chain can't take a lot of heat without widespread unrest. And the fellows who'll be picking up the tab are the Western European banks who loaned them all the money. Gordon Brown was hoping for a little more than: "I feel your pain. And have you ever seen 'The Wizard Of Oz'?" It's about this sweet little nobody who gets to pay a brief visit to the glittering Emerald City before being swept back to the reassuring familiarity of the poor thing's broken down windswept economically devastated monochrome dust bowl. You'll love it!"

"Frankly, my dear, I don't give a damn"? Oh, perish the thought. The prime minister flew 8,000 miles for dinner and a movie. But the president says he'll call. Next week. Next month. Whatever.