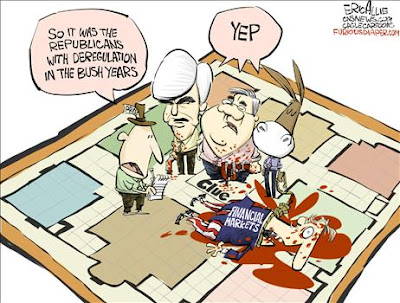 Unfortunately, the future of this country, as well as the fate of the Western world, depends on how many people can be fooled on election day, just a few weeks from now.

The current financial bailout crisis has propelled Barack Obama back into a substantial lead over John McCain-- which is astonishing in view of which man and which party has had the most to do with bringing on this crisis.

It raises the question: Do facts matter? Or is Obama's rhetoric and the media's spin enough to make facts irrelevant?

Fact Number One: It was liberal Democrats, led by Senator Christopher Dodd and Congressman Barney Frank, who for years-- including the present year-- denied that Fannie Mae and Freddie Mac were taking big risks that could lead to a financial crisis.

It was Senator Dodd, Congressman Frank and other liberal Democrats who for years refused requests from the Bush administration to set up an agency to regulate Fannie Mae and Freddie Mac.

It was liberal Democrats, again led by Dodd and Frank, who for years pushed for Fannie Mae and Freddie Mac to go even further in promoting subprime mortgage loans, which are at the heart of today's financial crisis.

Alan Greenspan warned them four years ago. So did the Chairman of the Council of Economic Advisers to the President. So did Bush's Secretary of the Treasury, five years ago.

Yet, today, what are we hearing? That it was the Bush administration "right-wing ideology" of "de-regulation" that set the stage for the financial crisis. Do facts matter?

We also hear that it is the free market that is to blame. But the facts show that it was the government that pressured financial institutions in general to lend to subprime borrowers, with such things as the Community Reinvestment Act and, later, threats of legal action by then Attorney General Janet Reno if the feds did not like the statistics on who was getting loans and who wasn't.

Is that the free market? Or do facts not matter?

Then there is the question of being against the "greed" of CEOs and for "the people." Franklin Raines made $90 million while he was head of Fannie Mae and mismanaging that institution into crisis.

Who in Congress defended Franklin Raines? Liberal Democrats, including Maxine Waters and the Congressional Black Caucus, at least one of whom referred to the "lynching" of Raines, as if it was racist to hold him to the same standard as white CEOs.

Even after he was deposed as head of Fannie Mae, Franklin Raines was consulted this year by the Obama campaign for his advice on housing!

The Washington Post criticized the McCain campaign for calling Raines an adviser to Obama, even though that fact was reported in the Washington Post itself on July 16th. The technicality and the spin here is that Raines is not officially listed as an adviser. But someone who advises is an adviser, whether or not his name appears on a letterhead.

The tie between Barack Obama and Franklin Raines is not all one-way. Obama has been the second-largest recipient of Fannie Mae's financial contributions, right after Senator Christopher Dodd.

But ties between Obama and Raines? Not if you read the mainstream media.

Facts don't matter much politically if they are not reported.

The media alone are not alone in keeping the facts from the public. Republicans, for reasons unknown, don't seem to know what it is to counter-attack. They deserve to lose.

But the country does not deserve to be put in the hands of a glib and cocky know-it-all, who has accomplished absolutely nothing beyond the advancement of his own career with rhetoric, and who has for years allied himself with a succession of people who have openly expressed their hatred of America.
Posted by jtf at 9:43 AM