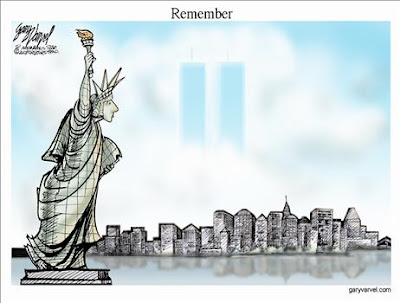 Al-Qaida's media relations department must be seething. Or rather, they must be seething beyond the usual Destroy America/Kill the Jews/Behead the Infidels/Convert-or-Die seething that is their second nature. After years of churning out throat-slitting propaganda videos, investing in the finest video editing software and studio sets, and establishing cozy relations with sympathetic international newspapers and global network news channels, the jihadists still don't get no respect from world opinion.

They are the Rodney al-Dangerfields of global mass murderers.

A poll released this week of more than 16,000 people in 17 nations revealed that "majorities in only nine countries believe al-Qaida was behind the attacks on New York and Washington that killed about 3,000 people in 2001." A mere 46 percent of individuals overall said they believed al-Qaida executed the attacks—despite all the back-patting, fist-pumping video productions from AQ's media arm, al-Sahab, claiming credit.

In 2006, the AQ flacks released tape of Osama bin Laden at an Afghan training camp with several of the 9/11 hijackers. "I ask you to pray for them and to ask God to make them successful, aim their shots well, set their feet strong and strengthen their hearts," bin Laden urged in the sicko promo. In April, another clip showed irate and aggrieved jihadi leader Ayman al-Zawahri lambasting Hezbollah for crediting Israel for the 9/11 attacks. "The purpose of this lie is clear—(to suggest) that there are no heroes among the Sunnis who can hurt America as no else did in history. Iranian media snapped up this lie and repeated it," he griped.

But to no avail. Maybe this is why FBI Most Wanted Terrorist Adam Yahiye Gadahn, the American-born Muslim convert turned al-Qaida publicist, has not been heard from in a while. He's been falling down on the job. Either that or those damned 9/11 Truther conspiracy nuts have surpassed the Islamic jihadis' recruitment efforts on YouTube. Time to hire a new viral violence marketing team.

So, who's stealing the bin Laden operation's thunder around the globe and getting all the blame (er, credit) for the September 11 terrorist attacks? The citizens of the world have cast their vote. Seven years after Mohamed Atta, Hani Hanjour and their Allahu Akbar-screaming team succeeded in slaughtering nearly 3,000 innocent men, women and children, large numbers of our putative allies in the civilized world still blame America and Israel.

"Israel was behind the attacks, said 43 percent of people in Egypt, 31 percent in Jordan and 19 percent in the Palestinian Territories," according to the survey. "The U.S. government was blamed by 36 percent of Turks and 27 percent of Palestinians." The pollsters noted that no prompting was necessary: "These responses were given spontaneously to an open-ended question that did not offer response options."

Among our great friends south of the border, Mexico boasted "the second-largest number citing the U.S. government as the perpetrator of 9/11 (30 percent, after Turkey at 36 percent). Only 33 percent name al-Qaida." Which, of course, is no shock to those who remember when the U.S. soccer team was taunted with chants of "Osama! Osama! Osama!" after a match in Guadalajara four years ago; or when the team was booed again in 2005 and plastic bags filled with urine were reportedly tossed on American players.

They hate us. They still really, really hate us. And it is not all about Iraq. As a Mexican soccer fan told the Christian Science Monitor: "'Every schoolboy knows about 1848. … When they robbed our territory,' referring to when Texas, California and New Mexico were annexed to the U.S. as part of a peace treaty ending the war between the two countries, 'that was the beginning.'"

Not coincidentally, another world opinion poll was released this week that dovetails with the 9/11 survey. While the global community refuses to unite against al-Qaida as a common enemy to humanity, it has decided on who should be America's next president. The BBC-commissioned poll named Barack Obama the world's favorite candidate by an overwhelming margin of four to one. They see in their fellow "citizen of the world" a kindred spirit:

Someone whose former spiritual mentor shares the European elite's "chickens coming home to roost" schadenfreude. Someone who has promoted the need for "empathy" toward the head-chopping jihadists. Someone who shares their fetishizing of terrorists as poor victims of imperialism in need of more "understanding" and "education." Someone who cynically hawks "Buy American" campaign stickers while courting the "Blame America" Left at home and abroad.
Obama is their man. Never forget.