[Aside from the some of the usual left-wing silliness that so often creeps into movie reviews, this is a nice piece on one of my favorite movies of all time. I still have of fond memories of watching it at a drive-in theater when I was a mere lad. - jtf] 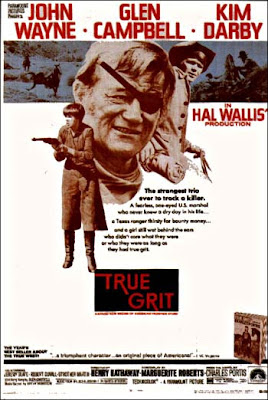 Filed under: Classics, After Image, Western

Before it opened, there was much public mulling over whether Harrison Ford had the stamina at age 65 to play Indiana Jones one more time. Apparently the box office grosses answered that question. It was an irrelevant question, anyway. In those Indiana Jones movies, the machinery is what mattered. Ford was there for the ride, just like the audience. I think what was missing in ...Kingdom of the Crystal Skull is the elegiac qualities of a late period performance ... for example, the aging heroism in John Wayne's last great movie.

True Grit isn't just the sword outwearing the sheath, and the soul outwearing the breast, as Byron put it. It's also about remaining power in an old carcass. Wayne's rallying of that power in the film's memorable duel: blinking his one good eye at the shock of being called a fat old man, he takes his horse's reins in his teeth and rides down four gunmen. The film is often a comedy, with lines worthy of Mark Twain in it; so much so that the emotional content blindsides you. Every film class in the world quite justly talks about the end of The Searchers, John Ford's image of Wayne framed by a doorway, never at home or really at ease. True Grit has a scene to equal it: a gentle if tersely written scene at a snow-covered grave yard in the high country, with approximately the emotional fire power of the finale of James Joyce's The Dead. 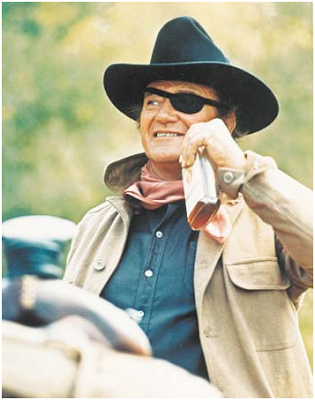 Tom Wolfe claimed that Charles Portis, his colleague at the New York Herald Tribune, was the only journalist he'd ever heard of who had done what journalists always claim they'll do someday. Apparently Portis really did take three weeks off, went to a cabin, and wrote the novel that got him straight out of the newspaper business. Portis' book True Grit was reputedly written with Wayne in mind, but the part of deputy Marshal Reuben J. "Rooster" Cogburn is as juicy a role as Long John Silver. Mitchum or Lancaster could have done it proud; Tommy Lee Jones or Nick Nolte would carry it out now. The movie is very much Wayne's world, though, bringing out the peculiarly musical qualities of his voice, and his gift for understatement and low comedy. Director Henry Hathaway and photographer Lucien Ballard's cameras went to just about the noblest quadrant of the country to film it, Mammoth Lakes in California and Montrose Country, Colorado in the west side of the Continental Divide: high country, lit by the golden shimmer of aspen leaves. 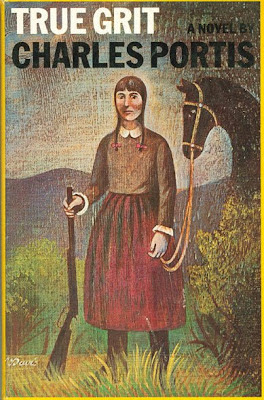 The book is more down and dirty, specific to the river towns, and set in the foothills of the Ozarks and the Ouichita mountains in southeastern Oklahoma. I hate remakes in principal, but there's an anti-western that could be made out of this fine book someday, and it would look a little something like The Assassination of Jesse James...; certainly Rooster's uneasy past as one of Quantrill's men demonstrates that Rooster was a graduate of the same riding academy as Jesse. The Arkansas federal marshal, profane, old, fat and given to whiskey either out of the jug or the bottle, is recruited by one Mattie Ross (Kim Darby). The farm girl's father was killed by a career criminal who was taking some time off, posing as a hired hand. Cogburn is reluctant to go across the border from Ft. Smith, Arkansas into the Indian Nation (later Oklahoma).

Mattie motivates the old man with a $50 reward to bring the villain back alive. While mulling over the offer, Cogburn meets up with a cocksure Texas ranger called LaBoeuf (the musician Glen Campbell), who has the same quarry as Mattie. LaBouef has too much gun, too much spurs and too much self confidence. Mattie insists on accompanying the lawmen into the Territory, despite every discouragement they can muster. The trio braces some squealers (one is Dennis Hopper) by smoking them out of their cabin. Now they're certain that the fugitive is one of the new henchmen of a robber called Lucky Ned Pepper (Robert Duvall), who has previously had his face rearranged by one of Rooster Cogburn's bullets. The ambushers are ambushed themselves, and it takes a gunfight and an ordeal in a skeleton-lined pit of rattlesnakes to set things right. 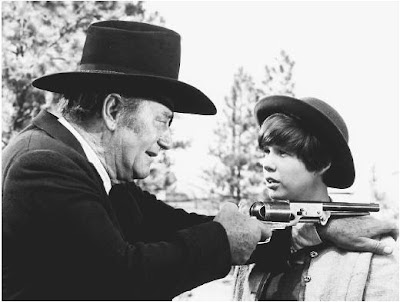 The terrific script by Marguerite Roberts gave Wayne what he called his favorite scene ever, when Rooster tells about his own drifting life running a restaurant up in Cairo, Illinois, in those days before the roughneck in him drove away his wife and his son. In the telling, there's sarcastic humor...and humor will never be respected as much as drama...presumably that's why this moment of Wayne at his finest isn't referred to in film lore, as often as similar moments in The Searchers. The scathing interplay between Rooster and LaBoeuf is true wit, too. It includes my all time favorite cinema warning against Texan self-esteem. After LaBoeuf tells of how real Texas Ranger sometimes have to drink water out of a muddy hoof-print, and be glad to have it, too, Rooster grunts "If ever I meet one of you Texas waddies that didn't drink out of a hoofprint, I'll shake his hand, or buy him a Dan'l Webster cigar." Against Wayne's aura of heroism is always a W. C. Fields like lightness that keeps this stirring film buoyant...as well as autumnal.

Considering the complexity of the emotions Wayne brings up, It's no surprise that his centenary last year went relatively unremarked. (A fine summing up of the actor is Garry Wills' loving yet unsparing biography.) This was true even in the American west, one place where they still revere Wayne with no mixed feelings. But there, the actor's image is often an icon of reactionaries. Images of Wayne's face, the face that in countless movies welcomed strangers to the west, is sometimes used to ward off outsiders. Wayne's legend isn't happily remembered by Native Americans, who quite rightly remember the way Indians were treated in his films. In the 1950s, Wayne fell in with a very bad crowd of politicians and commentators, the kind of spoilsmen and bullies who he once upon a time used to punch out in his movies. 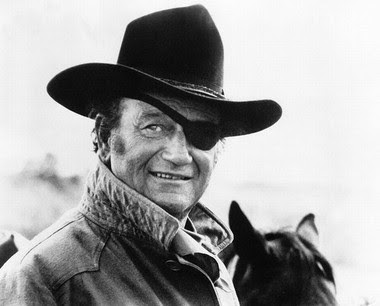 The films Wayne made in the 1960s and 1970s were often dreadful, wearing down his audience. Wayne made True Grit in 1969, but he also made The Undefeated (recently released as part of a box set with the startlingly advanced 1930 Raoul Walsh western The Big Trail). The Undefeated is typical Wayne in decline, lummoxy work that grinds the political axes of its day; watching it in the midst of Vietnam War, it was pretty easy to decode a bit about a Civil War draft dodger getting busted in the mouth for not getting out on there on the firing line. Speaking of Vietnam, Wayne also spent his capital as an actor in The Green Berets: propaganda, and bad propaganda at that (here's New York Times critic Renata Adler hitting the film about as hard as it deserved). Considering Wayne's most careless public pronouncements, I'm not sorry that I enjoyed the Pogues anthem of disappointment "The Body of an American" ("Fare thee well, John Wayne, there's nothing left to say"), or the even far more furious MDC punk-rock tune "John Wayne Was a Nazi". 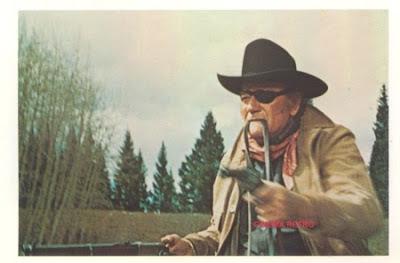 Because of that fury, I'll explain: What people cherished in Wayne is evident in the last moments of True Grit, where Rooster Cogburn is offered a space in Mattie's family graveyard. And the hero explains to Mattie gently that when she grows up, she'll want her husband and family buried next to her. In fact, both of them are a pair of outcasts about to separate for good. The novel was written from the point of view of an independent old single woman. This seems to have been part of the movie, because it seems unlikely, in this summing up, that Mattie will never met a man who could tolerate her own grit, except for one old rogue back in the 1880s.

I was watching this final scene at home with my wife, and we both became quite helpless with tears as Wayne rode away. We would both like to be simple, in the good sense of the word, and good in the simple sense of the word. We'd like to be open, direct and fearless people, but that's not going to happen. We're city dwellers, dealing on a daily basis with more snakes than you'd find in an Oklahoma cave. Straight shooting can't kill what we're up against. Rather, each new day requires more triangulation, and ever more elaborate trick shots. And Wayne's peculiar beauty and common sense appears to be gone forever, too, and we wept for that loss as well.

Unbelievable! I saw True Grit at the Drive-In when I was a kid too...I remember Glen Campbell requesting "The Sin Bin" (didn't knw he played hockey) and proclaiming he "didn't sleep with no morons". That and I had a little crush on Kim Darby...which is disturbing except that I was about 6 years old, if that.
Nice memory! BTW...helluva series by the Pens.

Hi, today is a beautiful day in my life. I saw a first snow in this year and I save this photo for all people in the World!