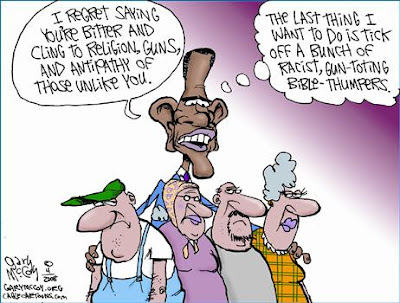 The Democrats' "Fake-Out America" adviser, Berkeley linguistics professor George Lakoff, must be beside himself. Despite Lakoff's years spent training Democrats to "frame" their language to stop scaring Americans, B. Hussein Obama was caught on tape speaking candidly to other liberals in San Francisco last week.

One minute Obama was bowling in Pennsylvania with nice, ordinary people wearing "Beer Hunter" T-shirts, and the next thing you know, he was issuing a report on the psychological traits of normal Americans to rich liberals in San Francisco.

Obama informed the San Francisco plutocrats that these crazy working-class people are so bitter, they actually believe in God! And not just the 12-step meeting, higher power, "as you conceive him or her to be" kind of God. The regular, old-fashioned, almighty sort of "God."

As Obama put it: "(T)hey get bitter, they cling to guns or religion or antipathy to people who aren't like them or anti-immigrant sentiment or anti-trade sentiment as a way to explain their frustrations."

The rich liberals must have nearly fainted at the revelation that the denizens of small towns in Pennsylvania have absolutely no concern for the rich's ability to acquire servants from Mexico at a reasonable price.

We don't know much about Obama's audience, other than that four fundraisers were held on April 6 at the homes of San Francisco's rich and mighty, such as Alex Mehran, an Iranian who went into daddy's business and married an IBM heiress, and Gordon Getty, heir to the Getty Oil fortune.

It is not known whether any of Getty's three illegitimate children attended the Obama fundraiser -- which turned out to be more of a McCain fundraiser -- but photos from the event indicate that there were a fair number of armed (and presumably bitter) policemen providing security for the billionaire's soiree.

In 1967, Gordon sued his own father to get his hands on money from the family trust -- and lost. So Gordon Getty knows from bitter. It's a wonder he hasn't turned to guns, or even to immigrant-bashing. God knows (whoever he is) there are enough of them working on his home.

These are the sort of well-adjusted individuals to whom Obama is offering psychological profiles of normal Americans, including their bizarre theories about how jobs being sent to foreign countries and illegal-alien labor undercutting American workers might have something to do with their own economic misfortunes.

It's going to take a lot of "framing" for Democrats to recast Obama's explanation to San Francisco cafe society that gun ownership and a belief in God are the byproducts of a psychological disorder brought on by economic hardship.

It is an article of faith with the Democrats that they must fool Americans by simulating agreement with normal people. The winner of the Democratic primary is always the candidate who does the best impersonation of an American.

But then, after all their hard work making believe they're into NASCAR and God, some Democrat invariably slips and lets us know it's all a big fake-out. They're like a gay guy trying to act straight who accidentally refers to Brad Pitt as "yummy!"

The Democrats' last phony American (or perhaps I should say "faux American") was John Kerry, who famously said that if "you study hard and you do your homework, and you make an effort to be smart, you can do well. If you don't, you get stuck in Iraq."

Kerry claimed this was not an accurate reflection of his feelings about the troops, despite a four-decade record of contempt for them, including accusing American troops of being baby-killers during the Vietnam War.

Rather, he said, it was a "botched joke." (In Kerry's defense, he was the opening act for Randi Rhodes' stand-up comedy show at the time.) But as with his military records, Kerry refused to allow his joke-writer to release any of the jokes cut from that speech.

In case there was any confusion, other Democrats immediately clarified their position by going on television and saying -- as Rep. Charlie Rangel did -- that our troops are people who don't have the option of having "a decent career."

These Democrats can't even pull off attending a NASCAR race without embarrassing themselves. In August 2004, Kerry exclaimed: "Who among us does not love NASCAR?" And then, about six months ago, Democratic congressional staffers to Rep. Bennie Thompson, D-Miss., sent out a memo urging aides going to NASCAR races to get inoculated before attending.

Obama had been so careful until now, "framing" his message as "change" -- rather than partial birth abortion, driver's licenses for illegal aliens, tax hikes, socialized medicine and abandoning mandatory minimum prison sentences for federal crimes.

His message is "change" -- not that his wife has not been proud to be an American for most of her life.

He is for "change" -- and don't mind the crazy racist loon who has been Obama's spiritual mentor for two decades.

One can only hope that Obama got his shots before bowling in Altoona, Pa.

- Ann Coulter is a bestselling author and syndicated columnist. Her most recent book is Godless: The Church of Liberalism.
Posted by jtf at 5:27 AM